Making the Impossible Decision for Echo

It’s hard to keep a blog when you don’t feel much like writing, because you haven’t got much positive to say. This is a long post, and it sums up what’s been going on in the last month.

A month ago, I was trying to be positive. The Quiessence was helping Echo. His headshaking symptoms were better, but still there. He had started eating at normal times, which made management easier.

But Echo was still in pain. He would bite the barn half-wall or the edge of the water trough and hold it for minutes at a time. He’d bite Cash constantly. He liked to submerge his face in the trough, up to his eyeballs, holding his breath until he had to come up for air. I can only guess that the water provided some relief, since he also likes to have his nose hosed (but now hates having his body hosed, and flings his head about maniacally while being bathed).

So we tried another round of Dex Pulse Therapy, which did nothing for him at all. Then we tried the Cypro and the Carba, which maybe helped his sneezing and snorting a little (which makes sense, it’s an antihistamine) but did not affect any of the other headshaking symptoms.

In desperation, I began to consider doing a permanent block of the branch of the trigeminal nerve that goes to the upper nose. Unfortunately, the block requires general anesthesia, the success rate is less than 50%. In a significant number of horses, the attempted block makes the symptoms worse, and the result is having to euthanize the horse. I even contacted USEF to see if they would allow a horse with the nerve block to compete, but they would not. Given the cost and the risk factors, plus the fact that Echo would not be able to show, we decided that the permanent block was not an option.

I rode him a few times, always in an arena. Under saddle, he rubs his face so hard that he has almost pulled his bridle off several times. I have learned to do up the throatlatch much tighter than usual since having a bridle come off mid-ride isn't safe. He’s gone from being a confident baby jumper to stopping in front of a single ground pole and refusing to go over it, to the point of rearing up and spinning away. He sucks back, tucking his nose to his chest, and he has become very spooky, whereas before he was a pretty cool customer.

Because I felt like I was running out of options and was no longer able to view Echo’s behaviors objectively (that is, green horse issues vs. headshaking issues), I put him in training with Paige, who I take jumping lessons from. We agreed to a two-week trial, so see if he would improve at all. Two weeks is up today, and I’m sad to say that while I can tell he’s been ridden by a pro (he doesn't fall in as badly to the right and he’s more forward in general), the HS behaviors are still there. The scariest one is what Paige refers to as “blacking out,” where he sort travels with his head way up in the air and to the right and just sort of zones out. You can’t turn him or stop him, he’s so focused on the pain in his face that everything else ceases to exist. I can’t even imagine how dangerous this would be if it happened in front of an XC jump, or out foxhunting.

Paige told me that if I want to keep trying, she’s willing to help me, but we could spend huge amounts of time and money and it could go nowhere. Despite being on a whole bunch of drugs and supplements (the bill for that stuff alone is over $250/month), he’s not getting better. In fact, he’s back to rubbing his face so hard that he’s got cuts on his nose and gums. I had hoped that with the shorter days, his HSing might be seasonal and the symptoms would improve, but they are not.

What it comes down to is this:


And then randomly through a Yahoo group, I found another horse owner in Austin who has been managing her HSer for the last 8 years. She kept him at a VERY nice boarding facility, and was able to do a few schooling H/J shows with him. She wrote me this about her experiences (reposted with her permission):

"I feel so much pain for you reading your story and thinking back over my years of heartache trying to manage Ian's HS.  I spent so much money trying everything under the sun.  Once his HS was "managed" I spent a ton of money on body work etc to undo whatever was probably already there and whatever all the tension from the pain caused.  I certainly saw amazing results and had a horse I loved to ride, but in hindsight, my choices in how to manage him leaving no stone unturned because I couldn't bear to see him in any pain, the money I spend trying everything under the sun plus keeping what did work going did which was 10s of thousands over the 8 years, going to the barn to take care of him every single night, not riding in lessons most of the year because I only rode him after dark which also then meant I rarely saw my husband during the week because I'd be at the barn until 10pm all seem pretty crazy.

I know I kept going with Ian long after anyone else would have and if I'd decided to put him down I knew any of my friends would have done it long before me, but I look back and can't believe what I went through and what I did for him every single day for 8 years.  I honestly was relieved in a way when his vision started to go [and I had to retire him].  He was still doing great and fun to ride but I just couldn't do the constant maintenance anymore.  Had I known he could live outside in retirement I would have retired him a long time ago. However, it's possible he wouldn't have done so well in retirement a long time ago.  His HS was the best it had ever been when I retired him.  That "best" still required a lot of effort and money.  I look back and wonder what life would have been like if I'd put him down before I committed much of my life to trying to make him well.

One of the hard things with HSers is that you know for some horses the solution is simple so it feels like if you just keep trying, you'll find that thing that makes your HSer better.  And if you quit, what if there really was a simple solution and you just didn't find it.  So many HSers seem to be really talented and wonderful horses too.  It's torture and if I were giving advice to a friend 8 years ago with Ian, knowing what was in store, I would have advised that friend to quit trying and put him down to end his pain.  I physically had the money to spend but never would have imagined just how much I would sink into maintaining him and in hindsight I think I would also advise a friend to not only end the horse's suffering but it's not worth the emotional and financial cost.  I love Ian dearly and can't imagine my life without him but the cost, in so many ways, has been significant.   Obviously I didn't take that path I would advise and it's easier to give that advice than take it but I'm glad to hear you are being realistic about the possible outcome. There is no easy answer.  My research does tell me this condition can be extremely painful.  My opinion is that when Ian is snorting and wiggling his nose, that is not pain, but when he flicks his head or flings it, that is pain and when he flings his head so hard his feet come off the ground, that is significant pain.  So I tried to keep that in mind when I was trying to get his symptoms under control and had decided he would not spend another summer suffering. "

Y’all, that’s what Echo and I have ahead of us. I just can’t do it, and I can’t put Echo through that.

So, I have decided to donate Echo to the University of California at Davis. He’ll be shipped out there in the next 7-10 days. Dr. Madigan and his team are doing ongoing research on headshaking, and Echo will be part of their research program. It’s likely that they will observe him and run tests for a few weeks, and then he will be PTS. My hope is that he will be able to contribute in some way to further the knowledge of this awful disease, and of course, that one day soon he’ll be able to run in the great golden pasture pain-free.

I am honestly not sure what to do in the meantime. I had thought to take some pictures, but like with Saga, I want to remember him when we had our blue-ribbon “winning” day at our first h/j mini show, instead of now with cuts on his face from rubbing. Every time I see him I cry, so that’s hard too. I just feel kind of lost and adrift and sick to my soul.

My poor little Echo-Gecko. I am so, so sorry we couldn't help you. 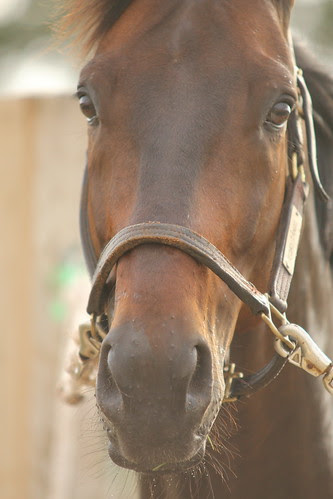