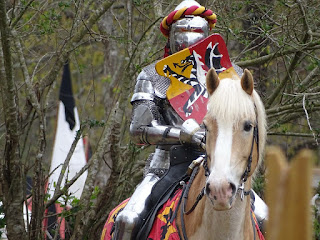 Paddington Bear. He's a 14.3 hh registered Haflinger gelding, and we brought him home the week after my birthday in October 2013. I swear we weren't planning to buy a horse, but he was super fun to ride and adorable. He hates dressage, but is the best jousting horse ever, and loves violence of any kind. He's also a professional treat moocher. 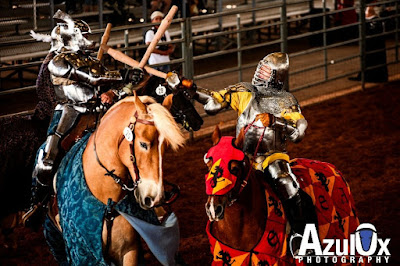 Reddums is the teeny fierce one on the right


Red, a.k.a. Reddums or The Feerless War Pony. My husband's first horse,  a 14.2 hh purebred Missouri Fox Trotter gelding. He's a cute little booger, if a tad bit... um, short. But he jumps, does lovely dressage, and will pack you around foxhunting all day long. However, his favorite activities are doing mounted combat (he can take on an 18hh horse and win) and eating things he shouldn't. He's also quite a mischievous little guy and an endless source of entertainment. He's now retired and living the good life. (Photo courtesy of Azulox Photography)

Gryphon, aka Griffy, Grifflinger. 15.1 hh Haflinger gelding. He was supposed to be a jousting horse, but decided he's happier in the sandbox. He super fancy but freshly dragged arenas are his arch nemesis! 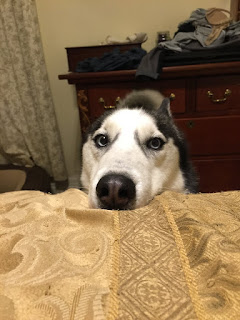 Logan, aka Tiny Dog (ok he's tiny in comparison to Gus). A rescued husky who loves butt scratches, salami, and stealing toothpaste. Good thing he's cute! (Also yes he does have earz, just not in this pic) 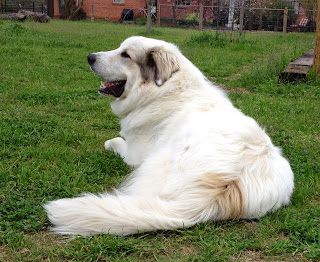 Augustus, our Great Pyrenees guardian dog. AKA Gus, Gustav, The Floof. Gus is from the local Pyr rescue, and is kind of a weird Pyr. He doesn't dig and he doesn't jump fences, plus he comes when called (mostly) and sits (usually on your foot). He's an excellent guardian dog and makes sure that no packages are ever dropped at the door and no joggers come on our side of the street. Oh and he keeps the coyotes away too. Sometimes he steals shoes. 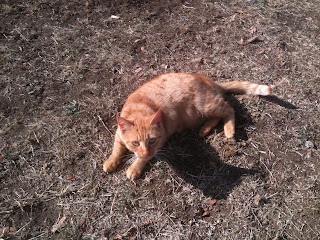 Maddy, a.k.a. Maddy-moo, The Mooster, Moo. We brought her and Artemis home in October 2010. She is Ms. Purrer and is usually parked in someone's lap. 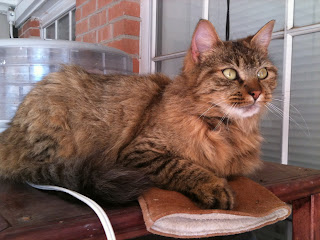 Artemis, a.k.a. Shopcat, Arti-moosy. We brought her and Maddy home in October 2010. She is quite the huntress and enjoys leaving the remains of her victims in my hubby's workshop so he will know and love her hunting prowess. I am quite sure he's fond of these little 'presents'. 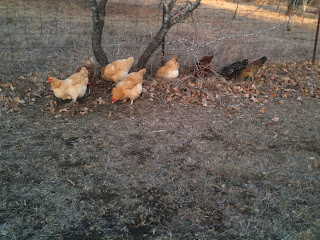 We currently have a bunch of laying hens and enjoy an endless supply of fresh eggs from them. 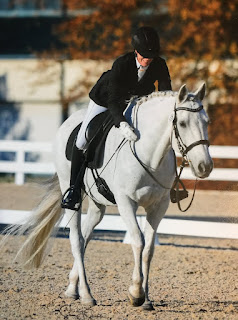 Taran, the Wonderpony. Actually my BFF's horse, I pulled him out of the pasture in December 2015 because I was desperate for something to ride. He ended up taking me to USDF Nationals and a Bronze medal, despite struggling with Cushings. We lost him to colic in September 2019. 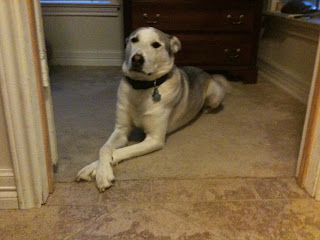 Elias, our Malamute mix, a.k.a The Malamutant, The Dog. He was the best boy, and we miss him terribly. 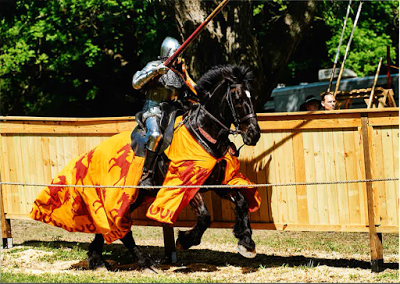 Brego, aka The Berg, Berglet. 16.3 3/4 Percheron gelding. Brego Internet-famous as the star of The Eventing Percheron blog, which was run by his previous mum. We brought him to live at Wyvern Oaks in September 2014, where he proceeded to run things by dint of his huge size and even bigger personality. He foxhunted and was a star jousting horse.  We lost Brego on October 19, 2016, after a long battle with recurring abscesses from a coffin bone infection that nobody knew he had. 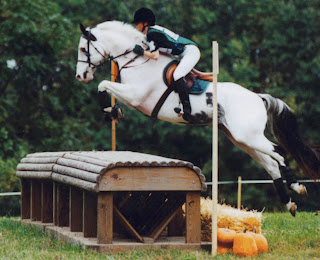 Cash, a.k.a. Monseiur le Spot, The Spotted One, Schpotted Pony, etc. my Cash was my first horse, a 15.2 hh Paint gelding. In his heyday, he competed and won at Training level HTs and showed 2nd level dressage (schooled 4th). This picture was taken of us going Training in 1999. He could fly, but was grounded by age 11 by a permanent injury in his left hind. He went on to be a dressage schoolmaster and taught many people to ride. We said goodbye to him on September 29, 2016, at the ripe old age of 28. 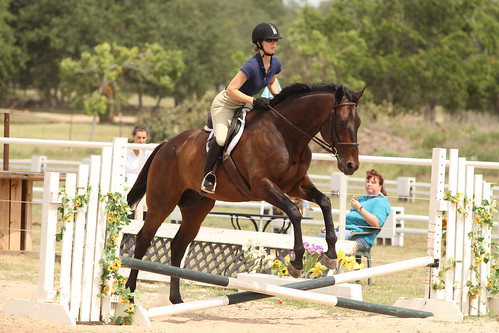 Echo, a.k.a. Gecko, or Baby Racehorse (BRH). My Adopted Horse mom helped me find him in Florida, and he was the horse of a lifetime.  He had more talent and movement than any horse I've ever owned or probably will own, but his career was sadly cut short when he was diagnosed with Headshaking Syndrome. We tried so many things to manage his symptoms, but the bad days were so awful that he couldn't even eat. Pasture retirement wasn't an option as sunlight made his symptoms worse. We sadly decided that a life of pain was no life at all, and donated him to UC Davis for their research program on Headshaking. I hope that some day they will find a treatment for this horrible disease, as it's absolutely heart-wrenching and devastating.  Echo left us in October 2013. (Photo courtesy of Lauren Muldin)

Oberon, a.k.a. Bo, was my husband's second horse. He was an excellent jousting horse and fox hunter, and taught my husband a lot in the year that we had him. Sadly, he succumbed to a sudden bout of gas colic that resulted in a flipped and twisted intestine. He left us July 14, 2013.  (Photo courtesy of The Jousting Life) 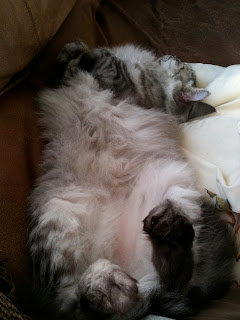 Freya, a.k.a. The Furbisaur. She left us in April 2013, after a short struggle with mouth cancer. You can read her final post here. 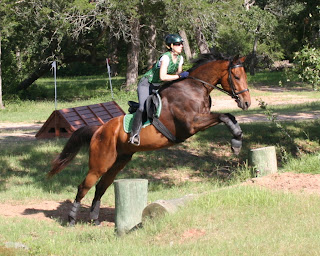 Saga was a 16.2 hh, 2001 registered AQHA gelding. In his past life he'd been a racehorse, a trail horse, and the part of a rodeo half-time show where he jumped cars (yes, seriously, cars). He was a big, goofy, in-your-pocket kind of guy - kind of a lug, but very sweet. We mostly foxhunted but did some eventing too, and just about the time things were going well, he hurt himself in the pasture. We never knew exactly how he did it, but after months of stall rest and care, it became apparent that he wasn't going to heal and we could not manage his pain. We let him go January 14, 2013. 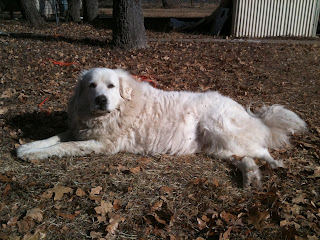 Anie, our Great Pyrenees, a.k.a The Great White Poof-i-nees. We found her on Craigslist in November 2009, thin and covered with mats. We nursed her back to health, but she was an old girl when we got her and had bad hip problems. Although she was only with us until June 2012, she was an excellent guardian dog and fiercely protected Wyvern Oaks.