Update on the state of affairs

Sometimes, life really gets in the way of doing the things we love, like blogging. I've been holding down Wyvern Oaks solo for the last 6 weeks, because my husband has been off in Mexico doing this:

Here's the link to the Washington Post article, and the one from NPR, and the BBC. If you thought my husband was cool because he jousts, his day job is even more amazing.

As usual, all the shit happens when he's gone. The dogs have started fighting, we had a tree fall down on the fence, and the painters accidentally knocked the hose loose from the washing machine so I flooded the laundry room. 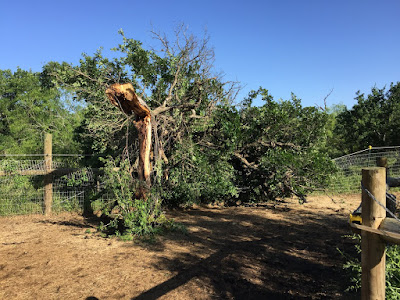 Brego started to show signs of another abscess just days before hubby left, and we waited for it to blow but it didn't. 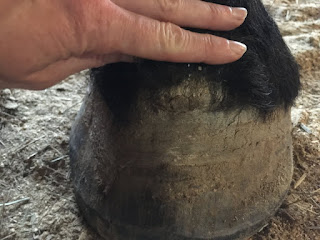 When it didn't blow after two weeks, I had the vet out. When it still hadn't blown 10 days later, she came back, this time with the hospital farrier, and they took xrays to see where everything was located. 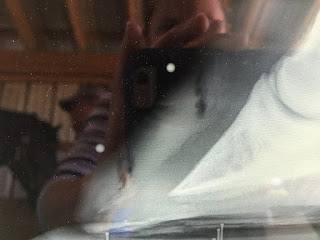 See those two dark lines going down from the hoof wall? Those are TWO rather large pockets of infection.

Roughly an hour of (unsedated) digging later, and we were left with this: 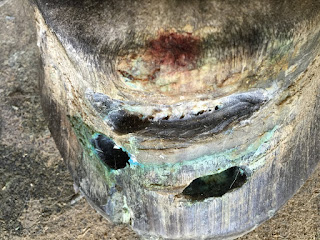 They think that he had a white line infection somewhere deep in his foot (although the bottom of his foot is currently fine, so we had no way of knowing), and that the abscess last year didn't clear out the whole thing. The hole on the bottom right of the picture goes through to his sole (you can stick a shoe nail through, gag), and if you look in the big hole across the top you'll see a bunch of smaller holes. Those are all infection tracks. I'm flushing everything daily with betadine and copper sulfate, and actually can stick a needle in each of those small holes and flush them. Y'all, holes in horse feet are SO WRONG.

And I know it's crazy, but Brego has been sound this entire time and is currently out galloping around like a nutcase, despite the swiss-cheese-like appearance of his foot. Vet and farrier will be visiting every two weeks together until we get this all cleared up and grown out. Fun times.

As for Paddy, he's doing fine. He's mostly being neglected, because I spend all my time riding Taran. I did have a great ride at my trainer's barn where he wanted to go zooming at the trot but I made him do nothing but laterals... eventually he decided that was too hard and started behaving himself. It's funny how riding another horse lets you figure out how to ride your own horse that much better. 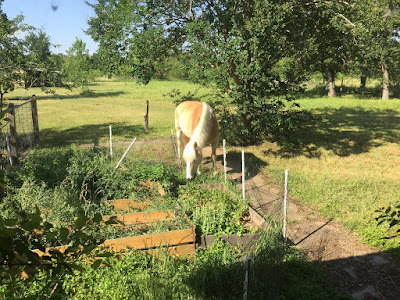 When not being ridden, he helps me eat weed the garden.

Taran continues to be a rockstar. Seriously, I don't know where this amazing little horse came from - he just keeps getting better and better, a little bit every day. 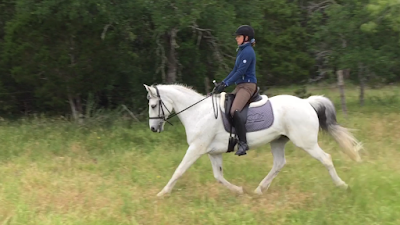 Let's ignore the fact that I'm being left behind and focus on the amazing trot, ok?

We went to our last show of the spring season this last weekend, a 2-day recognized show here in town where we did 1-2 and 1-3 both days. We spent all weekend getting 2nd place behind a lady on her very nice confirmed 3rd level horse. Interestingly, the judge on the first day didn't seem to like Taran much - we put in two solid tests and we got decent enough scores (64% and 62%) but it wasn't as good as I expected. The second day, we had a new judge at C, but the same judge at E. The judge at C scored us 2% ahead on 1-2, and only .2% behind on 1-3, but the judge at E scored us 5.5% and 3.5% lower. The judges scored within 1% of each other for all the rest of the folks in my class, so it really was just me. Her comments were perfectly reasonable and spot on, but it just seems like the scoring was harder for us. Oh well, I have that judge's name and we won't ride for her again if we can avoid it. We still managed to get a qualifying score on 1-3 for the SWDC and GAIC championship rides (65.5%), so we're now basically maxed out on everything we can do at first level (Taran needs 1 more score for a Performance Award, but we'll get that this fall). Time to think about moving up to Second! 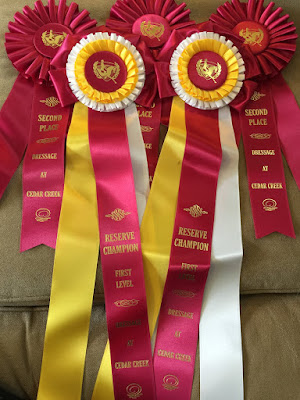 Also, have some adorable pet pictures, because I have them: 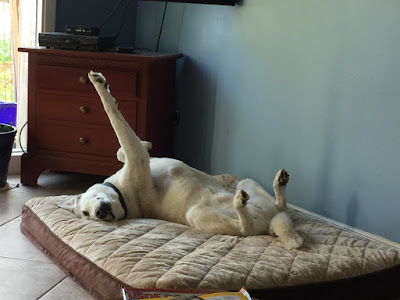 What happens when you fall asleep mid-stretch. 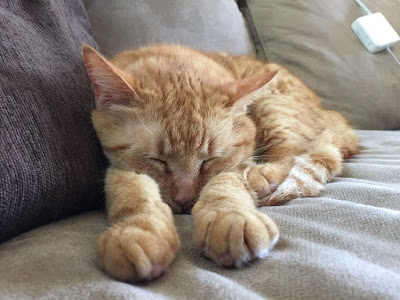 Not sure when I'll get back to regular blogging, but hopefully sometime soon. Hope y'all are well!
Posted by jenj at 3:07 PM 42 comments: