With Taran in full training, I don't get to ride him very much because he's 2.5 hours away. But I go crazy if I don't ride (ask my poor husband), so I've been putting some time in on Griffy in the last couple of weeks.

He's a bit of a tricky ride - he's quite sensitive, but he also has that bull-headed Haflinger streak. So I'll do something like switch my whip hand and he'll simultaneously go "EEEK" and then use it as an excuse to grab left rein and try to take off. I can shut him down pretty quickly, but I do have to be more situationally aware with him than with Paddy or Taran. He also looooves to lean and will happily get into a pulling match if I let him. Maybe this is a Haffie thing because Paddy is a pro at this move. 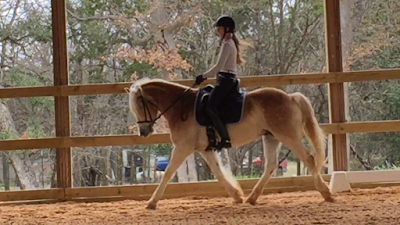 Getting a leeetle leany here - If I ask for just a titch too much trot, we lose the balance. It's a fine line.

The coolest thing about Griffy is how balanced he can be and how much he will go off my seat. I start every ride with a lot of walk/halt and then walk/trot transitions. He starts off ignoring my seat, but about 5 minutes in he starts listening. The reins become almost unnecessary as he becomes buttery off my leg aids, and I feel like I'm riding a well-tuned little pretzel. Right up until the point where one of us gets a little quick or grabby and then it all falls apart. But at least I know where we can go!

Right now we're mostly working on balance and tempo and me carrying my hands (see above with the pulling). Taran isn't really a leaner or a puller, so I'm having to re-learn how to correctly use my core to resist the Haffie lean. Maybe this time it will stick? 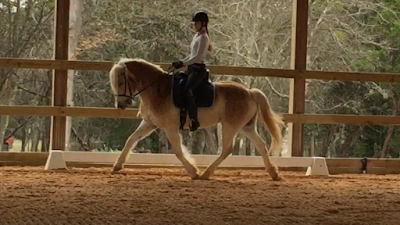 
But let's be real

Griffy's canter transitions are... interesting. They really feel like nothing, but he's hugely expressive about them, even with a very small ask. And when he's super balanced, his canter feels like riding a cloud. Taran's canter is nice (especially now), but Griffy's is a whole other level. 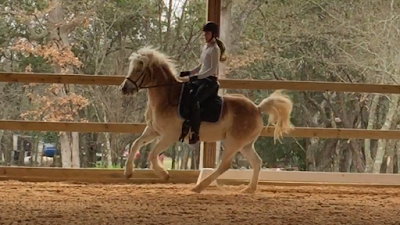 I barely asked, I swear

In the canter, I have to focus on really following with my seat and sitting UP to sort of hold him to a balanced canter, with just minimal support from my hands. Lots of inside leg helps, but no so much that he's leaning on my leg. Sometimes picking the inside hand up (NOT back) helps get him off the inside rein and gets him to rebalance himself, but doing it while cantering is still tough for both of us.

I'm excited to be riding this guy - he's really a lot of fun, and as always every horse teaches you a lot. I know he's supposed to be hubby's next jousting horse and all, but uhm... maybe he's more cut out for dressage? 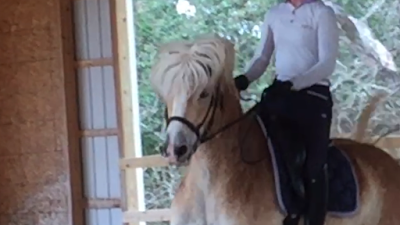 Especially given this on point bouffant .... FAHBULOUS
Posted by jenj at 9:10 AM 18 comments:

At the beginning of the year, I had a long talk with my trainer about how we were going to get changes on Taran. I have no experience with them, and neither does he. Although our first few attempts were successful, I didn't feel like I had the knowledge or confidence to put correct, clean changes on him. So, we decided it would be best to put Taran in full training for a few months to get him going.

Apparently he's doing great with them, but my trainer is kind of terrible with video. I have several videos of her talking her WS through the setup, then T canters out of frame and I hear her squeal "YES! THAT WAS AWESOME!" while I see nothing but arena wall or dirt. So um, yay awesome horse?

Anyway, a side benefit to being in full training is that all his gaits have improved 100%. He's so straight and through and supple and STRONG, it's like I'm riding a whole new horse. And MAN, he loves to do half pass, both at the trot and canter. And riding a move that your horse loves to show off is just pretty amazeballs.

The way half-pass was explained to me was to ride across the diagonal, look at the letter you're going to, and then ask for haunches in. I know there's more to it than that, but for a beginner version it's working for me.

Uhhhnnfortunately, some of us are not as good at half pass as our horses are. The theme here is "let's lean to the outside"... 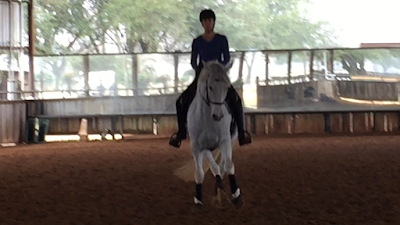 I do not think my right shoulder should be 4 inches lower than my left. 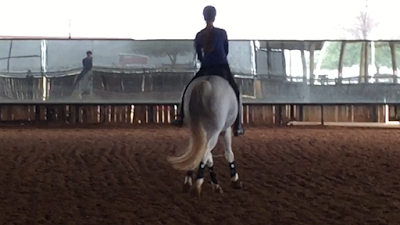 Nor should my left shoulder be 4 inches lower than my right. At least I'm consistent? 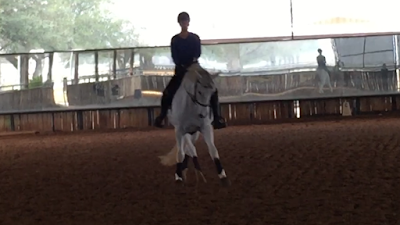 Also whatever my left hand is doing, it's doing without my permission. 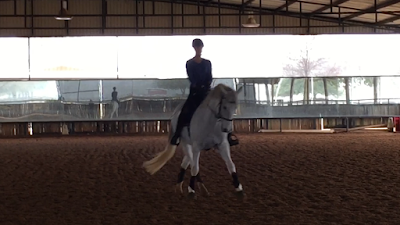 Either the camera angle is hiding my flaws, or someone yelled at me to SIT UP. Either way, my horse is a saint for carrying on despite less than perfect working conditions.


Moral of the story: sit UP, weight on your inside seatbone, and for heaven's sakes keep your hands down. Taran will do the half pass with or without me - I just need to position him, ask, and then STAY OUT OF HIS WAY.