Quite Possibly the World's Only Jousting Haflinger 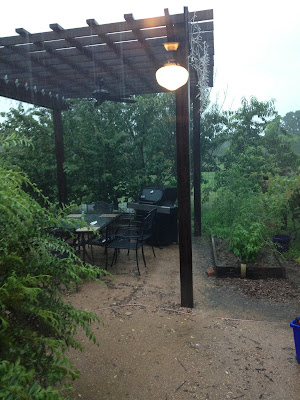 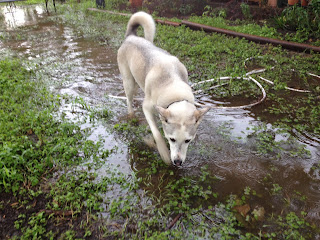 I almost had to by floaties for the mutant dog, who can't swim very well.

And then Brego went 3-legged lame and proceeded to blow out the world’s largest abscess.
Seriously. It’s over 2 inches long. 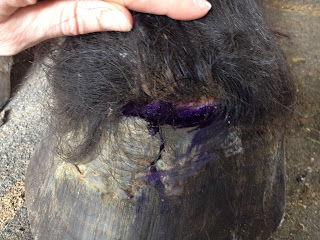 I'm good with blood-dripping wounds, but something about holes in horse hooves makes me gag. 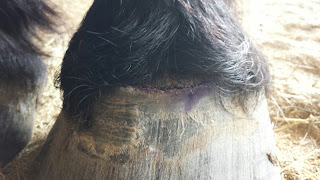 Two visits from the vet, some rads, and a $300 pair of custom front shoes later, and Brego still wasn’t sound. The consensus was that the shoes helped the bruising on the bottom of his foot, but that it would just take some time to grow out the abscessed area up near the coronet band. Unfortunately, hubby had a big international jousting tournament and benefit June 13-15, with a week of practice beforehand. Brego got better each day, but he still wasn’t 100%, and there was no way we were going to joust a horse that’s NQR. We had a backup jousting horse lined up, and then another jouster’s horse blew out a suspensory.

So two weeks before the tournament, Paddy got requisitioned as a jousting Haffie.

It was a big risk. His last experience with armor (the week after I got him) did not go well. I’ve cantered him up and down a jousting lane a few times, but never against another horse, with armor, or with lances. He’s never done mounted combat, except when I used him as an attack platform when we were working on Brego. In other words, he was pretty much a dressage Haffie.

Turns out, I might need another dressage Haffie, because Paddy is pretty much the best jousting poneh EVAR. 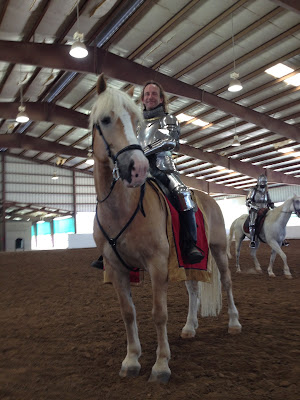 This is his attack face.

So here's my jousting Haffie:

Paddy positively stole the show. He was calm before the runs, launched beautifully, ran straight, and stopped neatly at the end of every run. He actually did better than some of the seasoned jousting horses that have been doing this for years!

On Friday, the first official tournament day, we had a bunch of school children in the stands. They all asked each horse's name, and of course they all recognized Paddington Bear from the movie. Every time he was up for a run, the kids would chant "PAD-DING-TON! PAD-DING-TON!" They all wanted to pet him after, and Paddy obligingly stood for lots of photo ops. All weekend, we had people come up to us and tell us how adorable he was, and he schmoozed for cookies for all he was worth.

This is his favorite person in the whole wide world to mooch cookies from. Meet Holly.

Funny story about Paddy and the cookies. Hubby was up for a joust, but didn't know which end of the lane he was supposed to start from. We were all waving and yelling at him, but the jousters can't see or hear very well when they have their helms on. Suddenly Holly yelled "PADDY! COOKIES!". Paddy's little ears swiveled around, locked on to Holly, and he promptly dragged hubby across the arena (to the proper side) to Holly so that he could get a cookie. Yes, my horse will apparently do anything for a cookie.

Oh, and Paddy was by far the smallest jousting horse there: 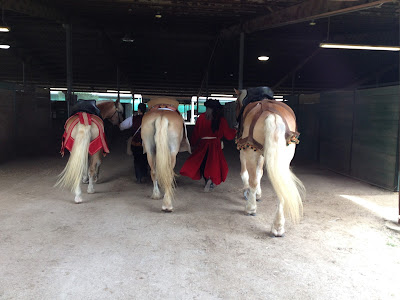 He's the one on the left. 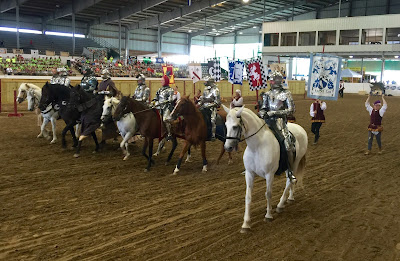 Paddy also participated in the mounted combat melee, which his is apparently awesome at. The video below is a bit long, but it's got some cool action!

The entire event was to benefit SIRE, a theraputic riding program in Houston, Texas. We had the privilege of meeting a number of very special individuals who clearly love horses just as much as we do, if not more. We also had the help of the most amazing volunteers I've ever met - we even had our very own squire for the entire weekend! They really made the weekend so much easier and special for us. We were also very honored to be able to help raise money for such an amazing organization, and we really hope to do it again next year. Paddy will be there for sure! 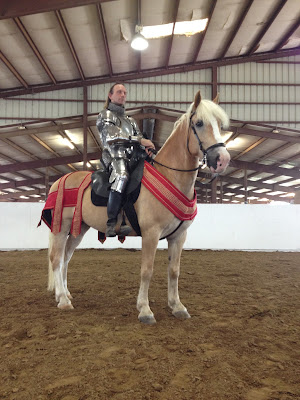