Anybody going to be at the Ohio State Fair on August 1st and 2nd?

Hubby got invited to a joust at the Ohio State Fair this coming weekend! We're hauling Paddy and Brego up for the big event and we'll be there August 1st and 2nd.

The jousting events will be held in the Taft Coliseum start at 10 am on Saturday and noon on Sunday. In between I plan to go to the Campfire Texting Challenge, the Gladiolas show, and the Giant Squash Carving competition. (No, I'm not making this up, check out the schedule.)

Anyway, if anyone happens to be in the area and wants to come meet Paddy and Brego (or me and hubby, although we're much less exciting), and check out the jousting, please stop by! 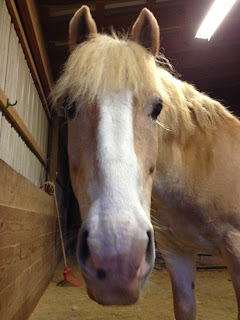 You know you want to meet this face in person!

Chai is the nectar of the gods

If you've ever met me in person, you probably know that I have a very serious addiction to really like chai. 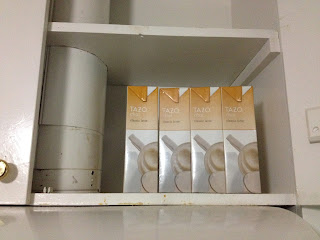 My chai stash. See how the top shelf is empty? My supply is getting low, only four boxes left... gotta restock soon!

Some people like coffee, like my dear darling poor misguided husband. But my palate is more refined... the perfect combination of sweetness and spice, blended with the delicious creaminess of frothed milk... pure perfection, AND it contains caffeine. What more could one possibly ask for? 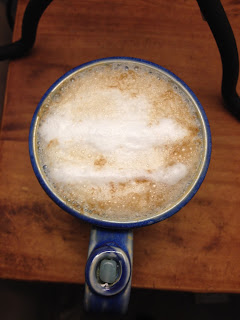 Best way to start the morning. See the equal sign in the foam? Hubby made this one for me on the day Ireland's vote for same-sex equality passed.

The only good part about hubby liking coffee and me liking chai is that we don't fight over who gets the last cup of anything. He can keep his coffee and that way I get ALL THE CHAI. We do, however, share Lucia, his Italian girlfriend. She's our in-house barista... 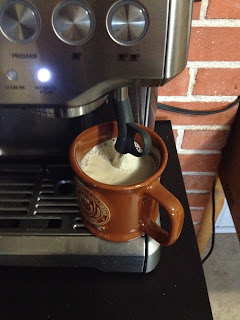 I generally have a cup first thing in the morning, and then bring a jar to work as well. 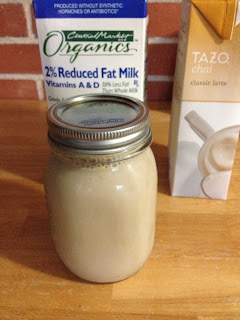 Don't judge... I used to bring an entire quart.

If I want another cup in the afternoon, I always have at least one bag in my purse. In case of emergencies and all. 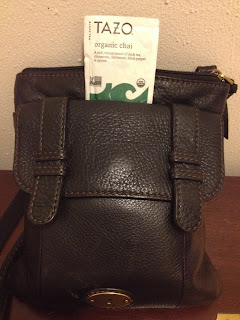 You're judging, aren't you.

Sometimes my preference of beverage becomes a bit of a problem. In some foreign countries, coffee is the prime means of caffeine delivery. Therefore, it's important to carry one's own supply of chai. 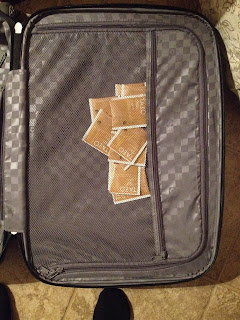 Even the TSA officer is judging me.

And in case you're thinking that this is all a little over the top, I assure you that I can quit at any time. Just... not today, mmmmkay?
Posted by jenj at 7:24 AM 31 comments:

People talk about having a "bucket list" - things they want to do before they die. I've never really had such a list, but there are three things I've always wanted to try on horseback that I've never done, and one of them is riding on the beach. On our recent vacation to France, we were invited by a colleague of my husband's to go on a beach ride. Everyone in their family rode, and we were both SUPER excited.

This is how I imagined our ride:

Things got off to a bit of a dubious start. The horses were well-kept, but the tack had seen better days. I carefully checked our girths and billets and figured they were sturdy enough for a nice trail ride. I was warned (in French) that my mount could be strong and liked to toss his head. Oh, and he was quite young, was that OK?

I've ridden enough trail horses to be relatively confident that I could stay on, and generally those horses know their jobs way better than I do. In those sorts of situations I'm pretty content to just be a passenger, and let the horses follow nose-to-tail. I don't need a well-trained dressage horse to enjoy the scenery.

We climbed aboard and started our ride through the French countryside, which is GORGEOUS. I quickly found that "strong" was a bit of an understatement for my horse - the brakes were almost nonexistent. So I just used the time-honored tradition of using the horse in front of me for braking, which worked well enough. Things were going along nicely until our guide led us down a cliff.

Image stolen from The Man From Snowy River, because I'm pretty sure this is what it looked like.

Now I should point out that we take the boys out trail riding at least once or twice a week. But our trails are nice double track and fairly flat. We also don't gallop up or down rocky hills (who am I kidding - we only *really* gallop when fox hunting). But apparently in France on beach trail rides, they do this all the time.

Eventually we made our way down to the beach. We were warned that the horses would get quite excited once we got on the beach because they knew it was time to gallop. What we didn't understand was that this meant they were quite likely to bolt off down the beach... which is pretty much exactly what happened. My horse jumped down the last section of trail onto the beach, slammed into the guide's horse, then spun while I tried to hold him until we got onto the harder sand. And then he just threw his shoulder sideways and bolted off down the beach at a flat-out gallop. I had little steering and no brakes, so I grabbed mane and held on.

The beach we rode on. The trail you see on the bottom left is the one we took down to the water. Not my picture, because I was too busy holding on to take pictures. Also, I didn't have the camera, which turned out to be a really good thing.

There's a point in a horse's speed where you as the rider simply cease to exist. They are going flat-out and running for the sheer speed of it. I've hit it when foxhunting, but always when asked and always on horses that I'm familiar with, so I knew I could eventually bring them back.  With this horse, I had no such assurances, and it was pretty mind-numbing. Fortunately, he knew to stop at the end of the beach!

We regrouped after the gallop and began to trot back up the beach, but my horse was having none of me trying to control him. Rather than fight, I kept him in knee-deep surf and just let him trot it out. Note to self: When trotting a 14.2 hh horse in relatively deep surf, wear a swimsuit instead of your nice full-seats!

I figured that when we were trotting to the end of the beach and would then head back home, but as my horse got more and more antsy, I realized that we actually might be in for another gallop. I guided him to slightly shallower surf so I could ask the guide, and was told that yes, we would gallop again. I told our guide that I didn't want to do so, and hubby at this point also said he didn't want to gallop again. Suddenly, my horse (who had been dancing and spinning as we were talking) spun again and bolted back off down the beach.

Then my right rein broke.

I've had this happen once before, with my own tack - the hook stud came out and the rein failed. Fortunately, it was in an arena and we were just trotting, so I had turned the horse into the arena fence. Obviously on a huge beach, I had no such fence, nor was I on a horse that I felt like I could stop or even steer much.

So I did the only thing I could think of, which was to pull as hard as I could on the remaining rein - which pointed him out into the water. When he was about chest-deep, I kicked both feet out of the stirrups and bailed.

I will say that it was the softest landing I've ever had, lol!

The rest of the group managed to pull up down the beach, and my horse ran to his herd. Unfortunately, he then played a game of keep-away, which resulted in my husband chasing him on foot, one rider being left on the beach holding two horses, and the guide and one other rider spending the next 30 minutes trying to catch my horse. Eventually they managed to find him, we regrouped, and we all made it back to the barn.

So, there you have the story of my bucket-list beach ride. I'm glad we got the chance to do it and am grateful to my hubby's colleagues for setting it all up, even if it certainly didn't turn out quite the way I had imagined! I think the moral of the story is to be careful what you wish for... oh, and make sure the person who has the camera and the car keys stays dry!

PS. Anybody got any tips for getting salt water out of leather?
Posted by jenj at 6:09 AM 33 comments: