This year has gotten away from me. I felt so organized back in January, filling out the calendar with all our travel and events and shows and jousts and family things.

And then there's that moment when you look at your calendar and feel completely overwhelmed, and realize that something's got to give. And for me, one of those somethings has been blogging.

I've been riding lots though, and this weekend was the first show of the year. I was supposed to already have 3 shows done and gone, but see above-mentioned crazy schedule. The venue is our favorite, in San Antonio, in part because everything is covered but mostly because there is a FABULOUS restaurant right next door with awesome margaritas. Important detail, right?

I'd signed up at the last minute because they had some slots left, and it had become apparent that another show I had planned on doing wasn't going to happen because of other scheduling conflicts (*&!@&^ calendar). So I felt kind of unprepared - we haven't set foot at a rated show since Championships early last October, and we were tackling second level for the first time ever.

I really should start believing more in myself and in my horse, because it was quite literally the type of show weekend I've only thought other people, with fancy imported horses, get to have.

First up Saturday morning was 2-1. I'd had a tense warmup Friday night (because OMG SHOW), but Taran's bodyworker, who also takes lessons from the same GP trainer as I do (and happens to be an FEI rider herself), kindly took some time to talk me down from the ledge and reminded me to breathe. She was actually on hand for the rest of the weekend with pointers, and I'm pretty sure she's why we did so well.

When I went down centerline the first time, I had a HUGE smile on my fact. I WAS RIDING SECOND LEVEL. For real. I knew we could do it, and I focused on riding a clean test. We had three mistakes (one blown canter lead and we broke after both medium canters because if I sit too hard in the canter, T thinks I mean walk), but we also had some really nice moments. We left points on the table when I didn't halt for 3 seconds before the rein back, but we also scored an 8 on the centerline and had a lot of 7s for the canter work (?!?!?!). Our final score was a 61.5 for second place (out of 3, .4% behind 1st). And it was good enough for a bronze medal score. 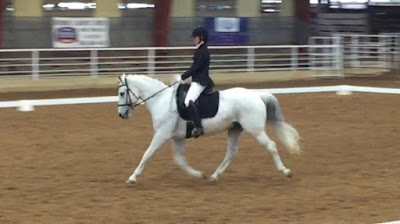 
After that success, I was able to relax even more. Saturday afternoon had us doing 1-3 for the 12th time, but I had hubby read the test because a) I haven't done that test since October and b) I can NEVER remember that damn test. T was feeling a bit tired, but we held it together and only had one mistake (another break after lengthen canter). Overall though, it was a smooth, clean test, and I made the final halt knowing it was the best 1-3 we've ever done, regardless of what the judge thought of it. 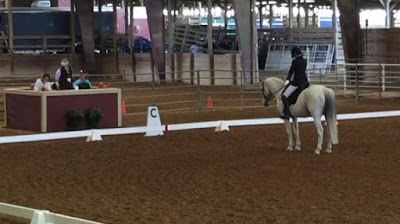 Final halt and salute. This got an 8.


I was right - final score was a 69.295%! That got us our second qualifying score for 2017 regional Championships, and it also clinched us 1st place for 1-3 adult amateur. We even squeaked out a Reserve Champion AA First Level ribbon. I picked up my satin and glassware (not going to lie, I love glassware prizes), and thought I'd had just about the most perfect day ever. We topped off the awesome by visiting with horse show friends, and then hubby and I had an amazing seafood dinner. Horse shows are even nicer when you have The World's Best Horse Show Husband (TM). 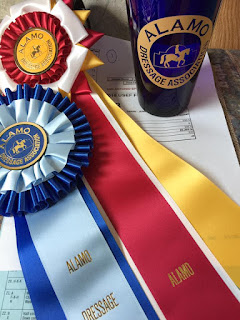 Sunday morning dawned dark and stormy, with a bonus Tornado Watch throughout most of central Texas. Fortunately, my first ride of the day was just after the leading edge of the front moved through. Other folks were not so lucky, and one of the arenas lost power so dressage tests were ridden in the dark. At least the entire facility was covered! 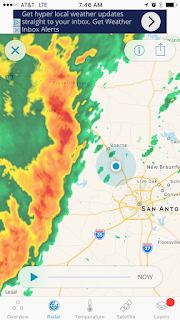 I was determined to ride a mistake-free test this time. I'd spent some time thinking about my medium-collected canter transitions, which are a big struggle for me, and what I could do differently. We practiced a few in warmup and I had a very clear sequence in my head - inside leg, sit TALL, and FLUFF THE REINS. I went down centerline again with a smile on my face, because I knew we were going to rock it. Our trot work wasn't as good as the day before, but the test was mistake-free and I was really pleased with how solid of a ride we put in. Sure, we are leaving points on the table, but we'll get better at it the more we do it.

This time, the judge was a bit more generous and gave us a whopping 65.6%!!! And damn, I am proud of this test. I can't even believe this is the same horse I was riding a year ago.

Unfortunately, we had a 5 hour wait until my 1-3 test. I considered scratching because T and I were both tired and we didn't need the score for anything, but I also really to see if we could break 70. We put in a very short, conservative warmup, and then I went out and rode the test like I was riding a second level test - way more uphill and collected than I normally would. We had a couple of transitions that weren't where I wanted them to be (canter at C was early and it would be great if T would actually halt at X long enough for me to finish my salute) but otherwise I was very, very pleased with it. Even the medium to collected canter transitions felt good!

I was putting away stuff in the trailer when the results showed up online, but I heard this screech from Taran's stall area and hubby yelled across the parking lot "SEVENTY THREE POINT SIX!!!!" I wasn't even sure I'd heard him right, so I checked my phone... yup, a 73.676%. SHUT THE FRONT DOOR. That's a lifetime high for me, y'all. I've never even done that well at a schooling show!

Since I'd scored so well but both my divisions were the last of the day, I decided to stick around for the finals, and I'm sure glad I did. We ended up getting first place for both 1-3 and 2-1 in the AA division, AND we got High Point AA for both first level and second level. 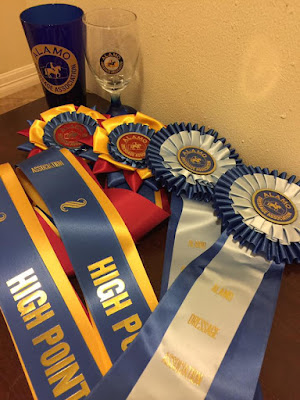 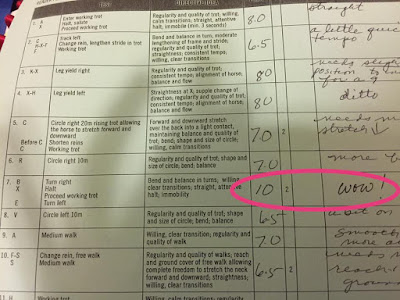 I actually grabbed the poor stranger next to me, hugged her, and shoved my test in her face exclaiming "I GOT A TEN!" Sorry, whoever you were, and thanks for understanding my excitement.

So that sums up my fairy tale show weekend. Normally, when you watch the 70+ rides, they're on very fancy horses. I honestly never though we'd be able to score that well, no matter how good of a test we put in. I guess I was wrong. Apparently my little (borrowed) homebred pony, who's spent most of his life being a lawnmower, is more awesome than anyone ever knew. 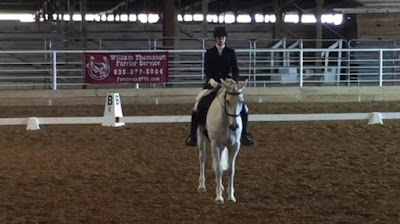