As pretty much everyone in the world knows by now, last week's winter storm was rather rough on most of Texas.

I'm a rabid weather-watcher, so I knew 10 days out that we were going to be in for some very rough weather. I had hay and extra grain delivered, stocked up on pet food, and made sure our pantry and fridge was stocked (although since the start of the pandemic, I've never let anything get too low, so it wasn't a huge thing).

The forecast as of Feb 12. It ended up being worse.

With the weather supposed to roll in the night of the 14th, we spent the 13th covering some of our young trees, refilling the water trough, and adding extra layers of wrapping to the pipes. We also harvested everything possible from the garden, and ended up digging up the citrus and olive trees we'd planted in the fall, since we were pretty sure they wouldn't survive the single-digit temps we were supposed to get. 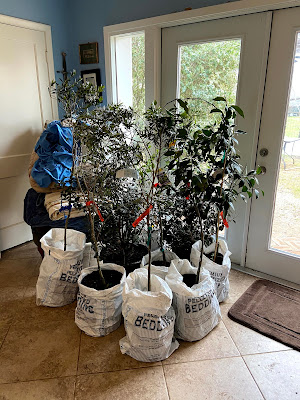 Plants relocated to the den 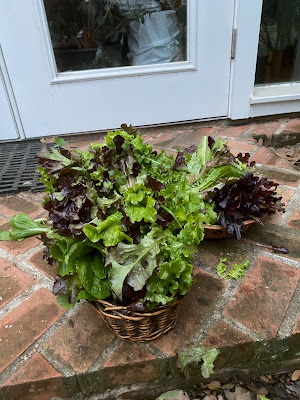 So much lettuce.
We spent a nice Valentine's day with some steaks and a bottle of wine, and went to bed feeling pretty prepared. 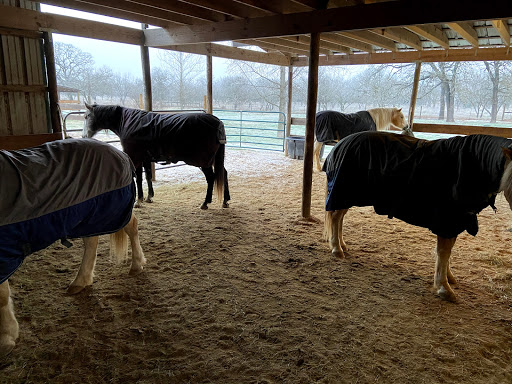 Everybody happy and blanketed.
HAHAHAHAHAHAHAHAHA.
Monday morning around 2am the power went out, and it stayed out until midnight Wednesday (almost 72 hours). We woke up to a house that was barely 40 degrees, along with frozen water pipes. There was nearly 6 inches of snow on the ground. 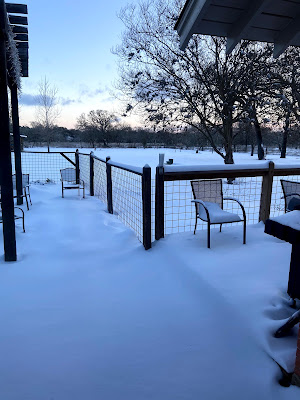 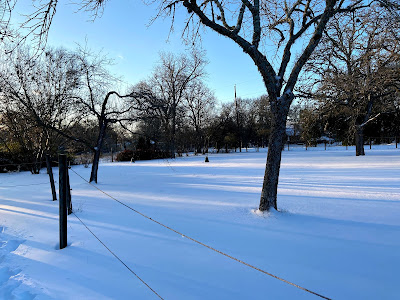 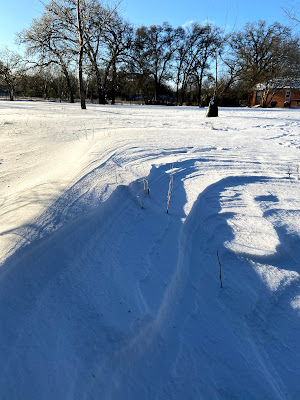 We had actual snow drifts that were over a foot high. 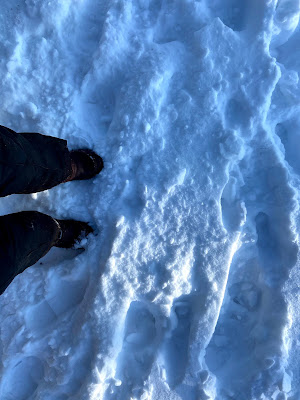 I knew there was a reason I owned these really expensive Thinsulate Ariat winter boots. They saved my life. 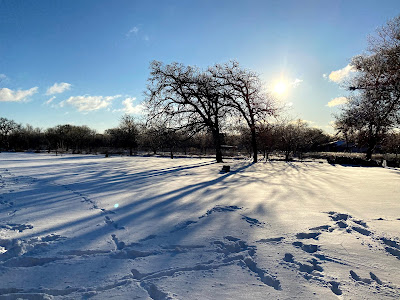 This would have been way prettier if it hadn't been 10 degrees out. 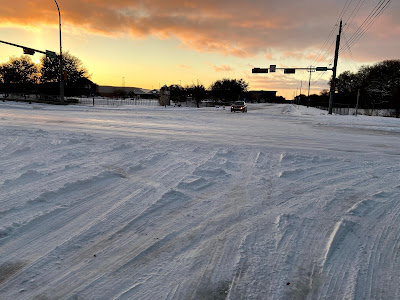 The intersection near our house. Note that we have no snow plows, no way to salt or maintain the roads at all, so after this we just had a 2 inch sheet of ice for a few days. Folks with no water/electricity/heat had no way to go anywhere because it was too dangerous to travel. 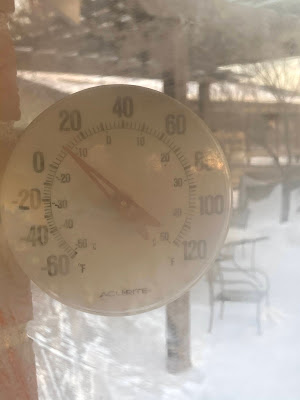 Canada can keep their shit weather next time, K?
We were so, so lucky to have a gas stove and a wood-burning fireplace, plus almost a cord of wood stored. We were able to share the wood with two of our neighbors, and they shared water. It's really great to have neighbors looking out for each other. 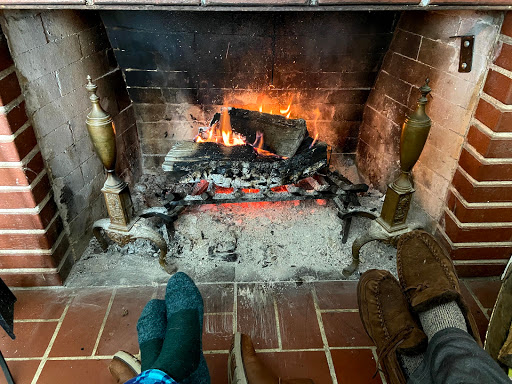 Literally roasting our toes in the fireplace.
We moved our bed into the den, so we had one "warm room" in the house where we packed ourselves and all the animals. Sadly, our fireplace is not built for heat output, so it was only 48-50F a few feet from the fire. The rest of the house stayed barely above freezing, but our little cottage got below freezing and stayed there (spoiler alert: this did not work out well for the pipes). 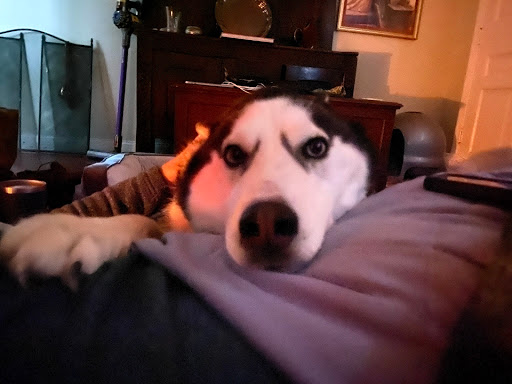 Since our bed was on the floor, the "no dogs on the bed" rule was temporarily rescinded and a certain someone took full advantage.
We almost immediately switched to a "farmer's schedule," up and down with the sun. Turns out there's not a lot to do when there's not power, and staying up past dark meant burning candles or using valuable battery power. For much of the power outage, our phones weren't working because the towers were down. We could occasionally get texts in and out, but no data.
Funny story - at one point on Tuesday I tried to start the truck, since it has an onboard generator (and also heated seats). This is when we learned that nobody down here puts additives in the diesel in the winter, so the fuel had gelled. Internet Frondz (you know who you are) tried to help diagnose the problem, and one helpful suggestion was to light a fire under the truck. Pretty sure that voids the warranty though, so we didn't try it. It started up just fine Wednesday when it reached a balmy 31 degrees.
Like many others, we ended up scooping snow for the animals and collecting meltwater off the roof, because there was no other source of water. 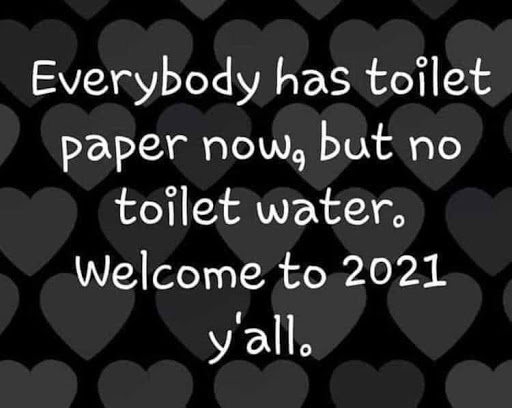 Yup.
As of today, much of Austin is still under a boil water notice, but luckily it has been lifted from our part of town. 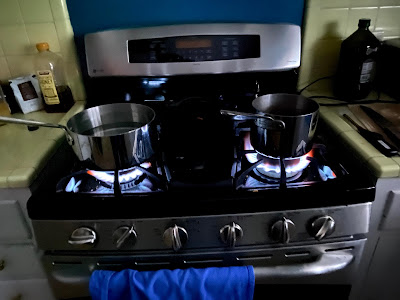 I'm so thankful for this gas stove, since we were able to have hot food and share it with the neighbors. 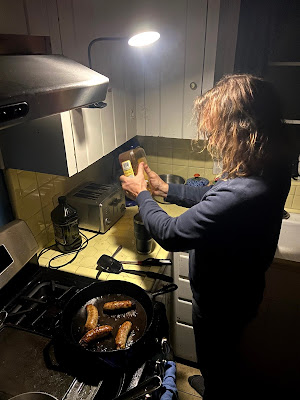 Pro tip: If you're going to make hot toddies during a snowpocalypse, use the 32 oz Yeti mug. This advertisement brought to you by a USB rechargeable clip-on reading light, which was SUPER useful to have.
At least someone thought this was fun. 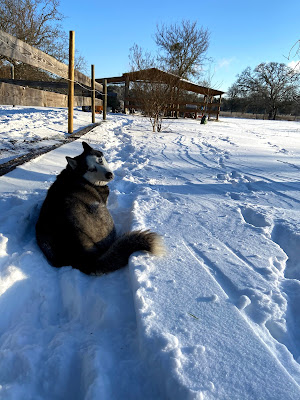 Would have liked to borrow his coat pls.

All in all, the horses did fine. They kept eating and drinking, despite the frigid water (we had a tank heater, but with no power it was useless). We put a jollyball in the tank to keep the top layer from freezing, and that actually worked pretty well. They got to be out for part of the storm and seemed just fine, although I did discover that my 10+ y.o. blankets that faithfully get washed and waterproofed every year are no longer actually waterproof. We had to play musical blankets a little but everyone stayed toasty. Wednesday we had a little melting and then everything turned into a skating ring, so they stayed in after that. So other than going stir crazy, they're OK. 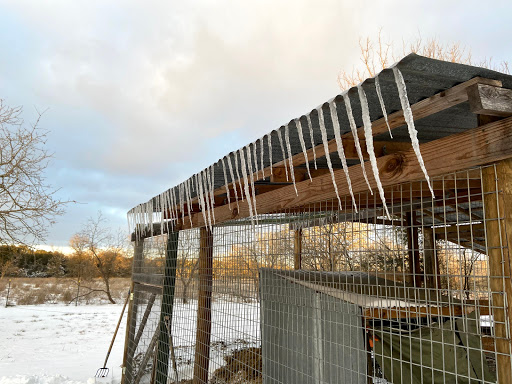 We put blankets around the chicken coop to keep the wind out, and took boiling water out to heat up the chicken's water because the entire bucket would freeze solid in a matter of hours. They mostly stayed in their coop for the duration, but were also fine.
We also played a fun game of "fridge/freezer are too warm and our food will spoil so let's put everything outside but not for too long or else the stuff from the fridge will freeze." The ice cream stayed outside for the duration. 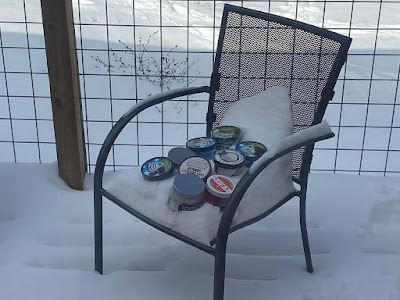 We finally got power back after almost 72 hours (I'm sure by now everyone has heard about all the fun with ERCOT and the $10,000 power bills, so I won't go into that). Unfortunately, much of Austin had major water line bursts, so we didn't get water back until Friday, and then we got to play a fun game of "what's broken where." Despite having turned off the water and draining the pipes, we ended up replacing the kitchen sink, bathroom sink, and shower faucets in the cottage. We also replaced a cracked galvanized cold water line with PEX line, which was an extra adventure because there are no replacement parts to be had ANYWHERE. We're not great plumbers in the best of times, so jury-rigging replacement plumbing was even more fun. And no, we couldn't call a plumber because there were plenty of folks with problems WAY worse than us (burst lines in the attic) and the response time for plumbers was understandable weeks out. We also blew three spigots, since frost-free spigots are not a thing here. Luckily we were able to just cap those and will fix them later. The biggest loss was our tankless water heater, where the copper exchange cracked. We were EXTREMELY lucky to snag a replacement on Saturday - it'll hopefully arrive on Wednesday or Thursday and then we'll install it ourselves (see above lack of available plumbers). Until then, we're taking showers at my BFFs house. 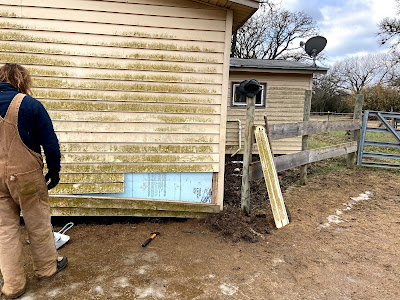 Ripping off the back wall of the cottage to get at the broken line.
Today the snow has melted and all we have to show for last week's disaster is no hot water. And we are one of the lucky ones - we had some heat, we had a way to cook, we had food and water. Even so, it was exhausting and not an experience I hope to ever repeat. We are for sure going to make some changes around here to be more resilient, because the odds seem good that something like this will happen again.
For now, I'm just grateful that it's 80 degrees out and I'm not huddled literally in the fireplace to stay warm. 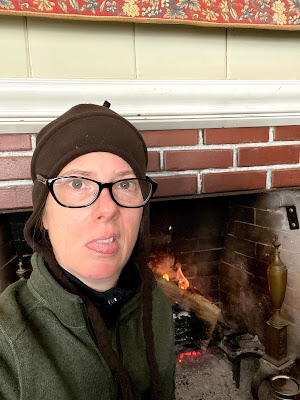