Headshaking - Moving in the right direction (we hope)

I know, it’s been a while. I could use the excuse that I was on vacation, but that would only be partly true. Initially I didn’t post because I didn’t have any good news to share, and then it was because I was afraid to jinx things. So here’s what we’ve been up to:

The last time I posted, we were about to try low levels of Dex to get Echo’s HS back under control. His symptoms were as bad as they’d ever been. Well, we tried the Dex (4 mg on Aug 5, and 6, then 8 mg on Aug 7 and 8), and it had absolutely no effect (in contrast, he was almost symptom-free after the first dose of the Dex Pulse Therapy). Echo continued to be unable to eat at dinner, as well as flicking his head and jerking. 8 mg of Dex was the max my vet wanted to try, so we discussed plans B, C, and D.


I started the people-grade Mg on August 5, and the Quiessence arrived on the 9th so I discontinued the Mg then. We also changed up Echo’s feeding schedule – he was getting more and more frustrated about not being able to eat dinner, pawing, walking around, and generally being (understandably) pissy. So, on the 6th I gave him a flake of alfalfa at dinner instead of his grain, and after a moment of hand-feeding, he dove right in and polished off the entire flake. Since then (and it’s been two weeks), we have been 100% successful in getting him to eat a flake of alfalfa at dinner time, and then eat his grain between 9 and 10 pm, when it’s dark and we do night check. It’s not the easiest schedule to deal with, but it’s working and he’s eating.

By the time the Cypro and Carba arrived on the 14th, Echo had been eating well for week and the flipping symptoms had gone away entirely. I consulted with the vet and we decided that the massive doses of Mg were doing something, and to hold off on the big drugs unless we absolutely needed them. It’s now been about two and a half weeks since we started the Mg, and we seem to be in a steady place. Echo eats, and the worst of the symptoms have gone. He’s not flipping, rubbing his face frantically, snorting, or sneezing. However, he is still chewing on wood and the water trough, and when he’s having a bad day, he’s very aggressive to Cash and Red. Cash currently looks like a chew toy, poor man, but when Echo’s feeling OK, they are BFFs and eat out of the same dish. It’s sort of an abusive relationship.

On the 8th, another lady in Austin whose horse was also recently diagnosed with HS kindly came out and tried some very gentle massage techniques on Echo. I’d noticed that because of the jerking and flipping, Echo had developed a very odd set of muscles on his neck, and I figured he was probably pretty sore. Unfortunately, we had to take off his Guardian mask to do the massage, and in less than 5 minutes his HS symptoms started to appear. It’s hard to know whether it was the sunlight (it was early evening) or the fact that we were working on his poll and neck that caused the symptoms to appear, but they were quite strong and sudden. We put his mask back on and worked on his butt and shoulders instead, which he seemed to like. I should probably do an actual experiment and take off his mask during the day to see if the symptoms reappear so quickly, but frankly, it’s hard to do anything that I think will cause his symptoms to worsen. 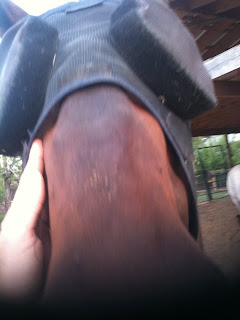 Guardian mask - what all the cook kids are wearing.

I actually took Echo on a short trail ride on the 10th, and other than trying to bite Red (a relic from his racing days, I think – he tries to bite any horse that’s next to him), he was pretty good for not being ridden in almost 5 weeks. We had two episodes of head-rubbing, but if that’s the main symptom under saddle, then I’m OK with that. Yesterday (the 20th), I longed him briefly for the first time in 6 weeks, and while he was quite zoomy and didn’t want to pay attention, it went well enough. No sneezing, snorting, or any other symptoms. Of course, it was dusk so the light was very low, but still, it’s a start.

My plan right now is to continue light work and try to get Echo legged up again. I was looking at some videos of our last lessons, and thinking how we had some nice moments. It would be nice to get that back and improve upon it. I am also going to talk to my vet about trying another round of DPT. Echo’s symptoms are much better, but the fact that he’s still chewing on things tells me that he’s still uncomfortable. If my goal is to keep symptoms manageable, I’m there, but if my goal is to make him completely comfortable, we've got a ways to go. And I really don’t want him to be miserable.