One of the reasons we bought Wyvern Oaks was because of the miles of trails right out our back gate. Unfortunately, I didn't feel 100% comfortable taking Echo out on those trails without a buddy, so I haven't gotten much trail ride time in the last 6 months. But Paddington has tons of trail miles under his belt, and I trust him, despite only having owned him for a month. I never realized how much I missed the freedom of just being able to head out for a quick, relaxing ride, but man, it's awesome. 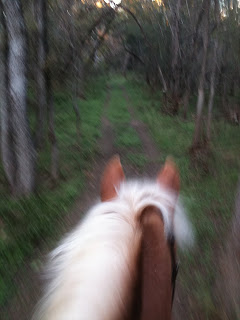 Crappy blurry picture taken about 30 seconds before things got exciting.

The other night, Fuzzypony and I were riding on the trails to the big arena, which takes about 20 minutes to get to. Paddy was walking on the buckle with Taran behind him, when all of the sudden two full-sized Great Danes came careening around a curve of the trail. They slid to a stop practically under Paddy's nose, snapping, lunging, and barking at him. My heart stopped and I clutched the reins, expecting Paddy to spin and bolt for home. With two huge dogs about to attack us, it certainly seemed like a good idea to me!

Instead, Paddington stopped dead and eyed the dogs suspiciously. I considered hopping off in case he decided to leave, but decided that if the dogs made good on their threat to attack, the safest place I could be was on Paddy's back. I took the opportunity to yell in my meanest voice, "NO! NO! BAD DOGS! BAD DOGS!" in hopes that would keep them back long enough for their owners would show up. Did I mention the dogs were off leash and had no recall? Yeah, that was awesome.

What seemed like a million years later but was probably only about three seconds, the dog's owners appeared and grabbed their dogs. Y'all, those Danes were HUGE, and they growled and barked the WHOLE TIME. I apologized for yelling at their dogs, they apologized for their dogs. Paddington stood until I asked him to move on, tense but obedient. I told him what a good man he was and how brave he was, and he carried on like he faced down dogs like that every day.

We've ranted about this a million times, so I'll make it a million and one. If your dogs have sucky recall, DO NOT LET THEM OFF LEASH. What if they went after a jogger, or a child? I get it, the Danes may have been in "attack" mode because they'd never seen a horse before, but even if I had been on foot, I would have been SUPER intimidated by a 150-lb bouncing, barking off-leash dog. And I'm a dog person!

We scored the jackpot with Paddington. He's cute, awesome and brave, and I owe him. 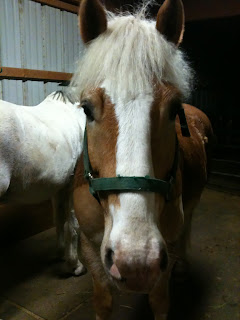