Movin' on up (to First Level)

After our awesome showing at Training 2 and 3 (let's ignore my senior moments, TYVM), a couple of people asked if I'd thought about moving us up to First Level. I admit, yes I've had that thought, since it's really the next logical step.

(Caveat: I suppose the next REALLY logical step is to show him at Training at a recognized show - because face it, a schooling show and a recognized show just aren't the same thing. Maybe we could try to qualify for the regional USDF Championships? But I'm not sure that the year-ends are my goal here. Maybe? There are plenty of recognized shows I could go to, but they are quite pricey, and I really need to think about WHY I'm attending them if I'm going to go. That question isn't yet resolved, so I'll focus on moving up instead.)

Anyway, I sat down and checked out the first level tests earlier this week. Let's just say that we currently have NONE of the pieces needed to put together a first-level test. Sure, we can trot 10 meter circles and canter 15 meter circles (really!), but I'd never even considered asking Paddy for a lengthen  trot or canter, both of which show up in all three tests. Heck, I've spend nearly every ride trying to slow him down, not asking for more! First level also requires a leg yield both directions, and while he's great to the left, he still sort of gets stuck going right.

Oh well, I guess that gives us plenty to work on, right? 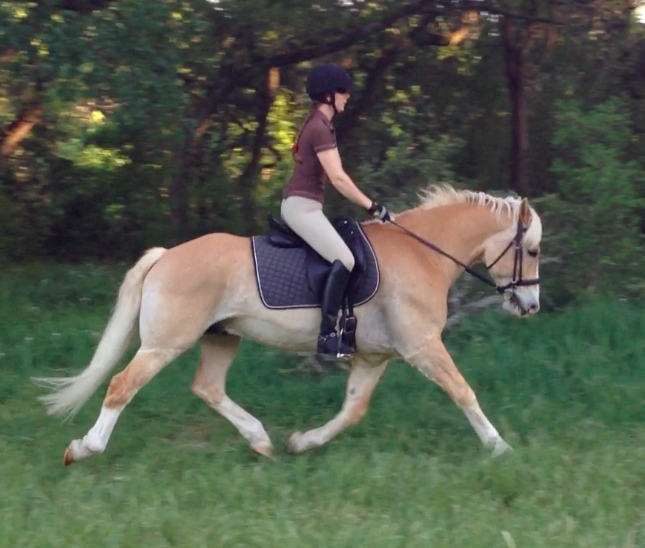 That being said, this is not a bad lengthen for a first try. Go Haffie Power!