This weekend was our second ever USDF rated show. Going in, I was really worried about our canter - we've been struggling a LOT with it (for ever and ever, but more since the last show), and of course about our obedience overall. At the last show (same venue), Paddy figured out that he could run things once we got into the arena, and I really didn't want a repeat of that.

So my goals for this show were:


The short version is, we did all that. Every test got better, I beat my own personal record by quite a bit, and we ended up High Point Adult Amateur on Sunday! Truly, I could not have asked for a better weekend or better rides. Yay Paddy!

We arrived late Friday afternoon, and I settled Paddy in while my Amazing Husband parked the trailer and set up the camper. I hopped on for a bit of a school, and I'm really glad I did. The MOMENT we got into the arena, he tried to take over - even so far as to try his buck-and-bolt canter transition in one corner (he did this at the last show, it was special). I shut that down quickly (and tried not to pull), and insisted that he pay attention. We ended with some very good trot work and called it a night. 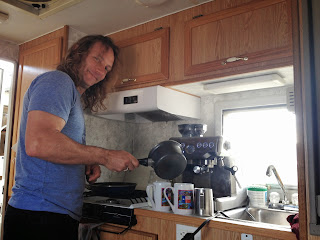 In case I haven't mentioned it recently, I have the best husband in the entire world. He's making me chai in our camper. Ok, he made me THREE chais. Truly, he loves me.

Saturday I didn't ride until 1:10 p.m., so I had time to do all the things I hadn't bothered to do all week. I cleaned tack, washed Paddy's socks, braided, and trimmed his bridle path and tail. Truly, this is the worst-prepared I've ever been for a show, but whatever. He didn't go into the arena looking like he was completely unloved, although I don't shave legs, ears, or noses (I know, the horrors. My horse lives outside and we have bugs. Nobody complained that he looked like a hairy yack, so whatever.) My braids turned out lots better this time, thanks to many youtube videos and Austen's advice. Hooray! 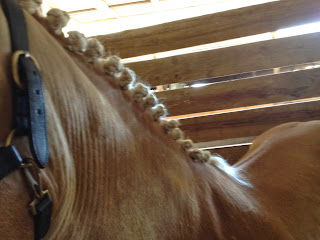 As our first ride time approached, I got more and more nervous. Poor Paddy and poor Hubby had to put up with me being SUPER tense. Of course, I made Paddy tense too, and he's not exactly the most relaxed of creatures. Still, my focus was on obedience, and our test was nothing if not obedient. We got dinged for not being forward and having impulsion, but he responded to each and every half-halt and even the canters weren't too terrible. I was quite pleased with the ride overall and even happier with the score - a 64.231. Highlights included an 8.0 on our first centerline and a 7.0 on a canter/trot transition. SAY WHUT? That's right, if I ride well, we can do them well!

With the first test behind us with a respectable score, I relaxed enough to take a nap before our next ride, which was over two hours later. Y'all, this is the best part about having a camper at the show - you can eat when you want, nap when you want, whatever - it's like bringing your house with you. Plus, hubby was able to get some work done, so it wasn't a wash for him.

Paddy was really distracted in the warmup for the second test. Then suddenly, after a short walk break, he started feeling... funny. A bit off, even, but I couldn't pinpoint which leg it might be. He hadn't tripped or slipped, and the footing was very good. As we trotted around the outside of the arena, I almost decided to pull him up, but then he would be fine for a number of steps. I decided that I could always pull in the middle of the test if it got worse, but it continued to be intermittent. The turns were the worst, he felt so awkward, but I kept going. The trots were good, the left lead canter got strung out and leaning as usual - no surprise there. I was so focused on how he felt under me that I made an error in the test - tried to do a stretch trot circle where we were supposed to walk, but quickly fixed that. We made it down centerline and finished, but I was worried. Had I broken my poor horse? What had happened that he should suddenly feel so strange? I trotted him on a loose rein after but he seemed just fine. Nothing like a mystery lameness to end your day...

Saturday night we went out to drink all the margaritas dinner - LOVE the place right next to the showgrounds. So convenient, so delish. I managed to hold myself to one margarita, but I admit to having a cider when we got back to the camper. I figured I deserved it after that day!!! 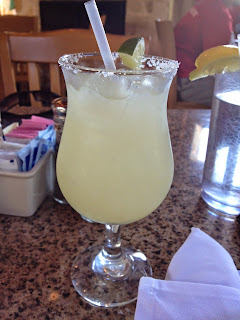 Sunday dawned cool and clear. After the usual morning chores, I had time to go watch rides for most of the morning. Y'all... wow. I watched one lady practically see-saw her horse's face off - and he PUT UP WITH IT! Paddy would have stuck his nose on his chest and left the arena. There were some very nice riders, of course, but there were also riders who I would not want to emulate. There were a couple of folks riding more advanced tests on what were clearly schoolmasters - what fun it must be ride a horse like that and learn what they were learning! Maybe someday I will have that opportunity. 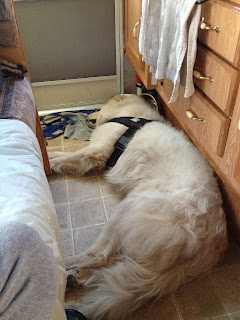 As you can see, Gus took his job as horse show dog very seriously.

I made the mistake of going to look at the scores before tacking up. Folks were BARELY squeaking 60s, and there were a lot of scores in the low to mid 50s. EEEK! Nothing like riding for a really tough judge! I tacked up, took a deep breath, and began to warm up my perfectly fine, 100% sound horse. Say what? We kept it short and simple - lots of walk, some trot, focused on obedient transitions, and one walk-canter-walk(ish) transition each way. I went in, determined to ride more forward than the day before, and stay relaxed. And damn if it didn't mostly work! Highlights included 8s on both centerlines (hooray!!!), lots of 7s on the trotwork, and 7s on the up AND down canter transitions. Now all we have to do is get the actual canter itself working and we'll be golden!

After another long wait, a nap, and some preliminary packing to go home, we tacked back up for our last test. It's hard to ride at 3:30 on a Sunday afternoon, lol! Another short and sweet warmup, where I mostly tried to get him moving up to my hand, because he was tired and wanted to suck back. And then, as we were trotting around the outside of the arena to go in... he went lame again. It is really, really hard to ride when you're worried about your horse, or getting called out by the judge for riding a lame horse. I felt like we struggled through the test a bit - he was pretty sucked back and behind the vertical, and I was trying to ride conservatively and not make the awful lame feeling worse. Miracuously, we got 8s on both centerlines again, AN EIGHT ON THE STRETCHY CIRCLE OMG, and 8 on the right lead canter tx (and a 7.5 on the left one), and most everything else was 6s. But can you imagine? An EIGHT on a stretchy circle! FROM MY HORSE!?

I jumped off of him as soon as I could and checked him over for damage. I couldn't see anything, and he seemed fine walking. I whispered to my husband that he felt off again, and he nodded back to me and said that he could see it again. What had happened? Neither of us had any idea, but we headed back to Paddy's stall to strip his tack. And as soon as we got there, he proceeded to pee.

And pee some more.

As we watched the stall flood, Hubby mentioned "You know, he did that yesterday too as soon as I got him to the stall after your second ride."

So apparently, my horse goes "lame" when he has to pee. Who knew? Now I just have to teach him to pee on command, BEFORE our rides.

And if you've made it this far in my blathering, here are the final scores:

Although my placings don't look very exciting, they combined the AAs, pros, and JR/YR for each class. So my 5th places were behind 4 pros, and the classes were won with an 80% (Dear pro rider, please move up to First Level and stop breaking the curve. KTHX.) And as it turns out, my scores on Sunday were good enough to land us the Adult Amateur High Point award!!!!!! I seriously cannot even believe it. To be fair, the competition at this show wasn't as stiff as at the last one, but still, I'll take what I can get! I am beyond stoked at this, and I'm hoping it comes with some fun satin!

I also got high enough scores to qualify for attending the Region 9 USDF Championship this fall, AND I got the scores I need for the USDF Training Level Rider Performance Award.  Ok, so it's not a score toward a Bronze medal, but in my mind it's a big step in that direction. Woohoo!

Maybe we can do this dressage thing after all. :) 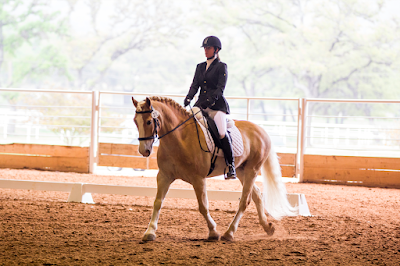 Pro pic from the last show, courtesy of Light & Time Photography (yes, I own it).