This weekend, we did an epic road trip to Columbus, Ohio, for an invitational joust at the Ohio State Fair. Despite the 21 hour one-way drive, we had a really fantastic time! The joust was great, the people were great, and the horses were amazing. We can't wait to do it again next year, and here's why...

#10: Shit happens, but it actually wasn't that bad

Somewhere in Oklahoma, we had a trailer tire delaminate while I was doing about 70. Let me just say it SUCKS to have a trailer tire blow out. But we were on a road with a wide shoulder, we'd topped off all the tires (including the spare!) before we'd left, and I'd double checked to make sure we had our "trailer aid" for jacking up a trailer (it's the yellow thing in the picture below). We managed to change the tire in about 15 minutes, then found a place about 40 minutes down the road that provided a whole new set of tires for us in under an hour. I mean, what are the chances of having a blowout on a weekday during business hours!?! We were back on the road quickly, all things considered. 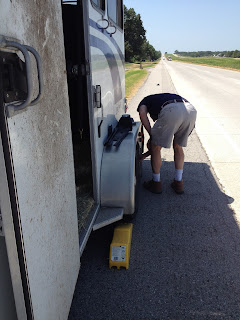 Changing the tire on the side of the road somewhere in Oklahoma. 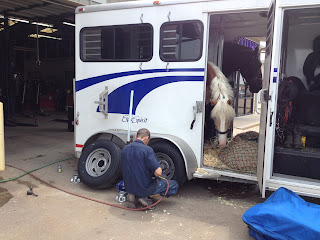 Paddy supervises the mechanic who replaced all the tires.

Side note: as we were driving through some town in Oklahoma, the gimmick that the car dealerships were using was "Free tornado shelter with every purchase!" Uhh... that's no so confidence-inspiring, especially with a big black cloud looming on the horizon!

Then, when we overnighted at a friend's, Brego failed to notice that there was a fence dividing two pastures. He tried to stop his headlong gallop, couldn't, then tried to jump the fence and only made it partway. He was completely fine except for one big scrape... on his right side, right where the girth goes. In other words, he was out for riding of any kind. But, as I pointed out to hubby, we'd brought TWO horses. Paddy was the "alternate" jousting horse for the weekend!

#9: Having people cheer for you is pretty damn awesome

Most jousts that we've attended have had fairly small audiences, but not this one. The arena we were in seated 7,000 spectators, and there were at least two jousts where the place was half full. It's pretty damn amazing to hear 3,500 people cheering for you (well, your husband anyway) when he gallops around the arena!!! 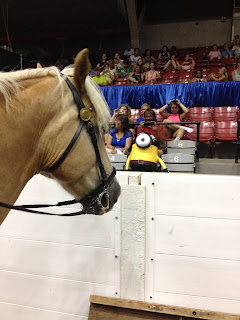 Also, there were minions. Paddy wanted one of his own. 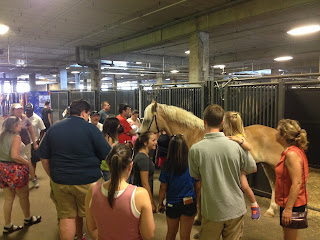 #8: The facilities were top-notch 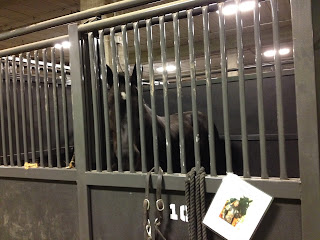 Brego says he would like extra carrots. Also some turnout. SO picky...


Oh and naturally we brought Lucia (the espresso machine) with us to the hotel. I had my chai and hubby had his latte. Never let it be said that we don't travel in style (or at least, with adequate caffeine)! 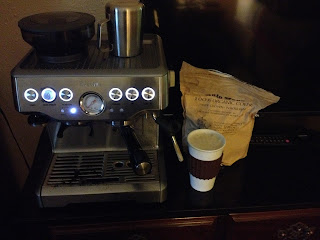 No, we do not have a problem. Stop judging already.

This is the first state fair I've been to as an adult, and it was really neat! There were dairy cows, beef cows, sheep, goats, little girls with their homemade pies, tractor exhibitions, displays on how wool is made... it was a pretty good glimpse into how the American heartland works. We very much enjoyed walking around and seeing everything! 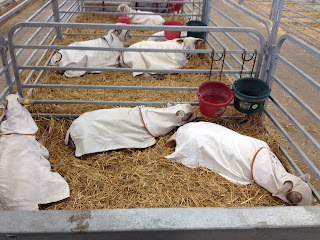 I've heard of a wolf in sheep's clothing but these are sheep in... sheep clothing? 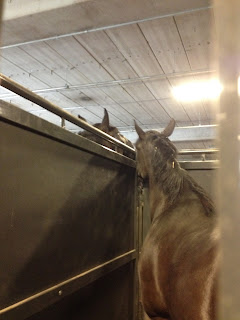 Brego's cousins, a Percheron draft team. For size comparison, they had no problems visiting over the stall walls. 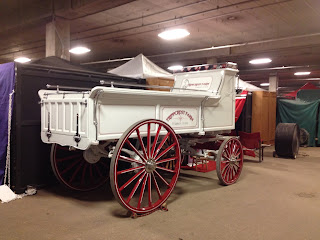 One of the carriages for the draft teams.

We took Brego and Paddy out to give them a bit of a bath, but mostly failed because the folks showing cows were bathing their cows in the same wash rack used by horses. OK first, I've never seen anyone bathe a cow, and second, neither had Brego. He was FASCINATED. The lady with the cow closest to us was like "This is Walker!" and Walker the Cow was all "Hi!" and Brego the Horse was all "OMGWTFNO." It took a few minutes and a good bit of snorting and staring, but Brego eventually got brave enough to introduce himself. 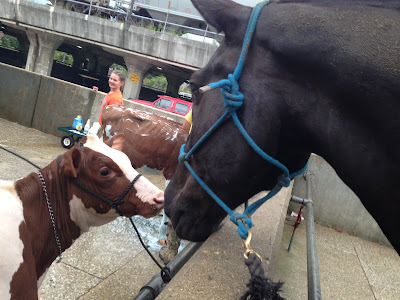 #5: Serving as mounted color guard was a huge honor

Actually, we were also able to participate in the swearing in of 17 new Army recruits, and we had some really amazing help from Army folks all weekend. It was an honor to be a (very small) part of it. 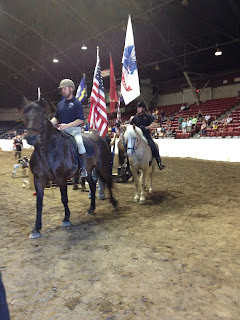 Hubby carrying a flag as part of the color guard.

#4: Paddy cantering in to "Suicide Blonde" was unforgettable

Literally, unforgettable. Because we had that song stuck our heads for the entire 21-hour drive home.


I may need to do a freestyle to this.

Tracy from Fly On Over and her husband came out Saturday afternoon - sadly, they didn't get to see the jousting but we did get to have dinner with them. What a treat! Tracy is so lovely, AND she has great restaurant recommendations, which were much appreciated by the starving jousters. Hopefully next time I'll have a bit more time to hang out, and maybe I'll get to meet Miles.

On Sunday afternoon, Amy and her daughters arrived, along with Sarah from My Red Mare. They were in time for the jousting, and then we got to spend a bit of time hanging out. Unfortunately the jousting schedule was really tight, so there wasn't much time to visit, but we managed to get a picture of the three of us: 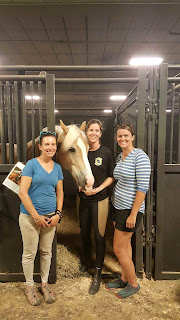 Sometimes you run into some pretty big egos in the horse world, but this event was AMAZING. Everyone was chivalrous, kind to the ground crew/squires, and overall excellent horsemen and women. It's not every day you get to spend the weekend with such a wonderful group of people! 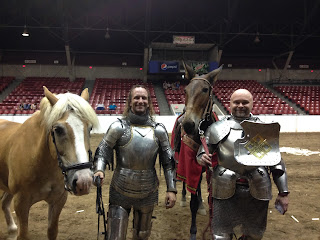 Hubby and a good friend of ours, who happens to ride a JOUSTING MULE. Gotta admit, the ears are kinda cute! 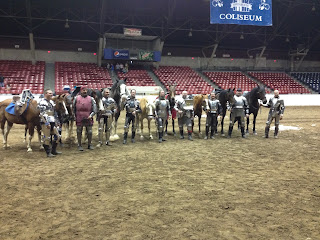 #1: Having the cutest horse there is pretty damn awesome

Ok, to be honest, there were a lot of REALLY nice, well-trained jousting horses there this weekend. However, IMO Paddy's the cutest. Whatever, I'm biased. 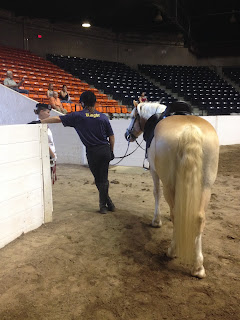 I also had the cutest knight, wearing a shirt that handily labels him as "knight". Convenient, no? 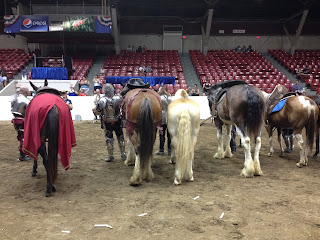 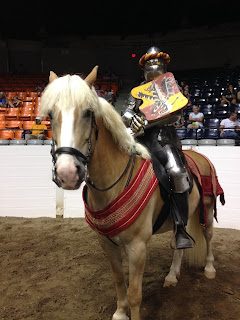 We really had such a wonderful time this weekend, the long drive was totally worth it. We're hoping to get to do it again next year!
Posted by jenj at 1:10 PM