For those of you not into detailed recaps of Training level dressage tests (which are almost as exciting to watch as paint drying or grass growing), here's the cliff notes version of what happened on Day 1:

If I want to do well in my first test, I have simply GOT to get to the show the night before and get a ride in. That was the original plan, but because of the additional 2 hours it took to drive, we got in much later than expected and there are no lights in any of the outdoor arenas, so riding was out. Unfortunately, Paddy's not an experienced enough horse to be able to go out into a crazy warmup the morning of the show and focus. Plus, he's not fit enough (and the footing was deeper than he's used to, so he got tired more quickly) to put in a long warmup, especially when he's putting in two rides per day. As a result, we didn't have enough time in the first warmup, so I wasn't able to really get him off my seat and especially off my right leg. Because he was so forward and distracted, I was hesitant to put my leg on and really demand that he work, which is what I should have done. Our test lacked focus and bend, and his haunches kept escaping me to the right. At one point it was so bad I remember thinking that we would have gotten good scores for the 2nd level test, where haunches in was a required movement. Oops! Oh, and I forgot my test. Again. Dammit.

Most of the judge's comments involved making better circles, him being a bit quick, and me needing to prepare him better. That's pretty obvious when you watch the ride:

For Training 3, I was determined to make the most of the warmup, actually RIDE this time, and get my circles the right shape. Oh, and not forget my test.  I was really pretty pleased with this test. The canter could be better, and I could have asked for more throughness in the trot, but overall, it was very steady and workmanlike. The judge's comments were mostly about quick tempo, showing more reach from behind, and more bend in turns. Paddy did start to suck back BTV more in this test, which is super hard for me to counteract. I made a mental note to kick him more up into the bridle the next day, because it gets worse the more tired he gets. 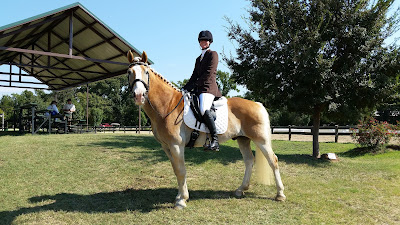 We stuck him on a hill for this picture so he'd look bigger. I'm not sure it worked. Also, WTF is up with my saddle pad?

Fuzzypony and I stuck around to watch the para riders (SUPER amazing, btw), and then we headed out for dinner. Would you believe we actually got decent sushi in Tyler, Texas? We called it an early night, since the unexpected heat had taken a lot out of both of us and the Haffie.
Posted by jenj at 9:27 PM