The title of this post is kind of misleading - the first two days of the show were (for me) just a standard USDF rated show. I rode T2 and T3 on Thursday, and just T3 on Friday because I didn't want to tire him out for the championship ride on Saturday.

Trainer arrive with her 2 horses and Paddy several hours before I did, but I managed to get in a solid ride on Wednesday before it got dark. The show grounds, at Great Southwest Equestrian Center in Houston, were full to the brim - it was by far the busiest show we've ever been to. Paddy did nothing but scream and do his best Haffie-giraffe impersonation for much of the time. Still, I managed to get him focused in our practice ride Wednesday evening and felt good about our scheduled rides.

I was very pleased with our first ride. I could have probably used a little more warmup, but overall felt pretty prepared. He was leaning on me a little and I was pulling on him some, but compared to our rides at Texas Horse Park, I did much better with staying out of his face. Our canters were pretty solid, and it just felt like a nice, workmanlike test. We scored a 64.6 and ended up first out of two (spoiler: only ribbon of the weekend). We even got 8s on the centerlines and I got an 8 on rider position. I was super stoked for a great start to the weekend! 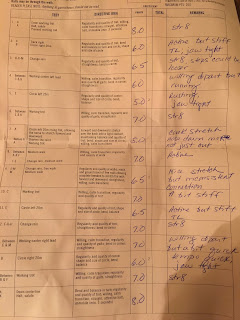 Now if I could just score higher on those coefficient movements...

We had several hours between tests, so I got something to eat and rested a little. I hadn't slept well the night before, so I as pretty tired as we were getting ready for the second test. Paddy seemed really tired too, and planted his feet when I went to pull him out of his stall. I remember turning to him and saying "Yeah, I'd rather be taking a nap too, but we have a test to do."

That's definitely not the attitude you should go into a test with. I was actually TOO relaxed and just sort of sat there during the test. I let him hang on me, I didn't really ride, and it totally showed in the overall quality of our ride. Oh, and did I mention I forgot the test... TWICE? Yep, twice in the same ride. I didn't go over the test before I rode, apparently because I wasn't focused enough to do so. So I completely blew it.


I'm pretty mad at myself for that test. It would have been a 61 and change if I hadn't made the errors, and the errors made it hard for me to get back on course and ride well for the rest of it, so our scores after the errors sucked. This test was also the one where he started accelerating out of the corners after the canter transitions, something I should have shut down right away - but hind sight is 20/20, right? Anyway, we ended up with a 58.4 for 7th place, out of 9. It was our worst score to date. 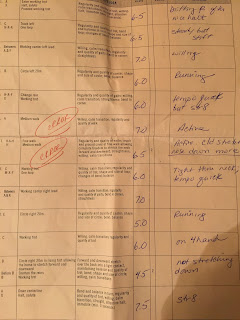 Basically I'm the biggest idiot ever.

I spent most of that night not sleeping well and going over T3 again and again to make sure I didn't make any errors the next day. I also did a little visualization to get myself psyched up for the test the too. The warmup was a little barge-y, but we did a lot of transitions and a lot of little shallow serpentines, which really helps get him moving off my seat and leg.

Unfortunately, what I did not bargain for is how spending almost 24 hours in a stall (minus three hand-walk sessions) would affect his energy level. We came blasting down centerline and it was kind of downhill from there. He was tense and quick, and positively bolted down the long sides in the canter. I helped the situation (haha) by hanging on his face, which of course is not the best answer. I was really, really disappointed with my riding, and spent quite a lot of the test telling him that I was gonna give him away to the next person who told me he was cute. Luckily, the judge was sitting in a car with the windows rolled up, so they didn't hear me (you're not allowed to make any noise, or you will receive an error).

The crazy thing? This was our high score test! We got a 66.8, the highest we've ever gotten at a rated show (naturally the paper copy of this test is MIA). I joked with my trainer that the judge must have watched another test, or the car windows were really tinted and he couldn't see.  I would have given us about a 61 or 62 for that test, so the scoring was generous. But the rest of the class was scored similarly, so we were 10th of 14. Still, that score gave us one qualifying score for the 2016 SWDC championship, and the score was high enough that it also counts as a qualifying score for the 2016 GAIC USDF championship. So that was a really positive thing in an otherwise disappointing test.

I ended up going back to the warmup arena and working Paddy for another 20 minutes after our debacle in the sandbox. I really pushed him to move forward and to canter around on a loose rein, and you know what? He was SUPER GOOD after that. Asking him for more forward really unlocked his back and engaged his hind end, and having him canter with basically no contact forced him to find his balance on his own, instead of leaning on me. We ended with several very good up and down canter transitions, plus some very good trot moments. What I took away from that was that I needed longer to warm up, and I really needed to push him for lots of forward without asking for round right away, just to get him moving and not leaning. So despite the poor performance in the arena, I felt really stoked about our new warmup plan for the championship ride the next day, and was confident that it would make a difference in our overall test.