Where did this fancy horse come from?

I had my first lessons back with my regular trainer this weekend. I'm afraid I talked her ear off about the clinic, and really just reaffirmed what Alfredo taught was exactly what she's been telling me forever, just louder and in a Spanish accent.

Taken together, we discussed what the clinic meant for future lessons. We agreed that:
On that note, we worked on 1-2 and 1-3, which I signed up to do at a rated show next weekend (this may have been a poor decision on my part). We had some SUPER nice work - still a lot of holes to fill in - but if I ride him well and set him up for the movements and let him do them, they're in there. 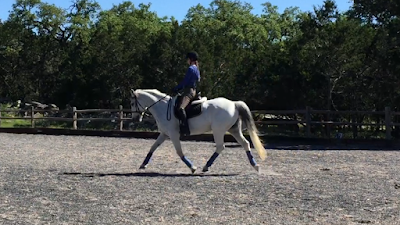 Look, suspension! I think this is a first for us.

We struggle a lot with lengthenings coming off the left rein - he falls out on the right shoulder/right rein, so we're not straight coming out of the corner, and then nothing happens. Literally, nothing - he just can't do it. So I really have to think straight (almost to being counterflexed) through the corner and then make sure I get him really really REALLY straight before asking - and then sometimes it works. But we're still getting the hang of it and I have to remember to set him up, which is hard. Prep work!

I'm also struggling to make the angles for the leg yields in 1-3. They're STEEP. We can do them, but I'm having trouble letting him move enough to make it happen. And sitting straight? Who needs to do that? 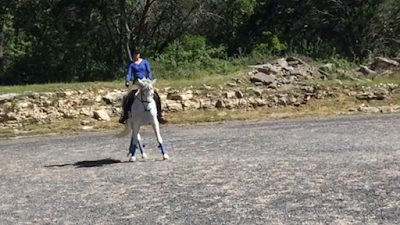 Obviously leaning waaaaaay to the right will help us go left more.

Here's one of our less terrible attempts:

There's also a change through the trot at X which also requires careful riding. I need to keep him very very straight and think UP for the downward so he doesn't go splat... and then not throw my body at him for the left lead canter. We'll probably get a comment that we took too many steps, but that's OK for now.

I'm excited for the show this weekend, but also wish we had another few weeks so I could be more prepared. Isn't that how it always goes, though?!
Posted by jenj at 9:49 AM