It's been a while since I've posted any confo shots of Taran, which is kind of a bummer because DAMN he looks amazing. I know, I say that every time... I keep thinking that he's done changing but apparently not!

Here's the last pic I posted, in April: 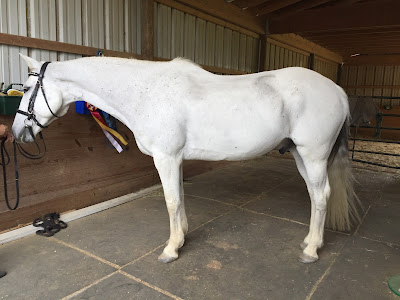 He looked pretty good in April, but the angle and the fact that he had his neck so arched helped hide a few flaws.

His May pic isn't as nice - he's standing with his head cocked toward the camera so his neck looks a little weird, but you can still see how his topline is getting stronger (especially right behind the saddle) and his butt is continuing to round out: 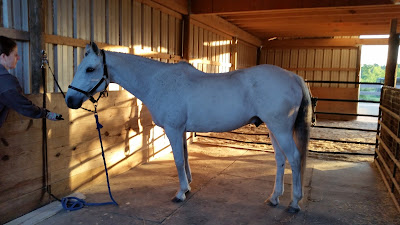 Unfortunately I missed out on a confo shot from June, but here's the July shot: 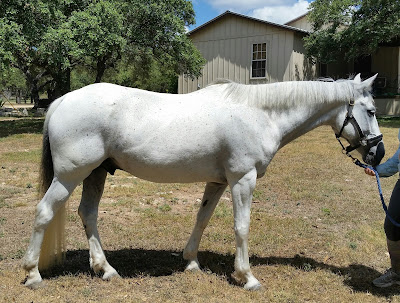 
I swear, he looks like he's gained 50 pounds of muscle! His topline is really starting to get stronger - that divot under his withers is filling in and so is the area right behind the saddle - and he just overall looks much bulkier. His neck is a little hard to see because of his mane, but that big under-neck muscle seems to have all but disappeared. 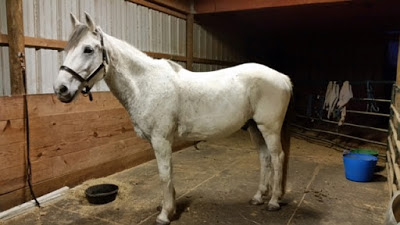 For comparison, here's what he looked like back in December.

I did end up changing his feed about a month ago. I'd switched him from TC Lite to TC Senior in May, but for whatever reason he didn't really seem to like the TC Senior (weirdo). So I switched him back to the Lite in mid-June, added a flake of alfalfa AM and PM, and started him on Platinum Performance. He's also been getting a lot of trainer rides in July, so that's helping him build strength and muscle too. Whatever's doing it, his body is still changing SO rapidly!

Anybody else got confo shots over time to share? If so, do a blog post! I love these progressions!
Posted by jenj at 8:04 AM