How a piece of bailing twine made my horse uphill (really!)

As a short-backed, short-necked drafty breed, Leo isn't exactly the most uphill creature on the planet. While he's not built downhill, he's also not a naturally uphill kind of guy. Plus, we've been working on stretching down and out and relaxing his underneck muscle, which sets him on his forehand. I also have an unfortunate habit of riding him a little (ok sometimes a lot) over-tempo, which also dumps him on his forehand. 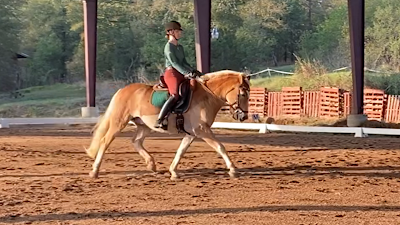 Definitely over-tempo and on his forehand here - the RH is about to leave the ground but the LF is still solidly weight-bearing. Oops.
So, how to get your horse off the forehand 101? For me that has always been lots of transitions, and usually it works well. But while the result is overall pleasant, it's not enough to make the 2nd level movements consistently easy or get his shoulders mobile enough for the fancy stuff at 3rd. Plus, it doesn't take much for me to get tense and pull a bit, and for him to dump down and not be able to recover without a major reset (think halt-reinback).
This is pleasant but it's kind of blah.
There are these nagging problems, like our change of direction in trot tends to be rushed for a few steps because we lose balance. Or the first full stride in the canter transition is huge because we've lost balance. Or I let him get behind my leg and he loses balance. Etc etc etc.
Enter the lowly piece of bailing twine: 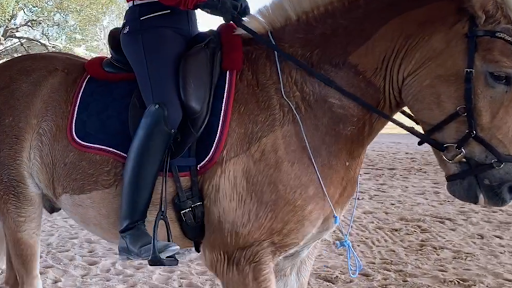 You too can have one of these super fancy training gadgets!
I swear you guys, this thing is MAGIC. I held it between my middle and index fingers with minimal tension around his neck, and right away I could feel his chest push down and out. Obviously I could see it too, since his poll drops, and I could feel it in my seat as well, but the feeling of the chest going down and out was really something new. All I needed to do was raise my hands up (straight up, not back) an inch or so, and that reminded him to lift his chest back up. It also helped me sit a bit deeper in the saddle in that moment, essentially half-halting with my seat, further encouraging his chest up and his pelvis under. All that without touching his face!
The first day of the clinic, I used it quite a lot. The second day, Leo came out MUCH lighter in the front with very little help from the twine. My job was to rebalance him every.single.time he got a bit heavy in front - no more "oops" and don't fix it moments. I got much better and faster at helping him, and relied on the twine less and less. By the third day, he was a bit tired but he felt SO much more balanced - more engaged behind and up in front. Moving his shoulders around felt effortless, and I finally got my legs situated so I could control his hind end better (that's for another post though).
Here are videos of trot and canter each day, for comparison:
Trot progression
Canter progression
Hopefully you can see (and hear) when he gets down in front and when he feels more balanced. I think he was best on the second day, but there is a lot to like about the third day as well.
I plan to continue to ride with the twine to help with feel and balance, although I will likely just start our rides holding it and then let it lay on his neck. It has really been a great teaching tool, allowing me to feel the "chest down" sensation in a whole new way. I need to be 100% committed to NOT allowing him to get his shoulders down, EVER. That also means that *I* cannot get my shoulders forward or look down, because it affects his balance so much. But the feeling when he is truly balanced and uphill is just so incredible and easy, I can't wait until that is our new normal! 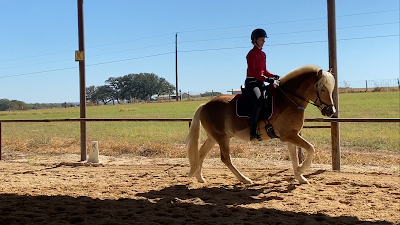