After not attending a rated show since I got my bronze medal on Taran in 2018, 2021 has been the year of second level. Leo and I actually started showing 2nd at schooling shows last year, but I wanted to get back into the rated scene this year - and boy did we!

Our first outing was in April at a venue about 30 minutes away. Luckily, they hosted a schooling show the weekend before, so we were able to practice. Leo struggles with new places, and rated shows cause me so much anxiety, so being able to practice at a venue ahead of time is really helpful for both of us.

I really shouldn't have worried, because Leo came out ready to show off. We put in nearly flawless tests all weekend and our scores just kept getting better and better. On Saturday, 2-1 earned a 66.757, which I was beyond pleased with since it was an even better score than at the schooling show the week before. Then I went in and rode the pants off of 2-3 for a 67.619.

I talked to Jan Saturday after my rides and we went over the tests, and she texted me "You know, you can get a 70 at second on this horse." So that was my goal for Sunday - ride everything as big as I could, and really push the envelope. We walked out with 69.054 on 2-1 and a 69.405 on 2-3!!! We would have scored a 70 except I didn't use enough leg on the downward medium/collected canter transition so he broke. SO CLOSE! It was an incredibly successful weekend, as won all our classes, qualified for regionals, and we were champion AA both days. PONY POWER!

OMG MOM THIS IS SO DUMB

Our second time out was rather less successful. I put a lot of pressure on myself because we'd done so well, and because I was showing with/against friends. The brain weasels are really my own worst enemy, I swear.

We started off with a rather mediocre ride on 2-3 - I just felt stiff and he didn't feel really with me. We had a mistake on the counter-canter serpentine too, which is generally a strong movement for us. We scored a relatively poor 63.452 for a fourth place, nothing like our nearly 70s score just a few weeks before. Part of it was that I'd spent most of our time working on our freestyle, but the pressure I'd put on us didn't help.

At lunchtime, we went to ride our freestyle... and he absolutely lost his shit when the music came on. He bolted multiple times in the warmup and threw in a few fun moves with his front feet off the ground. Other horses lost their marbles too, including a very seasoned PSG horse, so we weren't alone, but it was definitely not the warmup we wanted. In hindsight, I should have just told him it was OK and moved on, but I didn't ride him confidently enough and he really needs that from me. When we got in the arena, I not only had to deal with my poor flustered horse, but I couldn't hear the music. It was so bad the judge stopped us just after our halt, and by then Leo was such a mess he was rearing directly in front of the judge's stand. I decided that excusing ourselves was probably our best option, and the judge kindly agreed.

0% recommend being that rider on that horse

Sunday, I came back with a plan. I borrowed a noise-cancelling bonnet, and I went to the warmup and RODE. We had a very lovely 2-3, probably one of the best ones I've ridden, but the judge didn't agree. Even my coach said our test was better than our score reflected (62.976), so ya know... some judges just don't love some horses, and that's ok. I know not to ride for those folks if I can avoid it. We had a few bobbles in our freestyle warmup reminiscent of the previous day, but I rode him through it and we put in a good show. It wasn't the test I wanted to ride, but we got it done and it was mostly to the music. We got both a freestyle qualifying score and a score toward my bronze freestyle bar (68.467), so mission accomplished there.

Our last show was in early August, which I normally try to avoid because it's hot AF here in August, but luckily the venue had a lovely covered arena and my ride times were at 8 am. Perfect! Since we'd never been to this venue before, I took a few lessons with the resident trainer so I could let him see everything, and it really paid off. On the day of the show, he was relaxed and workmanlike, a far cry from the first time I brought him there, where he was quite looky and distracted. I keep forgetting that despite being a reasonably competent second level horse, he hasn't traveled much, and I need to do a better job of getting him out into the world. 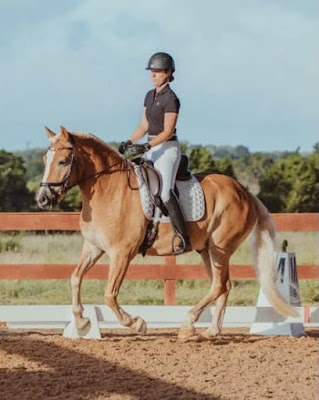 I had to time my warmup carefully, since I had back-to-back rides and the warmup arena was a bit deep and tiring. 2-1 was clean but I felt super stiff for all of the trot work, then I got it together for the canter work. Overall it was a nice test but I didn't feel great about it; still it was our high score for the weekend (68.514 and reserve AA score for the day). I took him back to the warmup arena and just touched on what we needed for 2-3 (TOH, simple changes), and then put in what I thought was a much better test, but it only scored a 66.429. Still, both tests were good enough for 1st place and the 2-1 score got us reserve AA champion for the day. 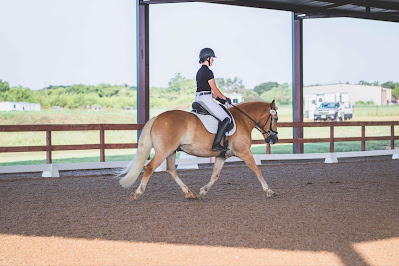 Day two went similarly well - 67.432 for 2-1 and a 64.405 for 2-3, and another reserve champion. Despite the good scores, he felt stiff in his neck and body, and he wasn't really in self-carriage as I wasn't riding particularly well. Even so, we got one of the cutest comments from a judge ever: "You got every ounce out of him!" If only she knew how much is still in the tank! 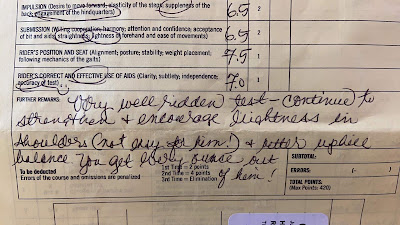 On the USDF side, Leo is currently in first place for the 2nd level AA Haflinger all-breeds award, and in 9th place for USDF 2nd level AA. He's also eligible for NDPC awards, but we're still trying to get him correctly measured.

I know lots of folks don't love second level, but it's been fun and I actually really enjoy it (even if 2-3 is a damn marathon). I think this pic pretty much sums it up: All smiles! 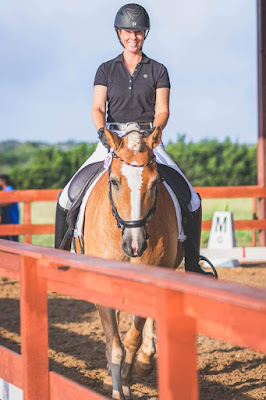