Well, we did the joint lavage on Thursday afternoon. Friday Saga was only a bit better, but analysis of the synovial fluid showed the white blood cell count within normal limits. The hope was that we'd gotten the infection is just one lavage, so Saga came home to convalesce in his stall.

Honestly, when I picked him up he was not noticeably better. This morning when I took him out to graze for a bit (about 10 feet from his stall), he looked pretty bad. 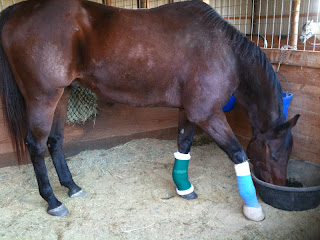 This is how he stands most of the time - right foot out, with no weight on it.

This evening after dinner he looked even worse. The only way for him to be any MORE lame would be if he was 100% NWB on that foot - and that would make him a 5/5 lame.


It's horrible to watch, isn't it?

I called my vet, but at this point, there aren't many options. We are going to check the joint fluid again in the morning to make sure the infection isn't back. In the meantime, we've made a splint (per the vet's instructions) out of PVC pipe and duct tape, to immobilize the joint. Even immediately after we put it on, it seemed to help him a little. So that's something, I guess. 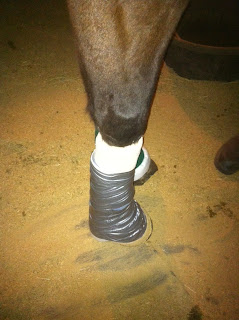 Slightly redneck splint, but it seems to be working.

I am not going to let my horse limp around like this for very long. Every day he's essentially non-weight-bearing on that foot, the risk of compromising the supporting foot increases. I'm keeping him in standing wraps, and checking him several times a day for signs of laminitis, but he could also bow a tendon or something. Not good. He's still perky and eating, but he is clearly in a lot of pain and it's not getting better.

At this point I'm trying to prepare myself for the possibility that this is not going to have a happy ending. Have I mentioned lately how much horse ownership sucks?
Posted by jenj at 10:26 PM