Confession time: in between worrying about Saga, I've been thinking about what I really want in my next horse. Here's my list so far:
I know, I don't want much! I've been perusing options online, but y'all, the choices are not exciting for the amount of money I have to spend. There are a ton of off-the-track TBs and QHs around here, but most of them are broken in some way. Also, I am not sure I want an ex-racehorse - I rode quite a few of them when I was looking for Saga, and I felt like I was sitting on a stick of dynamite. I'm closer to 40 than I care to admit, and I know I am mortal and can get hurt doing the crazy stuff I do with horses. I need a horse I am confident with, which was one of the reasons I liked Saga so much.

Ok, ok, so on to the important stuff. This is Tucker. He's a 15.2 hh 5 YO TBx (I'm not going to say what the X is just yet, but you are free to guess). Both parents are registered, but he is not registerable with any of the "normal" registries. 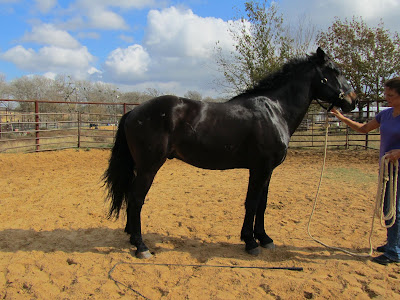 Here's what I like: short back, sturdy legs, short pasterns and cannons, lots of power in back, uphill build. 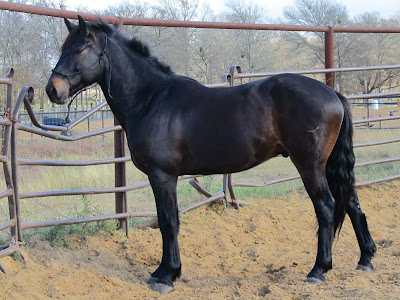 Here's what I don't like: short neck that's currently muscled upside-down (fixable), not the most refined head, upright shoulder.

Here's a video of him trotting a bit, and jumping. This was his first jump EVER - it was about 2'. I like that he didn't even take a peek at it, and he gave it a good effort (as opposed to plowing through it, like Oberon does).

Here's his canter. I like how balanced he is, and how easily he flows.

I have a lot more video of him, but suffice it to say that he's a decent mover. He's stiff and less respectful if you work off his right side. He leads well but is a little in your lap. He HATES being tied and left alone (paws constantly, but is happy to go to work as soon as you untie him and ask him to move off). He needs work on simple stuff like picking up his feet and trailering. And here's the big kicker: he's not been backed. In fact, he's barely been handled since he was a yearling, and has been out in a pasture with 17 other horses since then. However, after his third longe session (which I did, although that's not me in the videos), we sacked him out with a saddle pad (that took 3 minutes) and put a surcingle on him (which took 5 minutes). He was fine with both and then went on to longe again, no bucking, scooting, or anything. He seems to have a good brain and none of the "baby" issues one might expect from a horse with very little handling, so I think that he could be backed within a few weeks.

If I were to get him, I would leave him with a trainer I trust (the one in the video) for 60 days to get the initial work done, including working on tying and trailering. She has already backed Tucker's brother, and I really love what she did with him. In 60 days he has gone from being pretty much just like Tucker to being a solid, respectful citizen, and I have no doubt that Tucker would turn out similarly. As for why I am not looking at the brother, he's currently injured, RF, and it's too much like Saga's injuries for me to even consider him.

So, am I crazy to even consider an unbacked 5 year old? And how much would YOU pay for a horse like this?
Posted by jenj at 9:49 AM