About that dressage show...

So remember the dressage show I'd hinted about signing us up for? Well, it was last weekend (yes, I’m that far behind)…

I’d signed us up to do Intro A and B (walk-trot) at a local schooling dressage show. My goal was to stay in the arena and stay on my horse, anything else was a bonus.

It’s kind of strange to me going to a show just to get miles. When I showed Cash, we were prepared, schooling above the level we were showing at. We were on a mission. I knew we could go out and kick ass and take names. My goal was always to put in the best performance we could on that day, and I have to say I was never disappointed. With Saga it was the same – I knew we were ready, and we were out there to conquer. Even when I showed Red this spring in the horse trials, and I knew we would have a hard time in dressage, I also was confident that we’d eat up the stadium and XC course and have a great time – and we did. But with Echo, my goal was literally to stay on. I had no idea how he’d behave, or what he’d do. It was all uncharted territory.

I had signed up for a stall, and decided to haul out Friday night and leave Echo overnight (oh the horrors, poor Baby Racehorse). Our rides were at 8:14 and 8:32 (have I mentioned how much I love knowing exactly when I’m going to ride?) so I figured staying overnight would not be a bad thing for him. I arrived around 7 pm, got Echo settled, then tacked up for a ride. We did a short longe in their round pen, and then I got on to ride. We spent about an hour, mostly walking, in both the warmup arena and the show arena. It was quiet, and I was the only one riding, which was really nice. Echo was very looky but not spooky. The mirrors in the warmup were not interesting, nor was the judge’s stand, although he did have one moment where some sand hit one of the dressage letters and made a funny sound. Oh well.

The next morning, I repeated our warmup – a short stint in the round pen, followed by almost an hour of walk warmup. Every horse needs a different warmup, and I’m still trying to figure Echo out. Lots and lots of walk seems to work well for him right now – he can look around, we can work on circles and bending and getting his brain into work/focus mode, and he gets a chance to relax.

There were two other horses in the warm-up arena with us, which I was really grateful for. Echo threw in some pretty good spooks. He spooked when the judge stood up in the booth – which was in the arena NEXT TO the warmup. He spooked at the Intermediare horse doing tempi changes (insert eye roll here). He spooked when the baby horse in a nearby paddock stood up. He spooked when he saw another horse (not him) in the mirrors. These were good spooks too – he skittered halfway across the arena, sideways, at the horse doing the tempis. Yes, I was *that woman* on *that horse*. Awesome way to make a reputation at shows. NOT.

Eventually he started to relax and listen to me. We worked on engaging his hindquarters, following my hand, and keeping a steady rhythm. I tossed in some halts here and there to keep his attention, which was still (constantly) wandering. He threw in a few more random spooks, but I stuck with him no problem and we moved on. We didn’t do a whole lot of trot work, just enough to get going, and we had some nice moments. Then, the lady on the I-1 horse did her freestyle (it was awesome) and of course everyone got distracted watching that – including me and Echo. One more ride (and some more attempts at halts) and it was our turn.

Our first test was decidedly meh. We did all the figures in the right places, and all the transitions, but I was riding VERY conservatively. Echo was looky and distracted, so I was just trying for straight lines and circle-like shapes. He mostly listened to me (in his distracted way), and did not spook at the judge’s stand or anything else while we were in the arena. So although we only scored a 55% and change, I had a huge grin on my face coming out of the arena.

We had one ride to go until our next ride, and Fuzzypony held Echo while I took a few sips of water. I relaxed a little in the saddle, and decided that in our second ride, I’d actually try to ask more of him. I did a bit of trot in the arena while waiting for the bell to ring, and he actually came round for me for a few steps here and there, and we had a little bit of bend. The test itself went much better, although in places I was concentrating so hard on riding straight and not having him fall to the inside that I got us buried in the corners, oops. It wasn’t a stellar test by any means, but it definitely had some promising moments, much more so than the first test. We scored a 59% and change on that, and I was very pleased to have improved that much between the two rides.

The judge’s comments were as expected – we need more bend and relaxation, and I need to ride better. Real shocker there, lol!

Here are some stills from the test, courtesy of MC. Yes, Echo had his very own cheering section!

Our trot looked mostly like this - above the bridle, with me riding him back-to-front in an attempt to keep a slow, steady rhythm. Oh, and him with his mouth hanging open - he does not approve of me asking for him to give to a half-halt. Work in progress. 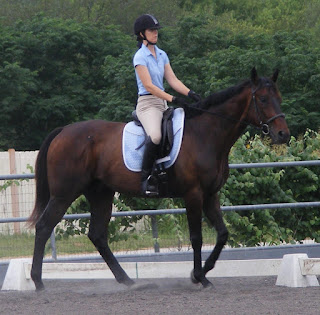 Walking. We did a lot of this. I'm kind of amazed that the judge manages to stay awake during the intro tests!

Not sure if you can see the huge grin on my face. :)

Must have a smoochy picture.

I wish we were further along in our training and could have put in better tests, but we are where we are and I keep reminding myself that this is for the experience, not the scores or the ribbons. And as experiences go, it was GREAT! Overall he was a very good boy, and I know what we have to work on.

I have video of both tests, which I will post for a good laugh. That way, in a year from now I'll be able to look back and remember how far we've come!