Attack of the fire ants

We've been very lucky this year to have a relatively wet, cool spring in this part of the world. I say "relatively," because just two years ago, by this time we'd already had 10 days over 100 degrees and hadn't seen a drop of rain for over six months. When you're comparing to that sort of drought, highs in the mid-90s, with a weekly or bi-weekly rain, seems quite mild.

While rain is wonderful for our pastures and trees, and I won't complain about a drop of it, it has the unfortunate side effect of bringing the fire ants up to the surface. If you live in a part of the world with no fire ants, count your blessings. They are truly nasty creatures that were imported into the US in the 1930s and have been spreading since. They take over everything, decimating the local population of insects and stinging en masse anything that disturbs their nests. Stings are initially painful and then incredibly itchy. Put it this way - I won't go outside without boots on right now, and I always look where I put my feet.

Unfortunately, poor Echo wasn't as lucky. The boys were turned out in one of the front pastures the other evening, and Echo decided to roll. I watched him do it, and then shortly after noticed him rearing up and double-barrel kicking the air, repeatedly. Our neighbor was riding down the street on his horse at the time, so I thought that perhaps Echo was feeling a bit frisky with the neighbor horse in close proximity. Still, it was odd behavior. Then at night check, I noticed that Echo was behaving really strangely. He and Cash usually come in and share a beet pulp snack while I take off their fly gear and check them over. Echo was interested in the BP, but he'd take a bite, walk around in an agitated manner, sniff the ground, pester Cash, and swish his tail madly. I thought he might be colicking, but he was eating and not rolling. I finally ended up putting Cash in the stall to eat his share of the BP in peace, Echo was pestering him so much!

I watched Echo for a few more minutes, pacing constantly, all but wringing his tail, trying to figure it out. Finally he came over to me and put his head in my arms, and as I rubbed his face I noticed how the barn lights were shining against his gleaming, dappled coat... with the HUNDREDS OF WELTS ALL OVER HIS SIDE. I realized immediately that he must have rolled in fire ants, and the antics before were desperate attempts to get them off. Poor guy! I ended up calling my vet to consult about what I could give him to reduce the pain and swelling, since he was so miserable. Turns out that a nice cold hosing, along with 30 mg of Dex, was just the thing, and luckily I have plenty of that on hand for Cash. I stuffed the Dex pills in some carrots (since he was too agitated to eat anything that wasn't hand-fed) and he gobbled them up. Fortunately, by this morning, the welts were gone and Echo seems to be back to normal.

In the meantime, I purchased four containers of fire ant poison and have so far treated over 250 mounds, most of them very small. We had been using the "environmentally friendly" version, but eff that shit. I want those little bastards DEAD, immediately if not sooner. 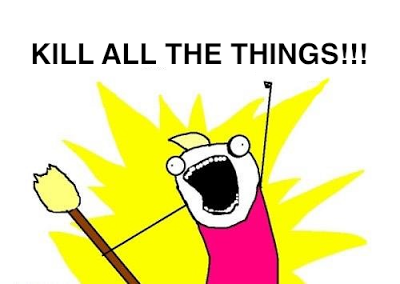 Especially the fire ants!
Posted by jenj at 9:27 PM