As I mentioned last week, Paddy came up lame on Tuesday the 21st. We’d had a great workout on Monday, then he spent Monday evening carting around a Western saddle for 3 hours for the video shoot. When I went to ride him Tuesday, he was definitely short on the right hind. I didn’t find any heat or swelling anywhere, no scrapes or cuts, and his feet looked fine. He wasn’t broken-legged abscess lame, just looked very uncomfortable across his hips. My first thought was that the Western saddle had tweaked something, so I gave him some bute and stuffed him in a stall overnight.

Wednesday he wasn’t any better, nor did he seem improved by Thursday. That’s about the limit for me seeing my horse in pain, so I made an appointment with the vet, sadly cancelled our rides for the dressage show, and  went through all the “what ifs” in my head. Let’s be honest – we are just now really coming back strong from the soft tissue injury earlier this year, and the thought of going through rehab again was pretty crushing.

Unfortunately we had to wait until Tuesday to see my favorite vet. In the meantime, I had a massage therapist out (something I’d been meaning to do anyway), and she found that he was very tight all over, except for the saddle area. Well, at least the saddle fits him? It was super interesting to see how he reacted to the massage – on the entire left side of his neck, he was tense and cranky. He even kicked a few times, which is something he NEVER does. The right side of his neck apparently felt better, since he took a nap while she did that. He was clearly sore over his hips and did a lot of face-rubbing as a release. There was very little yawning or licking, but the therapist said that wasn’t uncommon, he just wasn’t sure what to do with everything and the kicking and face-rubbing was his way of expressing himself. It’s funny how individual they all are! 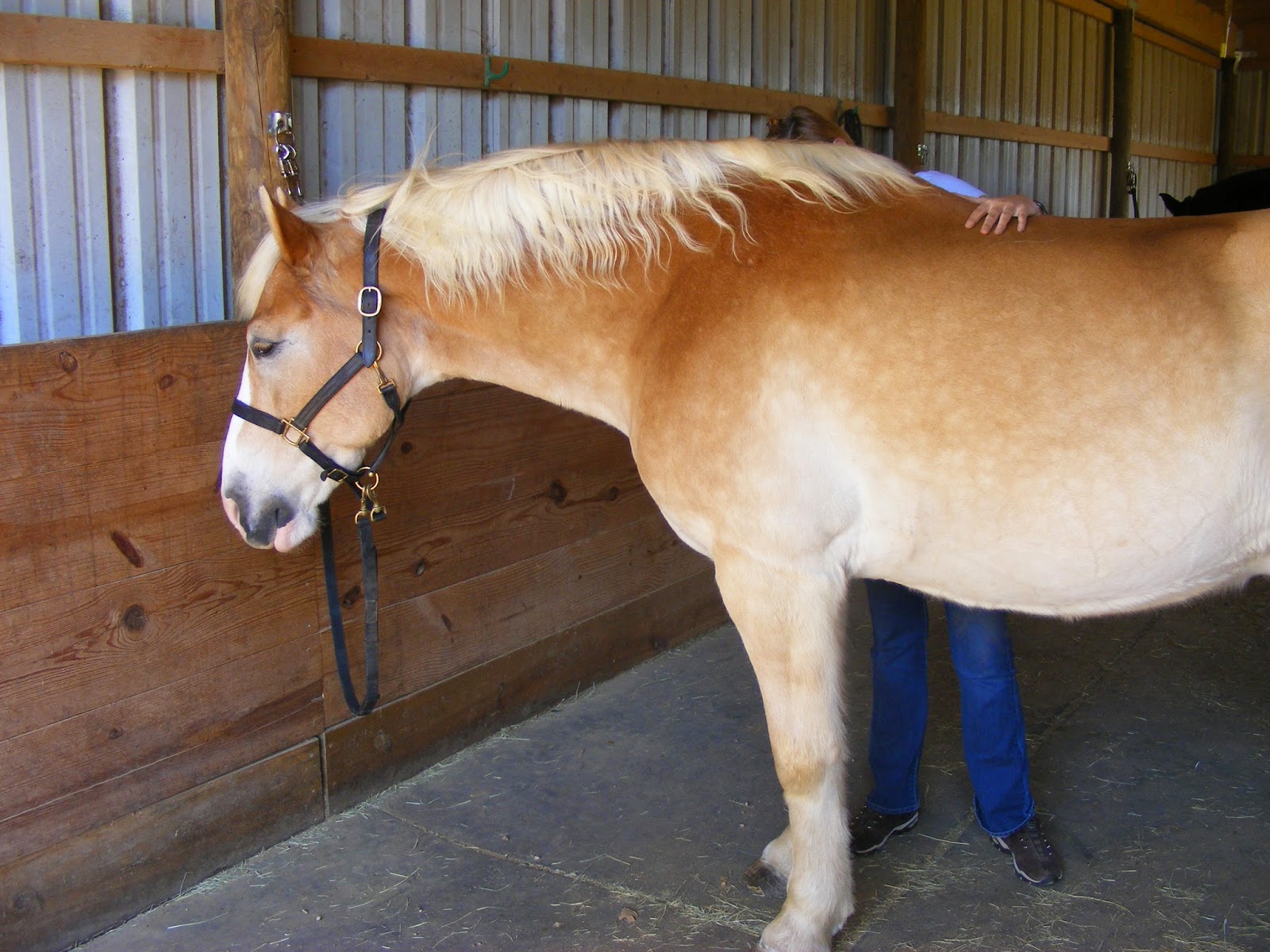 After the massage, he apparently felt good enough to “spook” at a chicken and gallop around during his quiet turnout time (up to then he had been content to walk around and graze). By the time the vet saw him on Tuesday, he was markedly better, but still not 100%. She immediately pinpointed that he was sore on BOTH hind legs, the right moreso than the left. They did a thorough lameness exam, including flexions. He flexed very mildly positive on both hocks, and also on his right stifle. However, the vet felt that since there was no fluid or swelling on the stifle, and since he was getting better, that the stifle issue was more likely to be muscular than a joint issue. The hocks concerned her way more. 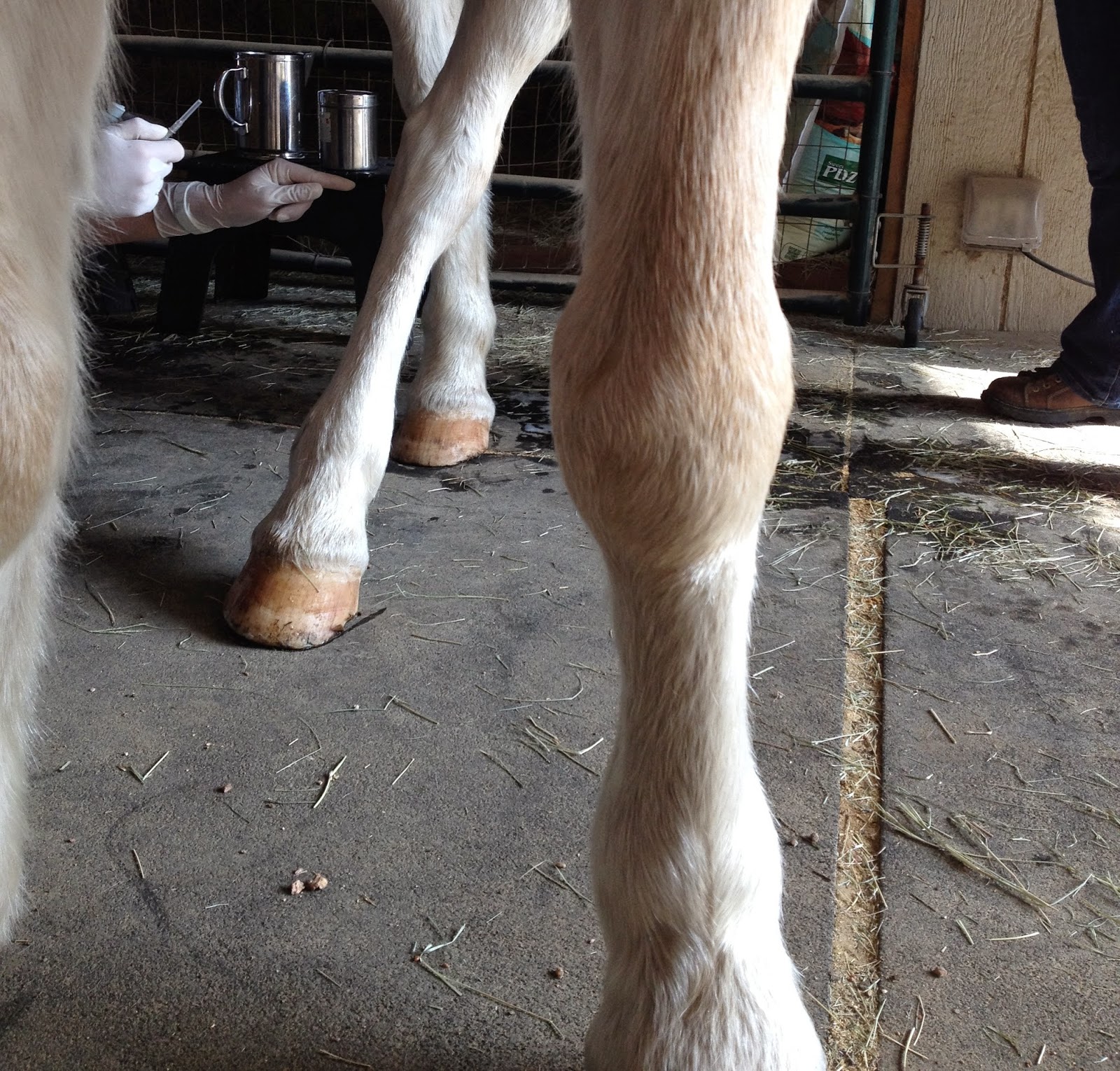 Drunk Haffie is a cheap date

So yes, I injected both hocks. I know some of you won’t agree with that decision, but I’ve been down this road with several horses and I am comfortable with it. I am also starting him on loading doses of both Legend and Adequan, in hopes that those will help his joints even more. I’ve tried (very expensive) feed-through joint options in the past, and really haven’t had much luck with them – but I’m sure everyone’s mileage varies on that. This is my vet’s recommendation for his best chance for long-term joint health, with the goal being very few actual joint injections and maximum joint support with other options. 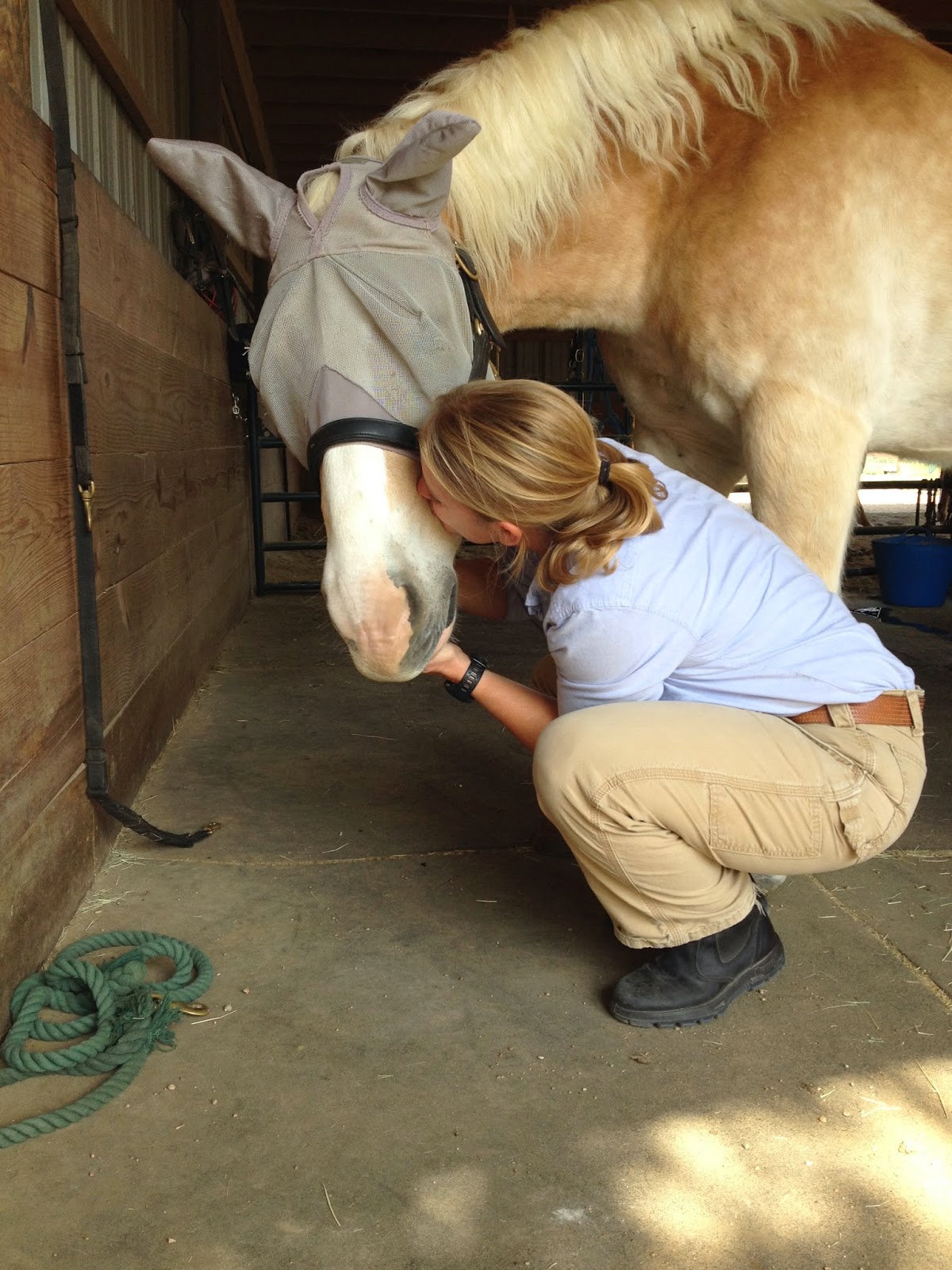 I lurve my vet 'cause she lurves my horses.

The best news is that we had a light ride on Saturday and then a full ride on Sunday, and he was AWESOME! His stifle didn’t seem to bother him at all, so I think the vet’s assessment that it was a muscle problem (possibly caused by wearing the Western saddle) was probably accurate. We’ve got another visit from the massage therapist this Thursday, and I’ve got stretches to work on before each ride to help him stay limber. I’m also considering a BoT sheet for him to wear before rides… anybody (Lysette, I’m looking at you!) use those, and have any recommendations?

I’m totally relieved to have my horse back, and I’m glad for this little wake-up call that my Paddington needs a little more maintenance to help him be his best. I’m more than prepared to make sure he gets whatever he needs!