Back in March, I attended my first ever clinic with Alfredo Hernandez. I learned a TON - apparently being yelled at in a heavy Spanish accent does wonders - and Taran had some amazingly fancy moments. We also struggled with basic things, like I couldn't sit the trot for more than a circle because Taran just couldn't carry me. We've come a long way since then, and I've been eager to ride with Alfredo again.

Don't get me wrong, I love my regular trainer. She's got the attention to detail and is absolutely unwilling to cut corners, which is what makes her so good. However, attending a clinic with the right person can result in a really great leap forward in your riding. The clinician doesn't know (or really care) about your baggage and how your dear little grey pony doesn't like to carry his weight on his right shoulder and falls in with his haunches right and sometimes the canter transitions suck and blah blah blah, they just see the problem and want you to fix it NOW. For whatever reason, that kind of no-nonsense attitude really works for me and pushes me to the next level.

This time, I told Alfredo that we'd finished out the season strongly at first level and were looking to move up. I wanted to work on better engagement, connection, collection, and all those things. We got right to work and he got on my case about Taran being too much on the muscle under his neck. As he puts it, he wants the horse "deep and round". Watching the videos, this has Taran somewhat BTV at times, which I don't like, but I see his point because at that moment he's actually relaxed and giving on the underside of his neck. 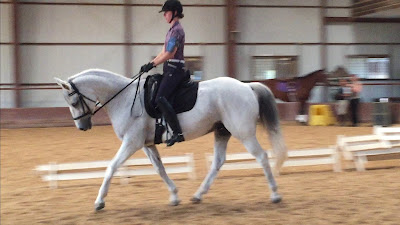 
Oh and I got nailed on keeping my hands together and down and my elbows at my sides. At one point Alfredo actually took a hair tie from a lady who was watching and stuck my thumbs together with it. Suddenly Taran started going great and Alfredo was like "Look, see, I fixed your horse for you!" So uh, yeah. Hands are a problem.

We worked a lot on haunches out on the circle, especially to the right. T likes to not take weight on his right shoulder and he sort of tends to curl around it sometimes, and the right hind doesn't work very hard either. Pushing his haunches out a little made that RH actually come in line with the RF (instead of falling to the inside), and as a result T was straighter and more even in the reins. Note to self. Oh and also when we canter to the right I need more inside leg (I mean duh, I know this, but no really, MORE INSIDE LEG). 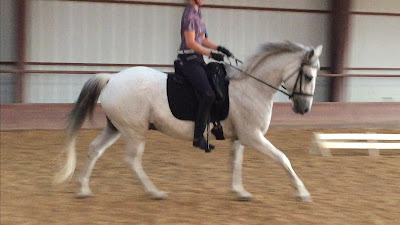 This is not enough inside leg.


Annnd then we tried this crazy exercise where we did renvers on the circle at a trot, then transition to walk (in renvers), then a turn on the forehand (in renvers), then walk (in renvers), then transition to trot (in renvers). It's funny going into an exercise where you have no idea how to do it... we were in renvers and he asked for a turn on the forehand and my brain took about 5 seconds to figure out how to do it. We did OK tracking right, but tracking left was just a huge nope that involved head flinging, throwing his haunches left despite me pony-club kicking with my left leg, and running backwards (side note: maybe he'll be able to rein back after this weekend?). 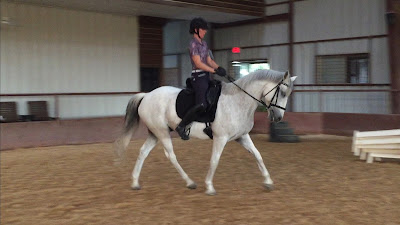 Renvers on a circle. Sort of. 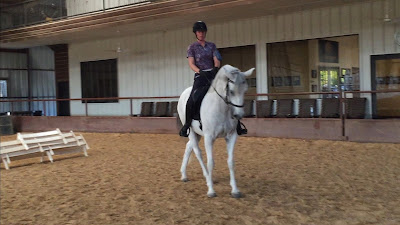 Turn on the forehand in renvers (ignore the lack of bend, this is haaaard)

Alfredo ended up asking him to move from the ground, and we got this absolutely amazing trot as a result: 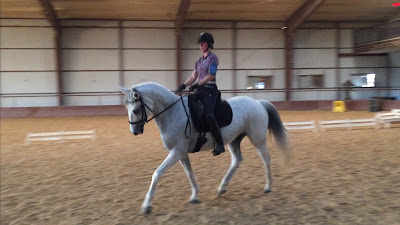 This horse is so fancy and uphill, where did he come from? And more importantly, how do we get more of this?


At the end of the session, Alfredo had us work on piaffe for a little bit (and by "us" I mean that I sat there like a lump while Alfredo did all the cueing). We were tracking left and T was still in his throwing-haunches-left mode, but Alfredo is a patient guy with an excellent sense of timing and we managed to have some nice moments. 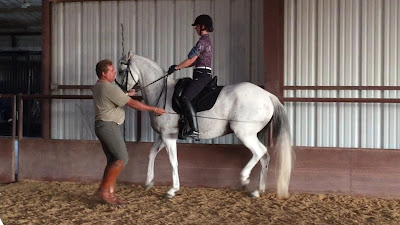 
Not that Taran is ever going to be a piaffeing machine or anything, but at least it felt really cool and got his haunches super activated. I am SO looking forward to my next two rides!
Posted by jenj at 8:44 AM