This year we qualified for both SWDC and GAIG at Training and First level, so I rode a total of four tests, two each on Saturday and Sunday. I also rode a "warm-up" 1-3 test on Friday in the normal USDF rated show, to attempt to get my nerves under control. It sort of worked.

We totally rocked the warmup (even without my trainer, who was dealing with a sick kid), but when we got in the arena, Taran was distracted and looky. Our trot work, which has been stellar all year, just fell apart. Our canter work was much, much better, until I started to get light-headed. There was a moment in the second canter lengthening where most of the world went black (tunnel vision FTW), so needless to say that canter work was not our best. I did stay conscious for the entire test, but it took me almost an hour after I got off to return to a "normal" not-beet-red color. The only thing I can figure is that between the heat (97 degrees plus humidity) and the nerves, I got overheated. I thought I was more fit than that, but apparently not. 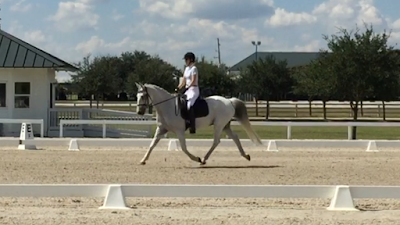 Our trot lengthenings are getting way better though... at least until we lose balance and fall apart.

Saturday was our first day of championship rides. First up was the GAIG 1-3 test. Luckily it was much cooler, so I wasn't as worried about overheating. HOWEVER, you are not allowed to use a whip in the GAIG tests, which Taran realized right after the first trot lengthening when he counterflex-spooked in the corner and I kicked him with my right leg (which he ignored) instead of tapping him on the hip. Annnnnd after that he gleefully realized that I didn't have a whip, so I spent the rest of the test pony-club kicking his ass around the dressage court and praying he wouldn't break gait (which he did, but only once). 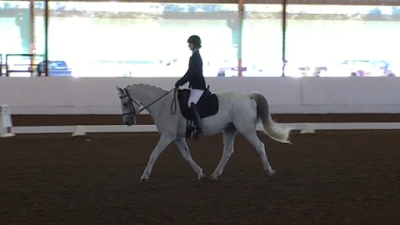 At least centerline went well... until about two strides after this when he started staring at the judge's booth. 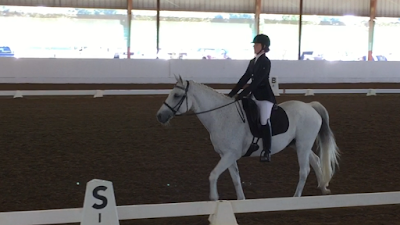 Maybe someday I will be able to ride a free walk - medium walk transition without the giraffe option. 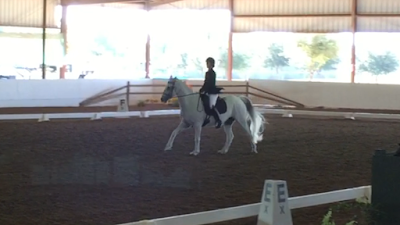 No amount of kicking convinced him to stay balanced and through in the canter. Blarg.

Because that's JUST the kind of ride you want to lay down in front of Gary Rockwall, who was the judge at C. He, uh, was also the US judge at the Olympics in Rio. Haha.


That test earned us a sad 62.353. Comments were all some version of "flat, unbalanced, downhill, quick" which was absolutely on the mark. I was pretty bummed because we'd had SUCH a nice warmup and his canter has really been getting more balanced, but hey, that's what happens when you have no whip or spurs. Another lessons learned. This score got us 12th out of 20, but another percentage point (which is about four points on a 1-3 test) and we would have been 7th. See what I mean about every point counting?

My second test on Saturday was SWDC Training 3. You're allowed to carry a whip for SWDC tests, so as soon as he thought about looking at something in the (big, spooky) arena, I gave him a little tap and he was all business. We laid down a good round, except the part where I haven't been riding T3 at home and some of my figures were a little off (how big is a 20 m circle again?). Still, it was a fairly pleasant test which earned us a 65.909.

There were 23 riders in that class, and the scoring got a little behind. For almost an hour, there were 5 rides that didn't have scores, and we were sitting in 5th. I was passing the time watching freestyles, frantically refreshing the online scores, hoping we could hold on for a ribbon (SWDC pins to 6th). But no such luck... we ended in 7th by one point. And sure enough, if I'd made those circles a little more round, and the serpentines just a smidge more accurate, I'm pretty sure that would have done it, based on the comments on my test.

Despite not having the rides I knew we were capable of, our scores were really not that bad, and so many riders were so close that every little bit made a huge difference. Plus, we had two more tests Sunday!
Posted by jenj at 9:12 AM