Shoulder in is hard, and I suck at it

We've been breaking down the pieces of second level in my regular weekly lessons. Sometimes it seems like there are so many things to work on, we'll never get through them all and be able to put together a decent test. Last time it was canter/walk/canter transitions, this time it was shoulder in.

I don't know why SI is so hard. It's like a leg yield down the rail, but not, because you're on 3 tracks instead of four. So you kind of have to keep your outside leg on so that the haunches don't escape, but not too much or you'll end up straight. You need bend, but not too much or your horse will just fall on his outside shoulder, and/or you'll shut down the inside hind (and you neeed that inside hind because that's what's doing all the carrying work in SI). 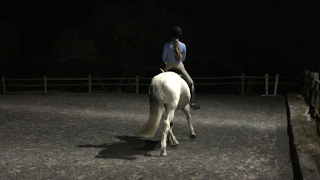 Speaking of falling out on his shoulder because I'm pulling his head to the inside... 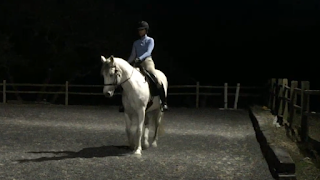 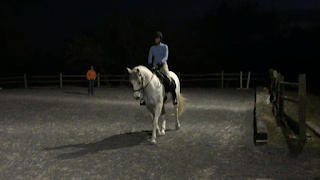 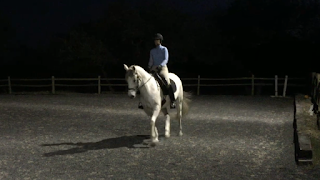 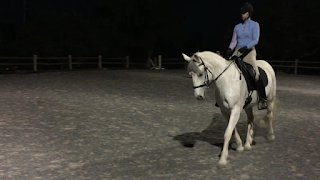 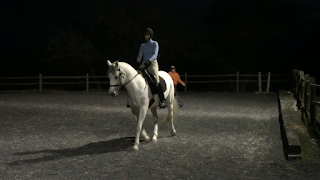 Taran has just given up on interpreting my cues and is just trotting nicely because he's good at that. 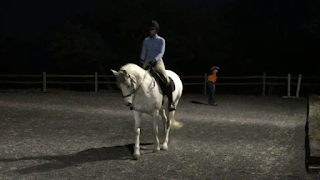 The most common way to school the shoulder in is from a 10 m circle or volte. But tracking right, I often fail to ride the last quarter of the circle, so T throws his haunches in and shoulders out, which is basically a recipe for how NOT to set yourself up for success. So instead we did a 12 step program for shoulder in: 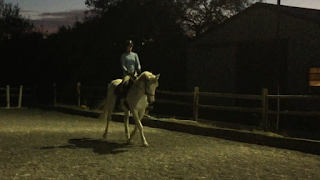 A step of leg yield. This we can do. 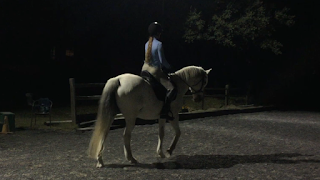 I don't even know what I'm doing here. Poor Taran. 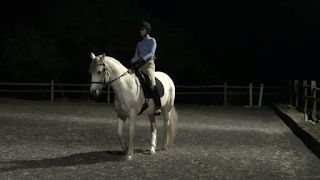 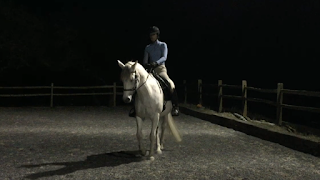 Still too much angle (4 tracks), but hey, Taran is straighter! (Unlike me) 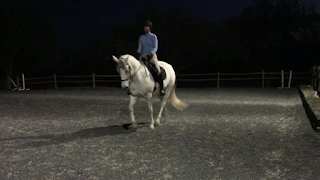 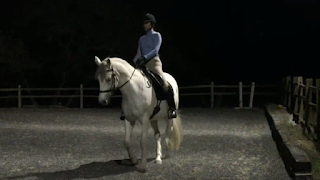 Nope.
I finally gave up and we went to a walk to try to get it sorted. I'm just not fast enough with all the body parts to make it work at a trot yet. It also helped when we changed direction, because he's WAY better to the left. I was able to feel what we were going for and then apply it to going right. 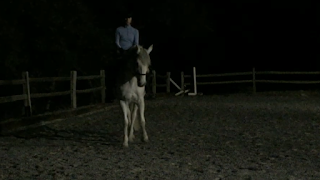 Straighter (both of us), AND (mostly) on three tracks. You can see how hard the inside hind has to work here and why you want to avoid shutting it down. 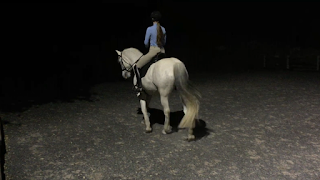 Getting the hang of it! 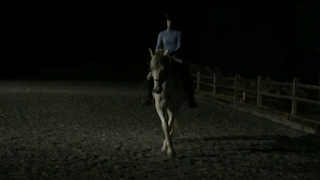 We need about a million more lessons on this so I can get the feel of what's correct, and I need a LOT of practice setting him up - and sitting correctly - to make it happen.

What are YOUR favorite tips for riding a good shoulder in?
Posted by jenj at 9:33 AM