After 3 solid years of USDF rated shows, I still get super anxious about showing. What I'm anxious about, I don't know, but one way for me to be less anxious is to show regularly. Unfortunately, until T and I are ready to rock Third, we're staying home, so I decided that Griffy could be T's stand-in. So with exactly one schooling show under our belt (where Griffy wasn't exactly an exemplary competitor), I decided to sign Griffy up for a rated show. What could possibly go wrong?

The drive to the show was uneventful (just the way you want it), and we got settled in Friday afternoon. Like a true Haffie, Griffy kept calling to someone, ANYONE at the show who he might know. Tragically for him, nobody answered. We got in a solid schooling ride, and although he looked around a little bit, he tried really hard and stayed focused on me for the most part. I headed to my favorite sushi place with a good friend after, and called it an early night.

Saturday morning I had plenty of time to get breakfast, panic, groom, panic, clean tack, panic, braid Griffy, and panic. I decided to split his mane, half on either side of his neck, and then sew the tail of his braid back up under, which worked kinda meh. Dude just has SO MUCH HAIR it's kinda ridiculous. 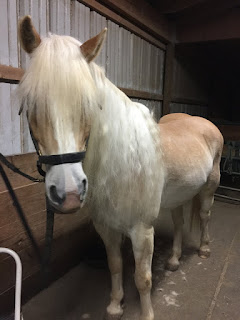 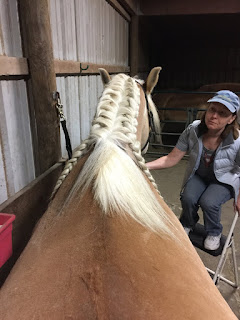 This worked pretty well though

Our first test was Training 2. My goal was to keep his trot tempo steady and his canter balanced. I literally counted "one, two, one, two" under my breath for the entire trot tour. Luckily the judge didn't hear us and it really helped keep me honest with the rhythm... and if I was on it, he was on it. Our canter departs were significantly more dignified than they have been, which was really huge. He stayed focused and soft and while the whole test was kind of unpolished, I walked out of the arena feeling like I really couldn't have asked for any more for his first time out. Our score of 69.615% was generous, but I'm also not going to complain about it! Also Griffy got his first blue ribbon at a rated show. 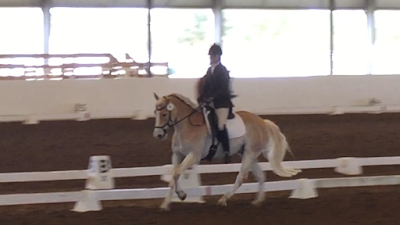 We had about an hour before Training 3 - just enough time to cool off and reset your brain. Griffy was feeling a little tired in warmup, and he starts to get a little nappy. He likes to lean on the bit and your left leg, fall on his forehand, and just generally say that he can't possibly do it. A few reminders that he has to hold up his end of the bargain if he wants to get fed, and he usually digs in and offers up his best work. It's kind of interesting, but he really does try if you ask him. 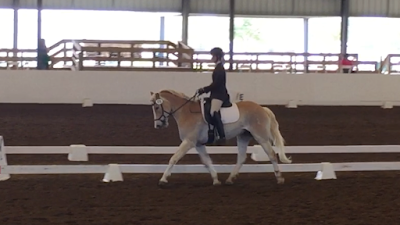 Could I please just put my hands down already

We had another pretty decent test, although we had a canter step in the trot and his canter got a little flat and unorganized. I wasn't as good about riding every step and helping him out as I was earlier in the day, and he seems to really need that from me at this point in his career, so that's definitely on me. Still, we walked out with a 67.955%, which counts as a qualifying score for regionals (both SWDC and GAIG). We were second behind a USDF Gold Medalist and her Very Fancy young Dutch Harness Horse (OMG SO FANCY), so I will totally take that. We also ended up reserve champion AA for Training Level, which I was definitely not expecting. 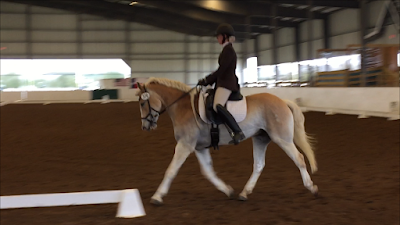 That moment when you boot your baby horse with your outside leg so he won't fall out of the arena.

Sunday was a repeat of the same, except that our T2 test was a leeeetle more exciting than I had hoped for. Halfway through our test, a horse got loose in the barn area and went galloping down the road past our arena, screaming his head off. All of the hamsters fell out of Griffy's head, and he was FOR SURE going to join said galloping horse. I had a number of Very Ugly Movements where I tried to both collect the hamsters and wrestle him around the arena in some semblance of the movements, but it was pretty much a lost cause. The judge wrote "horse needs more confidence" in the comments, which I think was a nice way of summing up "Probably need to work on your horse thinking he's going to die cold and alone in the sandbox." We got a 61.538% for our sad efforts, but I'm really not sure what I would have done differently to keep him together. Little guy just needs more miles. 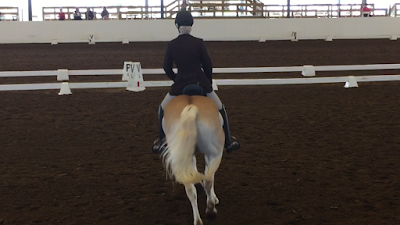 Also remember to tighten your girth before going into the arena so your saddle doesn't slip when your horse loses his hamsters.

I decided that I was NOT going to end the weekend on such a crap test, so I went into T3 with my whip (which I had not ridden with all weekend because he's usually too sensitive to it) and a whole bucketload of determination to redeem ourselves. While the test lacked polish, it was fairly consistent and earned us a 66.591%, for second place (behind Fancy Dutch Horse again) and another regional qualifying score. 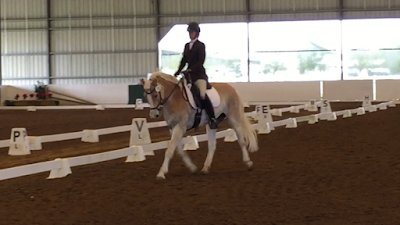 Not as fancy as Fancy Dutch Horse, but awfully darn cute

The icing on the weekend is that we qualified for a Training level freestyle... which means I FINALLY get to ride to Suicide Blonde by INXS. Because it's basically perfect Haffie freestyle music, amirite?
Posted by jenj at 1:57 PM