Although I know this blog is mostly dead, it's because this year has been so dang busy. Sadly I don't see that changing any time soon, but it is what it is.

We've been working this whole year on third level. Back in January we started on changes, and I swear it feels like we've been working on them ever since... and they are still not great. He's got a ballin' half pass at trot and canter, our rein back has gone from a 4 to a 9, his gaits have improved soooo much... but that damn change.

Until March of this year, Taran had never done a change under saddle (I've never seen him do one in the pasture either), and he's 16. Moral of this is, don't wait to teach your horse changes until this late in life. It really DOES take them a year to figure out the biomechanics, or so I hear. We're not quite at a year yet and we maybe only get a clean change 20% of the time.

If you're like me and you're also learning changes at the same time, well, you've got your work cut out for you. It's a struggle to contain their anticipation (because hey, you taught them a cool new trick and now they want to do it EVERYWHERE), keep the rhythm, straightness, and be uphill and THEN ask correctly for a change without leaning, pulling, flailing, ducking, or a multitude of (wrong) things you can do with your body. Even writing this makes it sound so much simpler than it is. Hopefully some day I will look back at this and laugh, but today isn't that day. On the bright side, my trainer can get clean changes about 80% of the time, so clearly we're down to rider error. Le sigh.

We'd planned to debut at third back in October, T tried to rip off his eyelid so we were sidelined. We finally made it out to a show the weekend before Thanksgiving. And while it's been our only show this year (what a change from 2017!), I'm so glad we waited. We were prepared, I knew we could do all the things, and I was ready to show off my little grey wonderpony.

We showed at a new venue, Haras, which you might recognize from Andrea's posts. It's a verrrrrrry upscale Lusitano breeding/training facility that hosts all sorts of Working Equitation competitions. They also hosted Charlotte du Jardin for a masterclass last year. Two massive covered arenas, OttoSport footing (watered by an underground system so no wet spots!), an on-site restaurant, hotel, and spa... this is definitely how the other half lives! 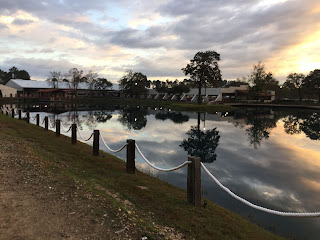 Sunset over the lake... you can see the two covered arenas on the other side

I arrived a bit later on Friday than I had intended and opted to do a long hand-walk instead of riding. I I knew the trailer ride would be a bit tiring for him, and I knew he wouldn't rest well at the show, so I wanted to save his energy. With the Cushings, managing his energy levels has become Something We Do, and I figured riding on Friday wasn't really necessary. Despite our last show being Nationals last year (!!!), T is generally good at new facilities and it wasn't like we were gonna put any more polish on. So we spent a long time wandering around, eating sniffing the plants, checking out the bleachers, and contemplating rolling in the arena.

One of the nicest things about going third is your ride times. GP goes first, on down to intro, so you're sort of mid-morning. Plenty of time to get up at a reasonable hour, feed, muck, braid and groom, get yourself ready and then ride. His braids were not the nicest ever (apparently going a year without braiding is not a good plan) but otherwise we looked pretty spiff. I started off the warmup super tense as usual, but worked through some breathing, moving, and stretching exercises and started to loosen up. T was a superstar and worked through our mostly walk warm-up, then moved on to quickly make sure all the buttons still worked. Forward/back, half-pass/leg yield, halt/rein-back, and one change each direction, done on a CC circle to true canter. They were both sassy and croup high, but whatever, I knew what we were going to get.

Coming down centerline for 3-1, I had such a huge smile on my face, I'm sure the judge thought I was crazy. WE WERE SHOWING THIRD!!! Unfortunately, the excitement got to me and I rode a very tense test, which means that I blocked T the whole time. We did all the things (well, the changes were... entertaining) but I knew it wasn't our best. I wasn't really happy with our performance and I knew we could do better.

We had a bit of time to wait until 3-3. I collected my test (62+%) and our ribbon (1st out of 2) and a mug (sorry, I still love swag, even if it was not my favorite test) and read over the judge's comments. We got a 5 on submission with "changes" circled and underlined, and I had a good laugh over that. The judge also noted that I'd taken 5 steps back instead of 3-4, so I figured I'd count to 3 and we'd get a better score. 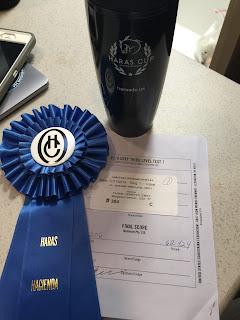 I rode an even more conservative warmup for 3-3 because he was a bit tired, but we both felt way more relaxed. He was SO BALANCED in the canter, I just wanted to ride it forever, and when I asked for our practice change, it was so clean, so uphill, so steady... so perfect. And of course it was in warmup lol.

This test was much, much more relaxed. I let him flow under me and pushed us both for bigger steps and better self-carriage.  I set him up in the corners and remembered to mostly get out of his way.

Annnnd then we did the changes. I have watched this little gem about 100 times and it still makes me giggle. Late tempis are not needed at third, who knew?


I was SUPER happy with this ride... the test was as mistake-free as I could make it, and except for the changes it felt really solid. I cooled T out and headed over to the show office to pick up my test, and just about screamed when I saw the 67+%!!!!! 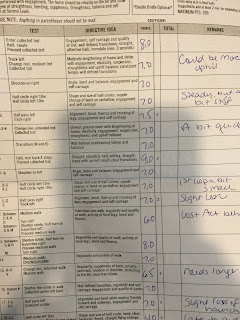 Note the NINE on the rein back! We have never gotten anything better than a 4 until this weekend. (not shown: 4s on the changes hahahaha) 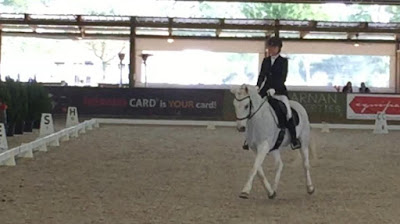 Yes please I will take that 7 on the extended trot thankyouverymuch. 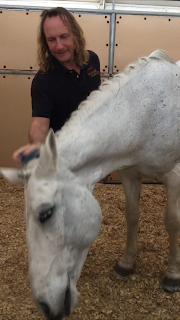 Also wonderponies require a lot of ear rubs an groomings 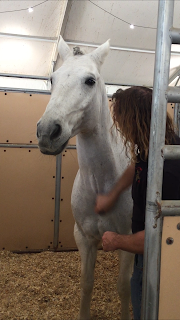 There are a lot of itchy spots, you know.

Hubby and I often use horse shows as a sort of mini weekend getaway, and this weekend was no exception. We spent the afternoon napping and relaxing in our camper (I did giggle gleefully every time I looked at my test), and then opted to get dinner at the on-site restaurant. 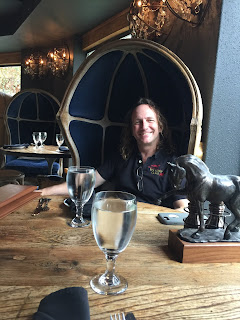 It was fancy and absolutely delish, and they didn't even mind our horse clothes.

Sunday dawned cold and rainy, and I was even more glad for the indoors than I was on Saturday. We stuck with our tried-and-true mostly walk warmup, and then did a very uninspired 3-1 for a 61+%. Probably I should be happy for 60+ our first weekend out, but really, we can do better than that. I just get SO tense for the first ride, it really stifles poor T. He can still do all the things, but he really can't do them well if I'm shutting him down every step.

Even with a less-than-satisfactory test, we'd set out to do what I'd hoped to: gotten our bronze medal scores and qualified to ride a third-level freestyle. I was super tempted to scratch our second test since I knew we'd both be tired, but I really wanted to redeem ourselves after another crap first test. Our last test was obedient but kinda flat. We were both tired, and no amount of fancy footing was going to fix that. We held it together and put in a mistake-free test for a 64+% under a much tougher judge, and I was super happy with that. Plus that got us a second qualifying score for regionals - not that we'll necessarily go, but we have it. 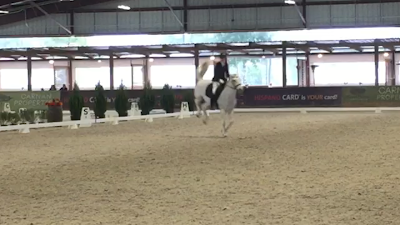 I think this is what they mean when they comment "croup high"? BWAHAHAHAHA

Funny story about the drive home... I was on a little backroad about 5 minutes from the barn, when i noticed a little red slow-down spot on my map. There was literally nobody else on the road, so I wondered what it was... 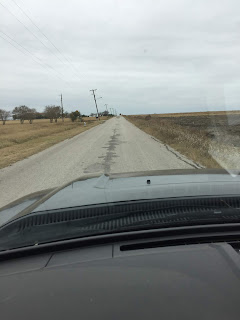 Not sure if you can see it, but there's a combine driving in my lane. The guy was texting on his phone and apparently Maps was tracking him going slow enough that its algorithm determined there was a traffic jam of some sort.


So Taran is officially a third level horse and a USDF bronze-medal-winning wonderpony. It's been a long year to get to this point, but I feel like we did it right and we are a solid team. As always, there is so much to work on, but every ride gets better and I'm starting to feel true self-carriage and unlock so many amazing things. We may not be the fanciest thing out there, but nobody tries harder or has a bigger heart than Taran. He's truly the Wonderpony!
Posted by jenj at 5:24 PM