Sometimes massive research projects start with a single Google image (the story of a 16th c. book on fighting from horseback)

Sometime in late summer 2019, I was looking at Google images of medieval horses, and came across a sketch that I hadn’t seen before. 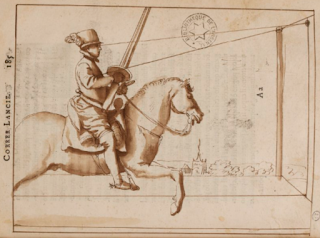 A little digging led me to the source, Regole di molti cavagliereschi essercitii, by Frederico Ghislierio, published in 1587 (online facsimile available from BNF Gallica). Although primarily a manual on Bolognese fencing, there were three chapters in the back that had to do with horses - and while the text was in Italian, I could pick out enough words to know that I really wanted to read it.

Naturally, I couldn’t find an English translation of the book. However, I know a bit of Italian, and I’d recently spent some time translating a couple of medieval French texts, so I figured I’d give it a shot. I’d “translate” a sentence, check it against Google translate, and look up anything weird on Wiktionary. Some sentences were pretty clear, but without a true understanding of Italian or fencing moves, some sentences were barely discernible. I also had a terrible problem with determining whether “he” referred to the rider, the horse, the rider’s weapon, the rider’s opponent, the opponent's weapon, or the opponent’s horse. Clearly, I needed help.

Enter Mattia C., a wonderful scholar - and native Italian - who I met in July 2019 at the International Medieval Congress. I reached out and asked him if he’d be willing to help with the translation, and he agreed. Over the course of the next several weeks, we met online and, line by line, refined the translation. Luckily, Mattia is an Historical Martial Arts practitioner and has a deep understanding of the fencing moves in the text, so he was able to fill in many gaps. We were also able to piece together the somewhat awkward descriptions of riding maneuvers such as turn-on-the-forehand and turn-on-the-haunches and how they were used in combat. 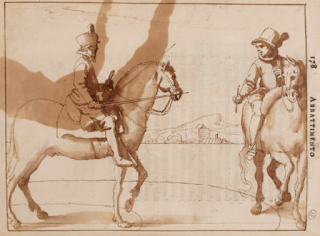 Notice what the horse on the left is doing with his hind feet, and note the circle inscribed on the ground by his front feet.

Several sections of the text included measurements for things like the length of the jousting lane and countertilt, the length of jousting lances, and the height of the ring for practicing targeting. Measurements were given in feet and inches, but exactly how big was a Bolognese “foot” in 1587?  Apparently, different city-states in Italy had different units of measurement into the 19th century when the metric system was adopted, and did you know there are medieval and renaissance measuring stones built into Bolognese buildings? All interesting, but not particularly useful for solving my measuring problem.

Somewhere along the way, I obtained a copy of a 1572 Bolognese fencing manual by Giovanni dall’Agocchie (original Italian version is available through the Internet Archive). Luckily, dall’Agocchie’s work has been translated to English by W.J. Swanger (you can purchase a copy here), which is how I learned that Ghisliero’s chapter on jousting is nearly an exact copy from dall'Agocchie's book... which means that the measurements in the two books should be the same. And, on page 66, dall'Agocchie includes a lovely a diagram of a “half foot,” complete with dividers for inches. All I needed to do was measure the diagram!

A beautiful diagram! Less helpful than one might imagine.

Alas, measuring the diagram was easier said than done. At first I thought I might be able to deduce the measurements based on the size of the original book, but none of the online facsimiles included the page size of the original, so that option was out. I tried to schedule a field trip to see the book in person, but the nearest copy is over five hours’ drive from me, and they wouldn’t allow me into the collection anyway. In desperation, I reached out to an equine scholar friend, who put me in touch with Kathryn R., whose university has a copy of the original 1572 dall’Agocchie print. She was able to make an appointment to see it and measure the diagram. It's a bit hard to know whether we are supposed to measure the distance between the lines for an "inch" or to include the lines, but overall the "six inches" is 188 mm, making an "inch" about 31 mm. Therefore a "foot" is 37.6 cm or 14.8 inches! 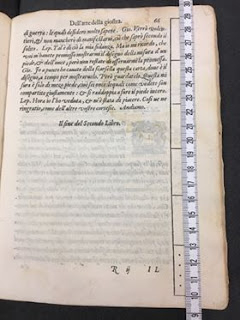 Apply these newfound measurements to Ghisliero's text, we get:

Regarding where to locate the ring to practice tilting at the ring:

Regarding the length of the lance:

Regarding how to set up a tilt and counter-tilt for jousting:

Thus brings to a close my months-long (and rather long-winded) quest to figure out the modern measurements used for 16th century jousting. There is still lots of information to analyze on fighting technique and horse footwork, but that is for another day. As always, more research is needed!

Special thanks to Mattia and Kathryn for all their help. Without them, I could not have assembled all the pieces!
Posted by jenj at 2:03 PM