Suspensory injury: How not to start off 2020

When I picked up riding Griffy again in late October 2019, I noticed that he'd occasionally take a weird step here and there. Sometimes he wouldn't do it for several rides, sometimes he'd take a few funny steps in a row. Most often it occurred when tracking left.

I had the vet out, and she saw something very subtle in the RF. He was slightly positive to hoof testers (we've been struggling with thrush), but only came partially sound when we blocked the foot. Flexions didn't make him worse, but radiographs showed a very thin sole (5-8mm), so we decided to start with the easy stuff and throw sneakers on and start him on hoof supplements.

The sneakers improved his foot comfort and landing tremendously, and let him use his shoulder more - but there were still some funny steps. 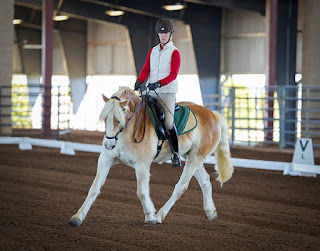 Fast forward to our clinic last weekend, and I could definitely feel it at times going left. My trainer agreed. I called the clinic Monday, and Griffy went in for diagnostics on Wednesday. Here's what my vet had to say:


His blocking pattern today, combined with ultrasound findings yesterday result in very high confidence that we are dealing with a primary suspensory issue.  It is hard to say whether the small lytic area in the 4th carpal bone is real or artifact and if it is directly associated with the proximal suspensory issue.  We would only know if this is playing a role by doing MRI and/or monitoring it radiographically during his rehab period.  If it is clinically causing an issue it should change radiographically.  If it is not it will stay static.  If it is an artifact, it won't be seen consistently on follow-up radiographs.

Basically, he has chronic damage to his RF suspensory, high up behind his knee. There aren't any lesions, but the suspensory is enlarged, and there's a lot of scar tissue. We suspect he got it either whilst playing with Leo (he likes to rear up and put his legs over Leo's back, often getting one leg stuck for several seconds), or in one of his patented rear-and-put-your-front-legs-over-the-stall-door moves. He's rarely stalled, but it happens occasionally when we travel, and he gets anxious if he can't see his traveling companion. 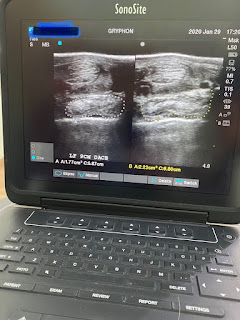 Right on right, left on left.

Unfortunately, chronic injuries are more challenging to treat than acute ones, and have a lesser chance of recovery. Treatment options include:
We opted to go with laser therapy since it seemed like the best options for his type of injury. We started today, and will be doing a month of treatments three times per week, and then reevaluate. 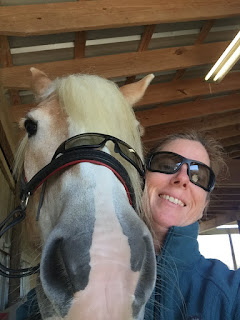 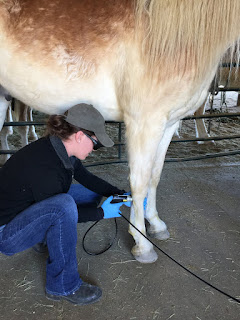 Hopefully this is magic.

The prognosis is guarded, and we're looking at about a 6 month recovery period. Still, I've got everything crossed that this little guy will come back. He reminds me so much of Taran, and we've made so much progress in such a short time. 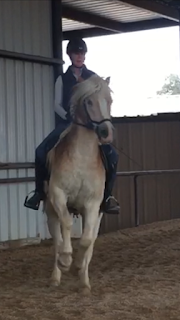 Like this one tiny pretend step of canter pirouette.
Posted by jenj at 12:30 PM