Many thanks to everyone for their comments yesterday... at this point I think we can drink our way through the day, starting with mimosas for brunch, white wine with lunch, moving on to margaritas with appetizers, followed by more wine with dinner, and finally some scotch to end the day. Party at my house, anyone?

Anyway, back to Saga... yesterday morning I dropped him off at the vet. I got a call mid-day saying that the farrier had been out to the vet clinic, and both Dr. Joyce and he had assessed Saga. There were no hot nails, and no abscesses to be found (yay!). Instead, they thought that the pad plus the pour-in gel were putting too much pressure on his sole, causing him to be lame. 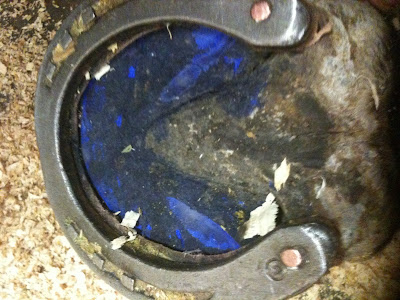 So, they pulled the shoes, removed the gel, and cut out the pad, then re-applied the shoes with just a leather rim pad. The purple stuff is Durasole, which the farrier recommended I apply regularly to help form a harder sole. The chemicals in it are kinda scary, and it won't help form a thicker sole, but... maybe it's a step in the right direction?

For those who were wondering why I said that Saga had a relatively good foot before shoes were applied, hopefully this picture helps. Fat frog, relatively good heel, and the deep crack in the central sulcus is healing up. Maybe they're not the best feet EVER, but definitely much improved from what they had been. Of course, there's still the pesky problem of a thin sole and event lines that have to be dealt with... but first I need to figure out what's causing them. 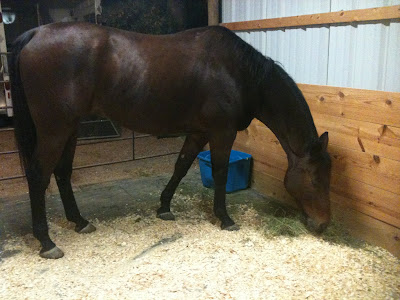 As for Saga, he looks almost normal. He was stepping out well when I picked him up from the vet, and is clearly putting weight on that RF that was bothering him so much just 48 hours ago.
I've been doing a lot of thinking about diet and such, and what's causing the thin sole and event lines, and I'm working on a plan of action. I'm worried about changing too many things at once, because then I won't know where the problem lies... but on the other hand, if I don't change things (and probably pretty drastically), his feet won't get better. More on that in a day or two, when I have a better plan. 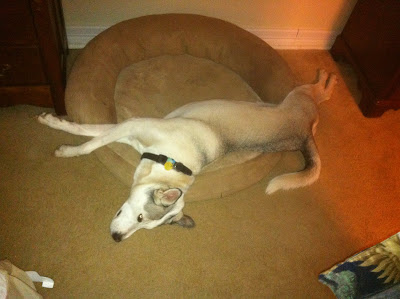 And since we missed mid-week critter and we probably all need some comedic relief, here's Elias trying (and failing) once again to sleep IN his doggy bed.
Posted by jenj at 7:10 AM