I think I've figured out - at least in part - why Saga has been tender in his front feet.

Part of it has simply got to be diet. I'm still digging into that. But as Nic points out with every horse at Rockley, good hoof health is a combination of diet and stimulus. I think Saga went from one extreme to the other in terms of stimulus, possibly in conjunction with an accidental change in diet. Here's the timeline: 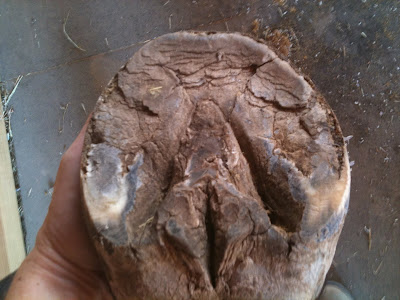 Saga's RF 1 month ago, 9/14/2011. TONS of false sole, which we left on, plus a worryingly deep crack in the central sulcus. I started treating daily for thrush.

With the original LF injury, which occurred about 1.5 weeks after he was trimmed, I started doing a lot of hand-walking. During this time, the false sole wore away. About this time I had to change to alfalfa cubes, and shortly thereafter I got a new load of hay. I think that the change in diet, combined with the lack of protective false sole, is what got us to where we are today. And no, he's not improved since yesterday.
Really. Frickin. Lame.

I did speak briefly with my vet today and she said to give him a week to get used to the shoes, but I really don't think it's getting any better. So frustrated, and bummed for my horse, who is still uncomfortable.
Posted by jenj at 9:18 PM