I just returned from a weekend visit to my parent's house - the long drive gave me lots of time to think about Saga's feet. Thanks to everyone who commented on my last post... I know I'm not really a bad horse mom, but I still feel badly that Saga's been uncomfortable and I didn't know why.

And actually, I *still* don't know why. Sole sensitivity is certainly part of it, but as of tonight, he is still short on the LF, which was the original lameness issue and has been the "problem foot" from day 1. I'll call the vet in the morning, but I really do think there's something going on higher up (i.e. something that didn't block the first time). But that's another problem for another day.

Back to the foot issue... one very kind reader (you know who you are) sent me a lovely email with some thoughts on Saga's feet. She pointed out that he has event lines and that there's something going on with his medio-lateral balance, since you can see the hairline is awkward. So I started thinking about the event lines. I guess I've been super-focused on the thickness of the hoof wall, the quality of the white line, and a nice heel-first landing (which seems to produce a nice, fat frog) that I'd forgotten a few other things. 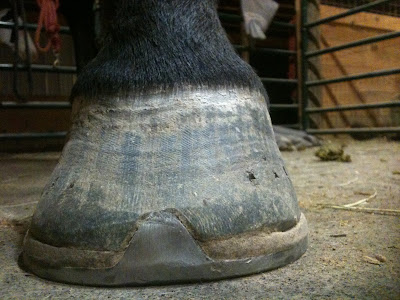 Here's Saga's LF tonight. There are definite event lines, and some of them are very close together. Assuming it takes 6-9 months to grow a new hoof, some of those lines look to be maybe 2-4 weeks apart. Odd...

Now as I understand it, event lines can be caused by changes in diet, vaccinations, and worming. Saga was vaccinated this spring, so that line should be grown out by now (or at least, down by the bottom of the foot, and likely rasped off by the farrier). He hasn't been wormed for more than 6 months (I do fecal testing and they came back negative, so no worming). He has been on the same diet for... gosh, 9 months now? Here's what he gets:
That's it. Pretty simple, eh? No changes. Except... I get new hay every ~2 months, and the last new batch came around 2 weeks ago. I also generally get alfalfa 10 bales at a time, and who knows where the different batches come from. 10 bales lasts roughly 15-20 days. Last time I couldn't get baled alfalfa, so I had to switch to alfalfa cubes, which were soaked before feeding. Also, about two months ago I couldn't get my usual beet pulp, so we had about two weeks were we used another brand. So while his diet is approximately the same (i.e. he gets the same weight in feed and the same type daily, but the source may differ), it's not exactly the same.

For entertainment, I took pictures of Cash's and Red's feet tonight, because they get exactly what Saga gets. 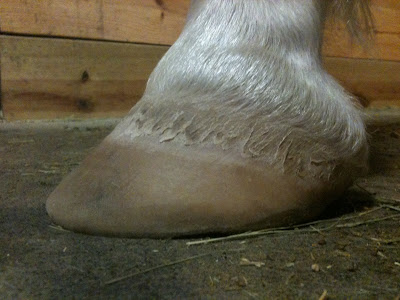 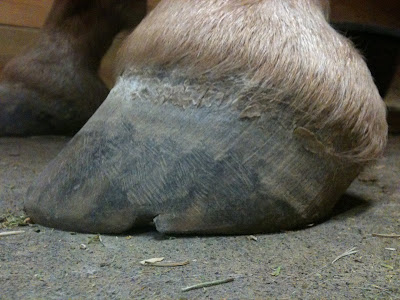 Reddums LF. Event lines anyone? Anyone? (Ignore the rasp marks - those are from when we tried to do glue-on boots.)

So if Red and Cash are eating the same thing that Saga is eating, but the two of them do not have event lines and Saga does... does this mean that Saga is just super-extra-special-sensitive to changes in diet? If so, that might explain the sudden onsets of lameness followed by improvement followed by lame days followed by... you get the idea. Is he somehow missing something in his diet that the others aren't? Should I have him tested for insulin resistance? Wild speculations are welcome...
Posted by jenj at 9:15 PM