And hay there, and hay pretty much everywhere!

The shipment of 840 bales of "Orchard Grass Mix" arrived from Ontario Saturday night around 6 pm. I went down to help unload it (yes, we had a bobcat, but we had to flip the stacks of 21 bales over and then slide them to the end of the semi for the bobcat to grab) and WHEW! that is a chore, even with machinery to do the heavy lifting.

Then Sunday, the owner of J&B Feeds (where the hay was dropped off) brought over 350 bales in two loads. He had helpers to take care of the first load, but it was just him for the second one, so Fuzzypony and I helped stack it. 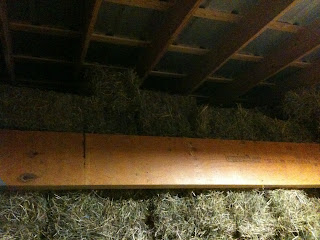 We filled the hay storage and then kept going up past the rafters, literally all the way to the ceiling! 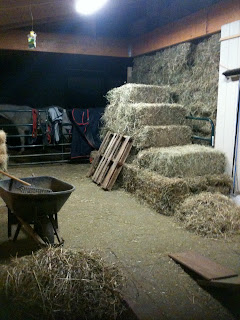 The last 30 bales ended up in the aisle. Holy COW that's a lot of hay, and I still have another 70 bales coming later in the week! The boys are just going to have to eat their way out, I think. I'm sure they will be terribly put out by this idea. 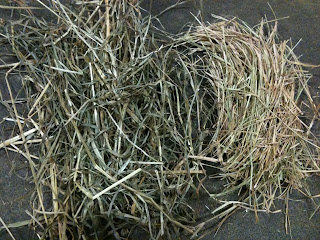 There's a marked difference between Orchard Grass (left) and our Central Texas Coastal (right). In fact, at first my hay guy was really worried that we'd gotten a poor quality batch, but a little research shows that it's just a different grass. It is definitely not the soft, thin-stemmed stuff we are used to seeing. Instead, there's a lot more variety, both in terms of types of grasses, as well as leaves and stemmy stuff. I'm really happy for the variety - Coastal hay is notorious for causing colic, and it's part of why I feed a little alfalfa on the side. 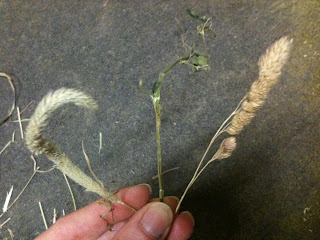 Here's  what I can identify in the hay, from left to right: timothy, alfalfa, and orchard grass. Someone from Up North, did I get it right?

As for the boys, they LOVE the new stuff. LOVELOVELOVE it. I'm trying to do a slow switch from Coastal to the new stuff, but they seem to have other ideas. If I put a mix of the two in their haynets, they flip the haynets around to eat the new stuff first. They (ahem, Saga) got into a bale of it over the gate and apparently had an all-night-snack-a-thon... and then didn't want to eat breakfast! Then of course there's the fact that they have the giant Buffet Wall to nibble on at any time... 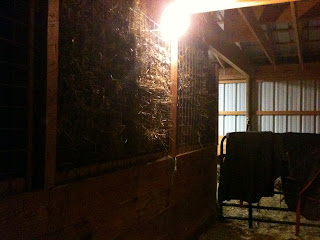 Giant Buffet Wall-O-Hay. I had to shoo them away to get this picture of it.

Yeah. They won't be starving any time soon.

I'll tell you what, though - after two weeks of buying fairly crappy Coastal hay at $15/bale, in batches of 10 bales ('cause the feed stores won't let you have any more, since they are trying to dole it out slowly) it does my heart good to have a barn full of hay. At $10/bale, DELIVERED FROM ONTARIO, I don't think I could have done any better.

I am very indebted to the owner of J&B Feeds, who went on this with me and agreed to buy the half of the load that I wasn't going to be able to store. Not only did he unload the hay with his equipment, he stored it and delivered it to me, and stacked it in my barn. The REALLY good news is that I think he's going to use the supplier in Ontario for several more loads through the winter, so I'm glad that will work out long-term.

Oh, just got a call from him... apparently Madalyn Ward just stopped by and LOVES the hay. Not only that, but he's going to send a sample off for testing, so I'll know exactly what's in it. WOOOT!
Posted by jenj at 7:45 PM