I mentioned in my last post that Red seems to get a bit back sore with extended riding. The real truth is that none of our saddles have been specifically purchased or fitted to Red, with the exception of my husband's jousting saddle. Our Wintecs have fit him well enough in the past, but if I'm going to be spending more time asking for more precise movements, I want to make sure his back is comfortable and stays that way.

Enter my amazing Reactor Panel saddle. I originally bought it for Saga, who had very high withers, a deep "hole" right behind his shoulder, and a long flat back. Yeah, it looks weird, but those panels float over the shoulder and flex with the horse. The difference between the RP and a traditional wool-flocked panel saddle on Saga was like night and day - he instantly stopped with the head tossing and "hopping" in the trot. *I* like the saddle because it doesn't have a super-deep "bucket" seat like some dressage saddles do, so I can get out of it if I need to. I've also discovered that because of the flexibility of the panels, it fits a variety of horses reasonably well, including Cash and Oberon. However, the panels were too long for Red, and came up well onto his shoulder. I knew (from ordering a show pad last fall) that I had the 24 inch "long" panels instead of the standard 23 inch panels, so I called up RP to see if I could order something that would fit him better.

The customer service at RP is second to none. I called up, they immediately put their master saddler on the line and pulled up the info about my saddle. Mine is a Baker with a 13 inch tree - a good, standard size - but the Bakers tend to run flat so there was some concern it might not be a good fit for Red. They explained how to pull off the panels and take pictures of how the saddle sat on Red's back, which I dutifully did. 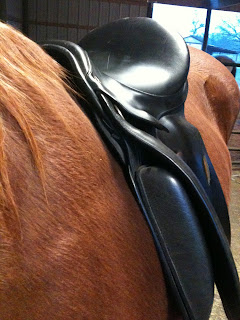 It doesn't look like there's much wither clearance, but that's because there aren't any panels on the saddle. Overall the saddle sits on him well. 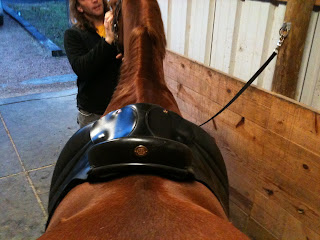 One nice thing about Red being the size he is - I didn't need a stepladder to take this picture! 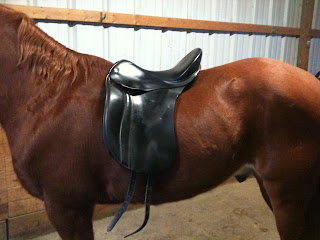 Looks pretty good (erm, except for needing a good cleaning)!

I heard back from them after about 3 business hours (!!!!) and they confirmed it looked like the saddle would fit him well. We got the panels and the disks (which stick the panels to the saddle) sorted out, and everything should be here today. Not only that, but they agreed to exchange the unused white show pad I got last fall for the long panels (unused b/c Saga was injured just after I got the pad) for the same pad for the regular panels. Wow! It's been almost 5 months since that pad was purchased, but they were very understanding and said it would be no problem. How nice!

So, fingers crossed that the new panels will make the saddle nice and comfy for Reddums. Certainly it's a whole lot less expensive than buying a whole new saddle!
Posted by jenj at 12:43 PM