Dressage school and jumping lesson with the Redster

I believe there are a couple of folks out there who are proud owners of amazing chestnut ponies – and not that I ever doubted you, but I am finally coming to an appreciation of the awesome power of the Red-headed-attack-pony!

Wednesday evening, hubby went for his dressage lesson and I came along to school. After Red’s back soreness over the weekend, I added a fleece half-pad and used the old folded towel trick (classy!) to raise the pommel of the saddle a bit. He certainly felt much more forward and freer in his shoulders and back – so much so that I could NOT sit his trot for love nor money. Our upward trot and canter transitions were much better, and he’s getting SO much stronger in the canter, particularly to the left. Which is funny, since two weeks ago his right canter was stronger. Oh well. The downward transitions were still pretty messy, but at least we are getting them more-or-less on schedule. I think part of it is that I need to have him more collected and slower in the trot to nail the downward trot-walk transitions, and he was just forward-forward-forward. Leg-yielding into and out of transitions worked pretty well, but I really felt like I could have used some magic trainer dust from the weekend for a smoother ride. Don’t you wish you could bottle that stuff and use it when you need it!

Last night we took a jumping lesson, the first in a long while. Red was a total star, although he likes to take the short spot. I worked on riding the canter stride all the way to the fence, instead of trying to pick a spot, and keeping the RPMs up all the way to the base (Shoulders Back! Leg ON!). It feels like we don’t have any speed because he doesn’t cover much ground with each stride (we made a tidy 5 strides in a 4 stride line), so I have to resist the urge to let him flatten out and run. I also have to almost sit in the saddle in order to keep my upper body back – I think this has to do in part with the fact that I’ve got a very long torso and he’s got a very short neck. If I get even a tiny bit forward I’ve practically got his ears up my nose. If I ride in a tiiiiny half-seat, stay steady, up, and back, and keep my leg on, he jumps tidily around every damn time. If I get a little ahead, we chip. We only had one really truly awful chip where I ended up on his neck and he would have had every right to stop, but he jumped for me anyway because he’s such a good boy. We even blasted over a 2’6 fence that had a Christmas tree under it – he jumped so big and round he about threw me out of the tack. Ooops! We finished up with a few confidence-building (for me, not him) fences, and called it a day. 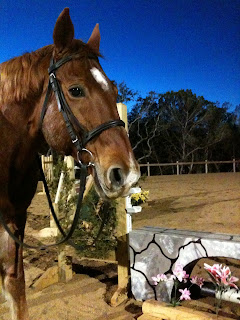 Yes, I jumped this. No, I did not try to eat the pink flowers. Much.

He’s got tonight off, and then I’ll give him a short dressage school tomorrow. We’re not super-prepared for the show on Sunday, but I’m confident we’ll make it around if I ride well. He’s certainly got the heart for it, I just need to believe that we can put in a good team effort and get the job done. 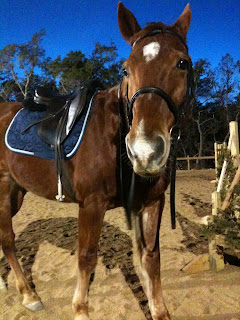 Too bad mom's eventing vest and stuff is all green. I look so awesome in blue!
Posted by jenj at 1:17 PM