Reddums - secure in his masculinity

Let's get the important stuff out of the way. Red ended up wearing a pink plaid blanket this weekend. 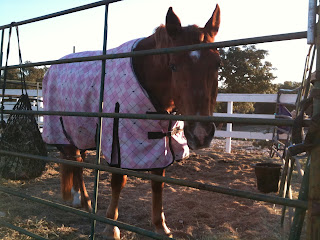 Only Feerless War Ponies can rock this look.

If you know me even a little, you'll know that I absolutely abhor pink. Passionately. I'm fairly sure I haven't owned a pink clothing item since I was about 8 years old (and Mom? Those pink outfits when I was really little? We need to talk.) There is no pink anywhere in my house - in fact the very first thing to go was the Pepto-Bismol pink tile bathroom. So for any horse of mine to be wearing something pink... well you KNOW there had to be extenuating circumstances.

Saturday morning we headed up to jousting practice with some friends of ours. We've got a big demo mid-March, so we wanted to get as much ride time in as possible. Red doesn't joust anymore, but I'm riding him in the mounted combat part of the demo.

Yep, you heard right. I'm armoring up and we're going to go whack people with swords. All in the name of charity - the Pin Oak Charity Horse Show, to be exact.

You see, combat is totally Red's thang. He is absolutely not afraid of any horse out there, and he knows that his rider is going to smack the other riders. He's also super-maneuverable, spins on a dime, and can dart in and out at a moment's notice. He LOVES this game. 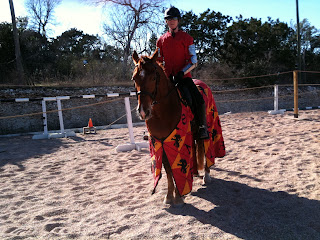 Objects in photo are much fiercer than they appear. 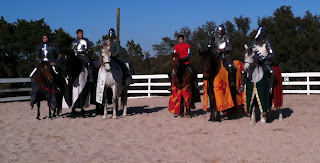 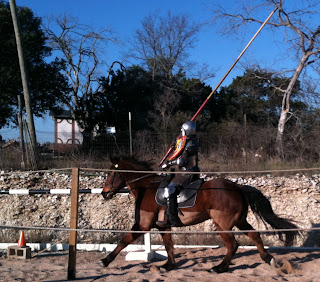 Alas, I don't have any pics of Red doing mounted combat, but here is a pic of hubby and Oberon doing some jousting practice. Go Oberon GO! 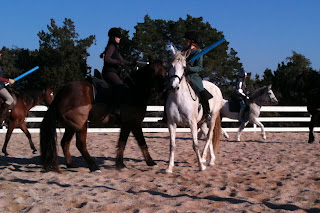 I also worked with Oberon in mounted combat. That's me on the left. 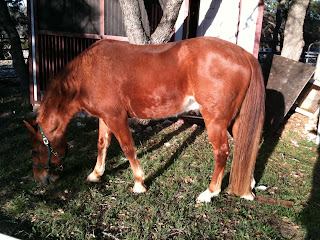 And at the end of the day, Red handily doubles as a lawn mower. How much talent does this guy have?

Between the jousting practice for hubby and the combat practice for everyone, Saturday was a long day. We also decided to fit in another practice first thing Sunday morning, so we ended up leaving the boys at our friend's house Saturday night. It was in the 30s, I hadn't brought blankets for the boys, and Red grows almost no coat. DA very kindly loaned Red the pink plaid blanket, since it was the only thing that fit him.

It's a good thing that Red's so studly and all. I mean, not every gelding can pull off pink plaid.
Posted by jenj at 9:41 PM