This time next week, I'll be taking a lesson on Echo, just before stuffing him in a trailer and bringing him home.

And not a moment too soon, either. The working student who is riding him wants to keep him. Adopted Horse Dad says he's going to find another horse with the same markings and give me THAT horse, so he can keep Echo for himself. Adopted Horse Mom is probably tired of my calls, but has nothing but good stuff to say about how smart he is, how willing, and how calm. 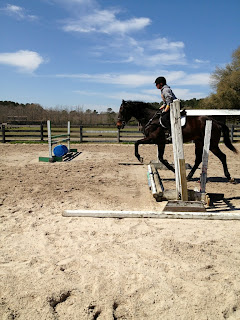 How I wish this were me riding him.

Hopefully he'll stay that way once I get him home, lol!

Yesterday (Friday) was his sixth ride. He's really pushing from behind in the trot, very balanced and steady. They have started him over poles on the ground, and yesterday did a tiny X. Adopted Horse Mom says he approaches everything carefully but boldly, figures it out, and then does it. He's careful with his feet and doesn't rush things. He also now eats carrots, and yesterday was his first time to use a mounting block - which he apparently did like he's done it all his life.

It's kind of like having your child come home with all A's on their report card, you know? 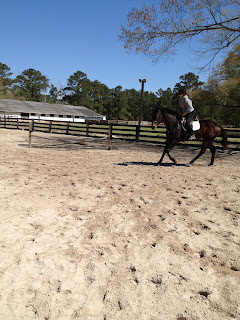 The only thing of concern is that he doesn't have much energy. We're not sure if this is just him being really laid back (not a bad thing!), or if he needs a different feed. He's currently getting 12 lbs of TC Senior per day, which is what is most comparable to the feed he was getting at GoldMark. I contacted Triple Crown (LOVE their online chat feature) and asked for a recommendation for a higher-energy feed. When he gets here, I'll be moving him to TC Complete, which is about the same in terms of fat and protein as the Senior but has a bit more calories per pound. We'll give him a few weeks on that, along with all the hay he can eat, and if things don't change, we'll add in some ground flax.

I feel like a kid at Christmas or something. I can hardly wait till next Saturday!