Lots has happened since I posted about my whirlwind trip to Ocala to meet Echo Tango. First off, I officially bought him! I have the registration and Jockey Club transfer papers in my hot little hands, woot! Then last week he got shipped from Ocala to the New Orleans Fairgrounds, where he was picked up (at oh-dark-thirty in the morning, when apparently everything happens at the racetrack) by my Adopted Horse Dad.

Quick aside: my parents are sailors. When I was growing up, they knew nothing about horses, so I had to go find some horsey parents. My dad used to work with Adopted Horse Dad, and Adopted Horse Mom is the one who taught me to ride with an independent hand and seat (six months on the longe line, thank you very much). Adopted Horse Parents still live near New Orleans, and offered to get Echo and board him until I could come pick him up. BEST PLAN EVER!!!

Anyway, Echo is going to stay with Adopted Horse Parents at their lovely facility until I can get him in mid-March. They have a lovely working student who is going to put in a few rides on him for me.

Although I really want to call every few hours to ask how Echo is doing, I've been restraining myself admirably (earlier this week I went three whole days.) Apparently Echo has been very good so far. He's been seen by the vet and had his teeth done, and we also wormed him since he was looking rather ribby despite quite a lot of feed (fecal came back negative, but who knows what's encysted?). He's been getting as much turnout as possible, despite the monsoon rains they've been having. However, he spends most of his time staring over the back fence at the neighbor's cows. I rather doubt he's ever seen one before in his life. 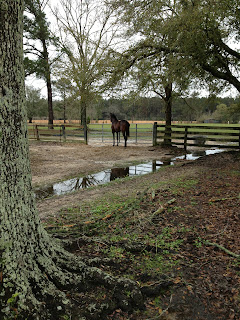 I've asked Adopted Horse Mom to have a talk with him about the cows. 'Cause, you know, there are cows in Texas. A LOT of cows in Texas. And um, we have mini donks next door to us, and llamas across the street. Horse-eating llamas. I can't wait for that encounter!

Anywho, this Thursday, they took him for a bit of an in-hand walk to the arena. He spooked once, which involved planting all four feet and looooking at a cow that had stood up 300 yards away. I'm good with that kind of spook! In the arena, he was very interested in the blue barrels. Apparently he stood and looked at them for a moment, but eventually approached them and touched one with his nose. It was set between two ground poles, so when he touched it, it rocked. HORSE TOY!!!! He spent the next few minutes entertaining himself by rocking the blue barrels. After that, he didn't bat an eye at them. 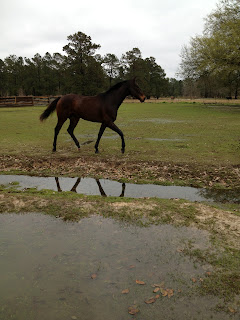 He may need a snorkel and floaties if he's going to stay in Louisiana for much longer!

Yesterday was his first ride. Adopted Horse Mom said that he "didn't put a foot out of place." He continued to keep one eye on the cows, but she said his steering was quite good (considering), brakes were good, and he's already starting to reach forward and relax into the bridle. This is the kind of progress report a horse mum likes to hear!

They will continue to squeeze rides in when they can between now and the 16th, when I pick him up. Which is in 14 days, 5 hours, and 23 minutes. In case you were wondering.