Off to a slow start

As you might imagine from the lack of posts, things haven't been going exactly as planned since Echo the Wonder Pony arrived. I'd arranged for some lessons, imagining that we'd get to work right away and continue with the great training that he got at Adopted Horse Parent's farm. I'd arranged for the saddle fitter to come out, hoping that something in the tack room would fit him (because really, we're out of saddle rack space. Yeah, that's it...). I'd even started penciling in some low-key dressage shows in May, just to get him out and about.

And then... Oberon bit him. Over the fence. Right where the saddle goes.

Ok, fine, lots of Derma-gel, a week off for that to heal, and in the meantime, I start working on the perfect blend of fat, fat, and more fat, in an effort to fatten him up some. I guess I'm just used to nice round quarter-horse types, 'cause in comparison, Echo looks sort of like an anorexic supermodel.

Then it rained for a week, so no riding. Echo focused on getting fat and sassy, and getting a few more ground manners.

So, finally, we're ready to ride! We go out on our second-ever trail ride, where he is good as gold, happily following Taran and not spooking at a thing. When we return to the barn, I'm picking out his feet when I notice... he's twisted his shoe. And ripped off half his hoof with it.

Really alert readers (with really good memories) will remember that when I first met Echo down in Ocala, he had a major chip out of his toe and was a bit sore. They slapped on some racing plates and he was fine. 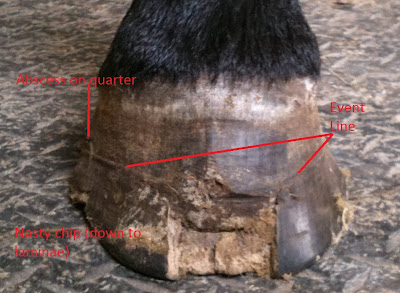 Here's what his foot looked like mid-February. The chip out of his toe is down to the laminae. Believe it or not, he was only a tiny bit off when this happened.

However, he also had an abscess hole in his hoof wall on the outside quarter, and the hoof wall from the toe back to this hole apparently wasn't terribly well attached. The toe chip went first, then when the shoe twisted, the rest of the hoof wall came loose, all the way back to the abscess hole on the quarter. 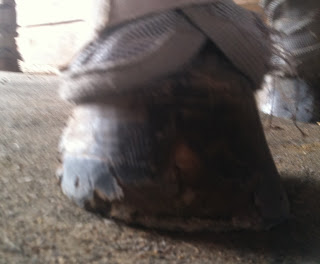 This is right after we pulled the twisted shoe. The hoof wall is still there on the outside, but you can see the crack that goes all the way up to the event line. The wall isn't actually attached where the nail holes are - it's just sort of hanging on. Nothing solid to nail a shoe to.

As you might imagine, this caused Echo to be rather sore. A shoe would have helped protect the area until the hoof wall grows out, but there's literally nothing to stick a shoe on to. So, I had to wait for my trimmer to come out and put a hoof cast on instead. 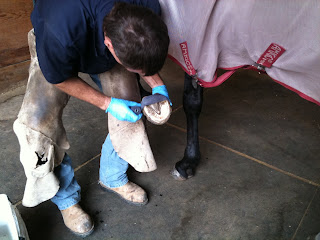 Starting the casting process. You have less than about 3 minutes to get it on before it starts setting! 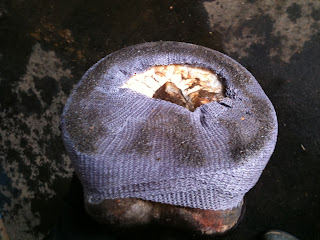 Cast from the bottom. Note how it makes a little rim on the hoof wall, sort of like a shoe? Pretty cool, huh!

A closer look at the entire hoof - and his other feet - and my trimmer pieced together what probably happened. Some sort of metabolic event about 4-6 months ago apparently caused two abscesses on the coronet band - one on the toe, and one on the quarter. When I got Echo, these abscesses had long since blown out, and what was left were two holes in the hoof wall. The toe abscess chipped out first, mid-February. The shoe helped hold the hoof together for another 6 weeks, but eventually the hoof wall on the quarter abscess gave out too. And that's where we're at now - Echo literally has about half a hoof wall, poor guy.

The good news is that the hoof cast worked wonders! Echo is now sound and happily cruising about. Of course we've had more rain, but I've been able to get some solid rides in and finally a lesson, with another one scheduled for tomorrow. So, riding update is soon to come!
Posted by jenj at 4:07 PM