The first month of Echo

I realized the other day that it's been a whole month since Echo arrived at Wyvern Oaks. We didn't get off to as good of a start as I had hoped, but sometimes that's how it is with horses.

However, in the last week and a half, we've had some super nice rides. We took our first lesson with my jumping instructor, although we didn't actually jump anything. Instead, we focused on getting Echo to stand up straight under himself (that is, not fall in while staring at things outside the arena), give a little to the bit laterally (that is, follow my hand around a circle), and disengaging his hindquarters under saddle. The real point to all of this is to get Mr. Distracted to focus on me, instead of spending all his time watching everything else that's going on around and outside the arena. It's interesting because he'll do what I ask, but it's almost an afterthought. I'm definitely not the focus of his attention, and while I don't expect a whole lot at this stage, we need to start in that direction.

We've also been doing a lot of walks down the street, just for building muscle and seeing the world. We've nosed mailboxes, trash cans, and traffic cones, talked to people driving (slowly) by, met dogs of all sizes, stomped on a few manhole covers, and met all the neighbor's horses. So far the only thing that he's actually spooked at was a deer, who spooked at him first. I'm not sure who was more surprised! He just sort of spooked in place and then snorted at the deer, who went bounding off down the street. Good Echo! He's also getting braver about being way out in front of our riding buddies. Either that, or he thinks he's "winning" whatever race he's in. 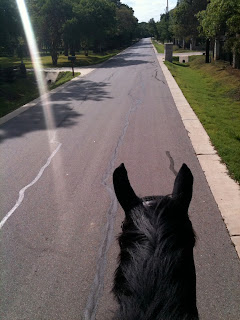 I've started to longe him as well, to work on having him focus more on me. The first time made me think that he'd never been longed before, but I swear they told me at Goldmark that they trained all their horses to longe. He stopped and turned in, cut off sides of the circle, bolted around (very tidily and balanced), and pretended he didn't know any voice commands. We worked for perhaps 15 minutes total, and called it a day when he did 2 whole trot circles each direction without running off or trying to run me over. The funny thing? Every time since the first, he's been an angel. Prompt to the voice commands, nice round circles, no turning in. Soooomebody is trying to fooooool me, I think! This boy is definitely smarter than he looks. I'm going to start incorporating very loose side reins in our next couple of sessions so we can start working on strengthening his top line a bit. 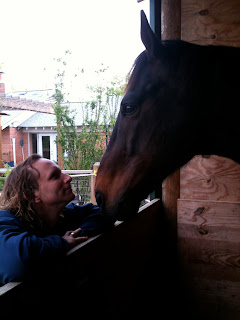 
Last night we managed to squeeze in another jumping lesson and Echo was 100% improved over the last one. He's doing much better with not falling in, and much better following my hand.  Paige commented on how much he's improved in such a short time. We even did some "jumping" - trotted over two poles in a "line", then over a stack of three poles, and over a tiny X. It was toward the end of the lesson and he was not as forward as I would have liked, but the second and third times through he really put the pieces together and made a tidy job of it. We even cantered away from the final X in a nice, balanced rhythm. When I went over to chat with Paige, she was like, "Um, so what do you think about making him a hunter? 'Cause he's got the movement to go far." I laughed and told her that the only hunting he'd be doing is field hunting! Then she kept dropping hints about what a cute baby hunter he was, and how nice he'd look in the pre-greens, lol! Honestly I wouldn't mind taking him to some schooling hunter shows just for the miles, but I can't STAND the way they run the classes and how you never know when you're going to ride. At least with eventing you know exactly where you need to be and when - that makes my little OCD self quite happy, thank you very much. 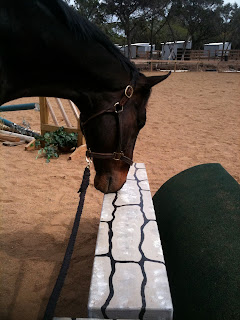 Next week, we jump this. Or eat it, he's not sure which.

This weekend my schedule is clear, so I'm looking forward to lots of saddle time. Yay progress!!!
Posted by jenj at 9:23 PM