I got to ride SimonPants again!

Lauren and I are taking advantage of both being at the same barn and getting some extra ride time in. She’s riding Paddykins for me when I can’t get out and she has time, and I got to ride Simon for her last night. Let me just say it’s so AWESOME to ride an actual trained horse! I mean, I love Paddy, but Simon has all these buttons and this lovely, steady way of going and he’s just so much fun to ride! 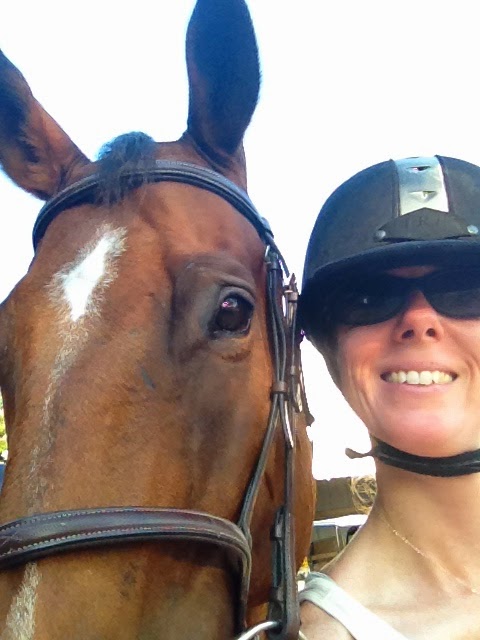 If you’ve been following Lauren’s blog, you’ll know she’s worried about Simon’s mysterious hind-end weirdness, where he takes an off step every now and again. We’ve talked about it a lot, and she asked me to tell her what I felt when I sat on him.

First, and most importantly, Simon doesn’t seem to be in any pain. He was super happy to get out and work, very cooperative and tried really hard for me. I swear I’m going to turn him into a dressage pony!

One thing I noticed right off the bat was that my right hip was being moved around a lot more than my left, even at the walk. This is consistent with the vet’s report that he picks his right hip up higher than the left. You can actually see this if you watch the top of Simon’s butt as he moves away from you. Simon’s right hock is the one that’s in the process of fusing, so it’s possible that he’s trying to compensate for the lack of range of motion in the hock with more motion in his hip. Kind of like if your knee didn’t bend, you’d have to pick your leg up from your hip.

Simon is quite stiff laterally, meaning that he doesn’t bend much in his body or neck - especially to the left. Horses are generally more stiff on the side opposite from the side they won’t bend, and this makes sense if Simon is compensating more with the right side of his body and is therefore less flexible on that side. However, when I insisted that he bend, he tried really hard and gave me some super nice soft moments – what a good boy!

I pushed him a little to see what might help him (or make him worse), asking for a little shoulder fore, some leg yield (without losing the shoulders, thank-you-very-much!), and some spiral-in-spiral-out on the circle. I asked for a lot of forward and a lot of inside leg action, even just on the straightaways and in the corners. In our first trot circle, on a long-ish rein with no forward, he mis-stepped behind three times. However, the more I asked for, the less of a problem he had – he only mis-stepped five more times in my entire ride, and always in places where the footing was a bit deep/churned up. It was always the right hind that took the funny step, and it happened mostly tracking right. It was also very, very subtle – more like a “whoops, I forgot that foot!” than an actual lame step. My guess (and I’m no vet) is that he occasionally has a bit of trouble compensating for the loss of motion in the hock, which results in a very subtle funny step that’s hard to see from the ground but can be felt from the saddle. The more he’s asked to engage, the less of a problem it is. 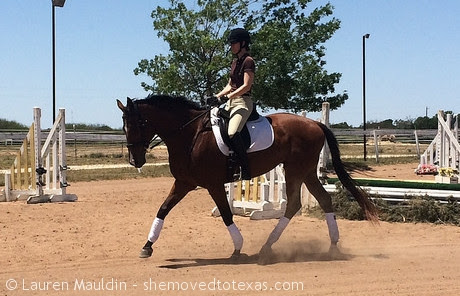 Not yesterday - yesterday was even better! Photo shamelessly stolen from Lauren when I got to play dressage with Simon once before.

Obviously, the solution is for Lauren to start riding dressage on her lovely dressage horse. Wink-wink-nudge-nudge. ;)