Yesterday I posted about how not to prep for a show. But despite being perhaps the least prepared I've ever been, we still managed to pull ourselves together and put in two respectable tests.

We arrived to the show right on schedule, checked in, unloaded, and then got tacked and dressed (thanks to my awesome pit crew for all the help!). We headed over to the arena with exactly 25 minutes to warm up, only to be told they were running WAY ahead of schedule and I was up next. Uh... okay? Fortunately, the gentleman riding right after me agreed to change places, so I had about 7 minutes to warm up. But for some strange, unknown reason, Paddy was... normal? Not quick or bargey? Paying attention? I wasn't sure where this oddly obedient Haffie had come from, but I certainly wasn't going to complain. I did some laterals to get his hind end activated, and a couple of walk-canter transitions to get him up in front, and we went into the arena with that. 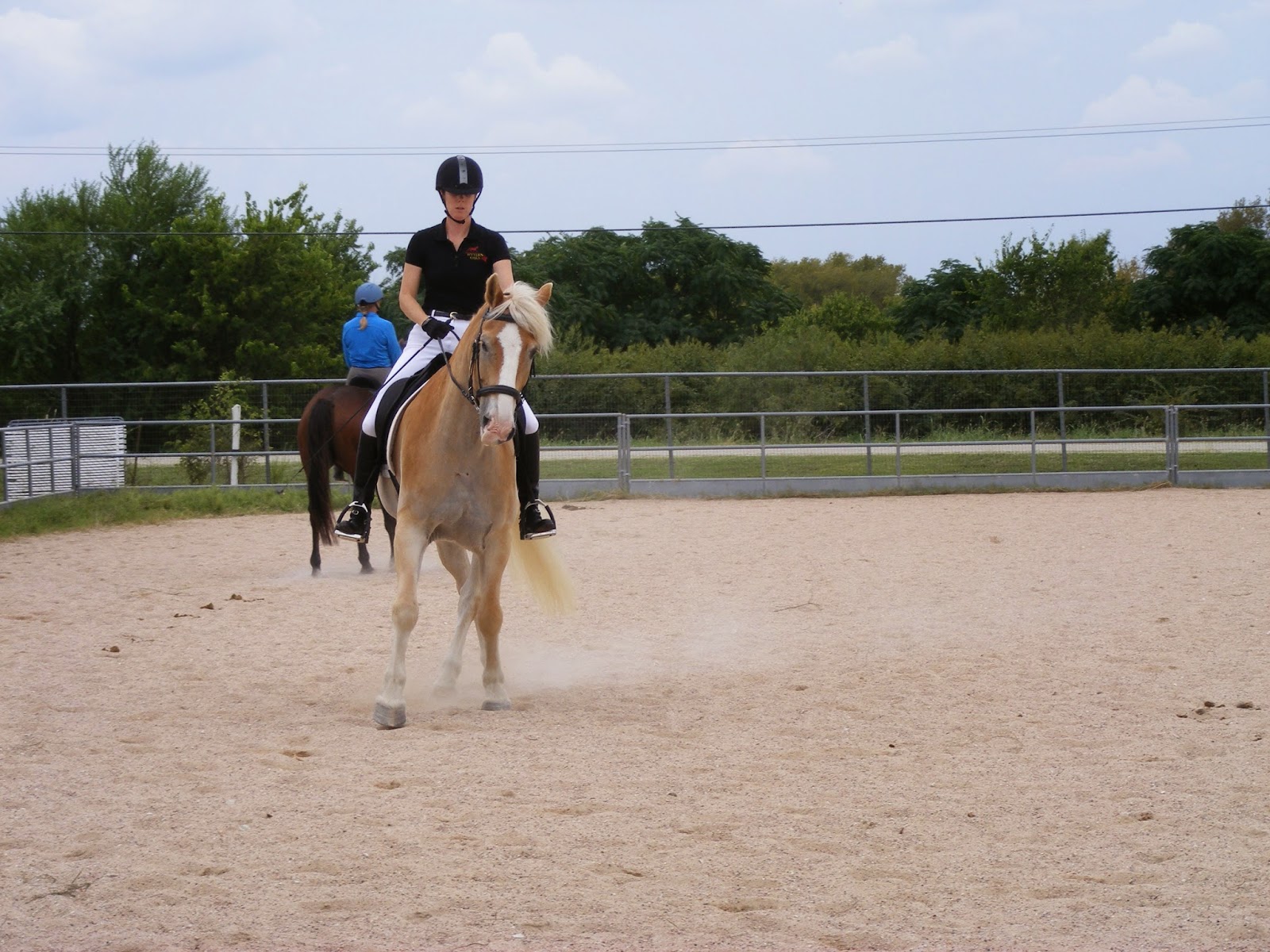 Check out the crossover on that left hind! 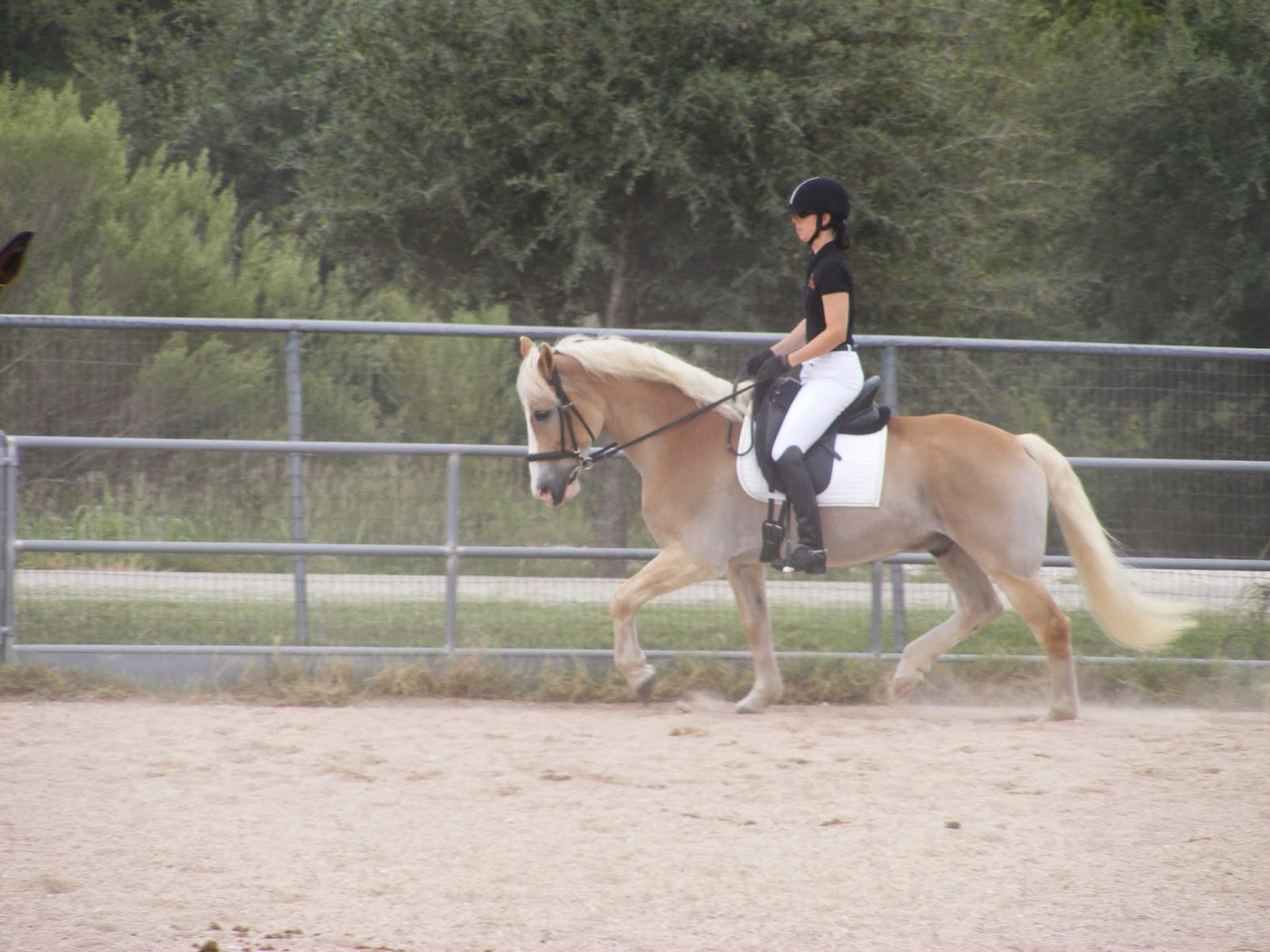 Warmup on short notice? No problem!

I actually felt like it was a DAMN good test, considering he had the summer off due to injury. Sure, the canters were bargey and on the forehand, but that continues to be an ongoing problem for us and probably will be for ever and ever. But I felt like our trot work was really consistent, he was bent, in front of my leg, and generally really obedient. I ended the test with a smart salute and a big smile and pat for Paddy, then went out to stand around for 20 minutes until our next test. 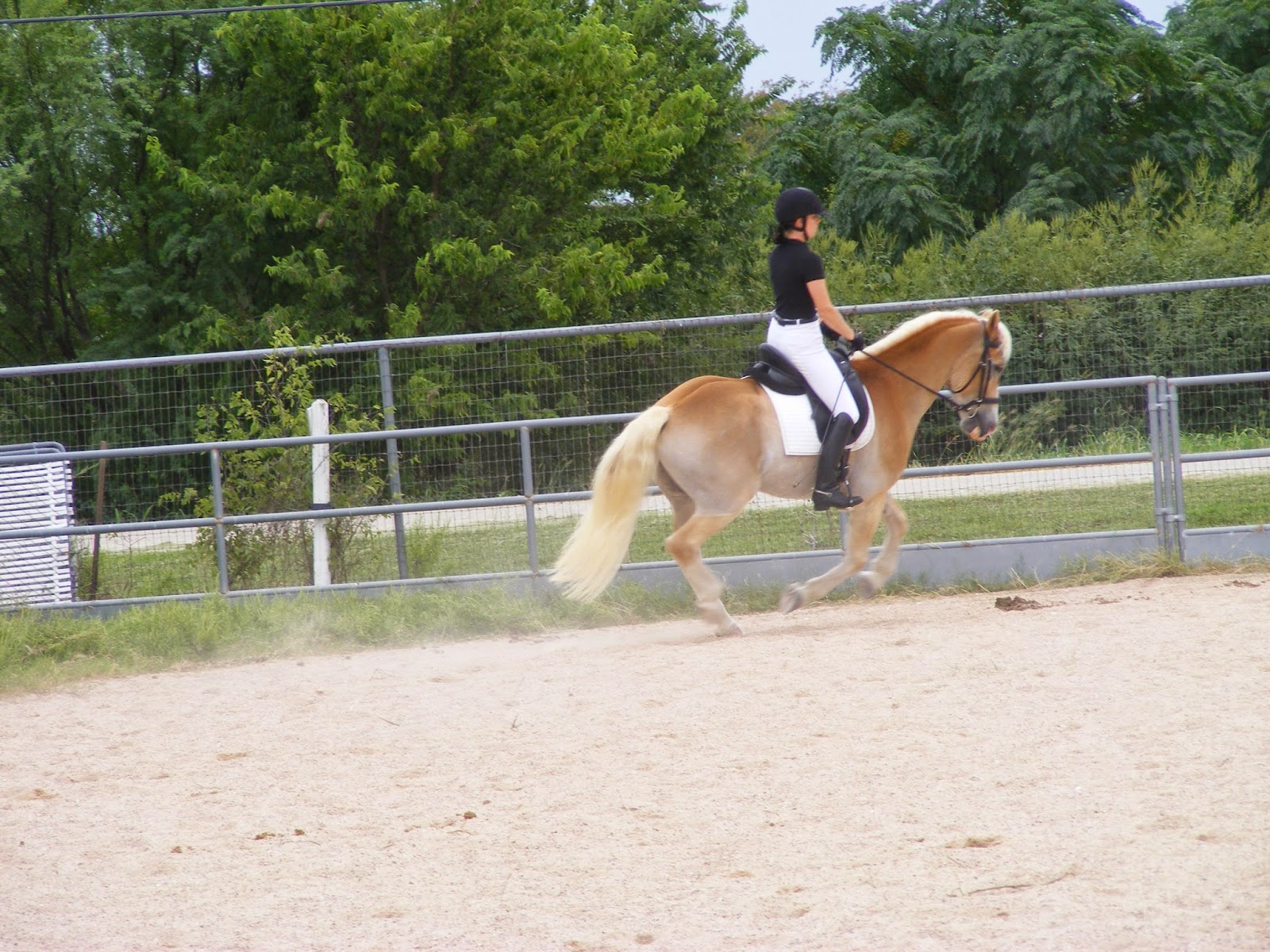 Unfortunately, the heat took its toll and when I asked him to start working again, I had no horse left. This is really quite odd since we often work at home for 45+ minutes, and he's always got gas in the tank. My best guess is that we usually work on fairly hard ground, and the footing at the show was deeper than he's used to so it sapped his energy much faster than usual. I got after him a bit in warmup, but he just wanted me to hold up his 9328237 pound head while he ran around on his forehand. I tried a couple of trot-halt-back-trot transitions, and while he did them, they were slow and lacked much effort on his part, despite rather unsubtle aids on my part. I resigned myself to a somewhat lackluster test and didn't ride as smartly as I should have, so our canter departs weren't terribly clean and our 20 meter stretchy circle was more like a 20 meter Western Jog circle. I also should have  kept my whip for the test - lesson learned there. We did more careening at the canter, tidily cutting off the corners at the end of the arena (oops) and generally being a freight train, but he was tired and just didn't have anything left to give. I was pretty happy we made it through all the canter movements without breaking gait, and managed to make the last centerline straight and tidy. I felt like it was okay, but not nearly as nice as our first test. Which was really unfortunate, since I was trying for a qualifying score for the year-end championships, and I didn't feel like that ride would give me the 62% I needed...

The judge and I disagreed on which test was better, however. :) 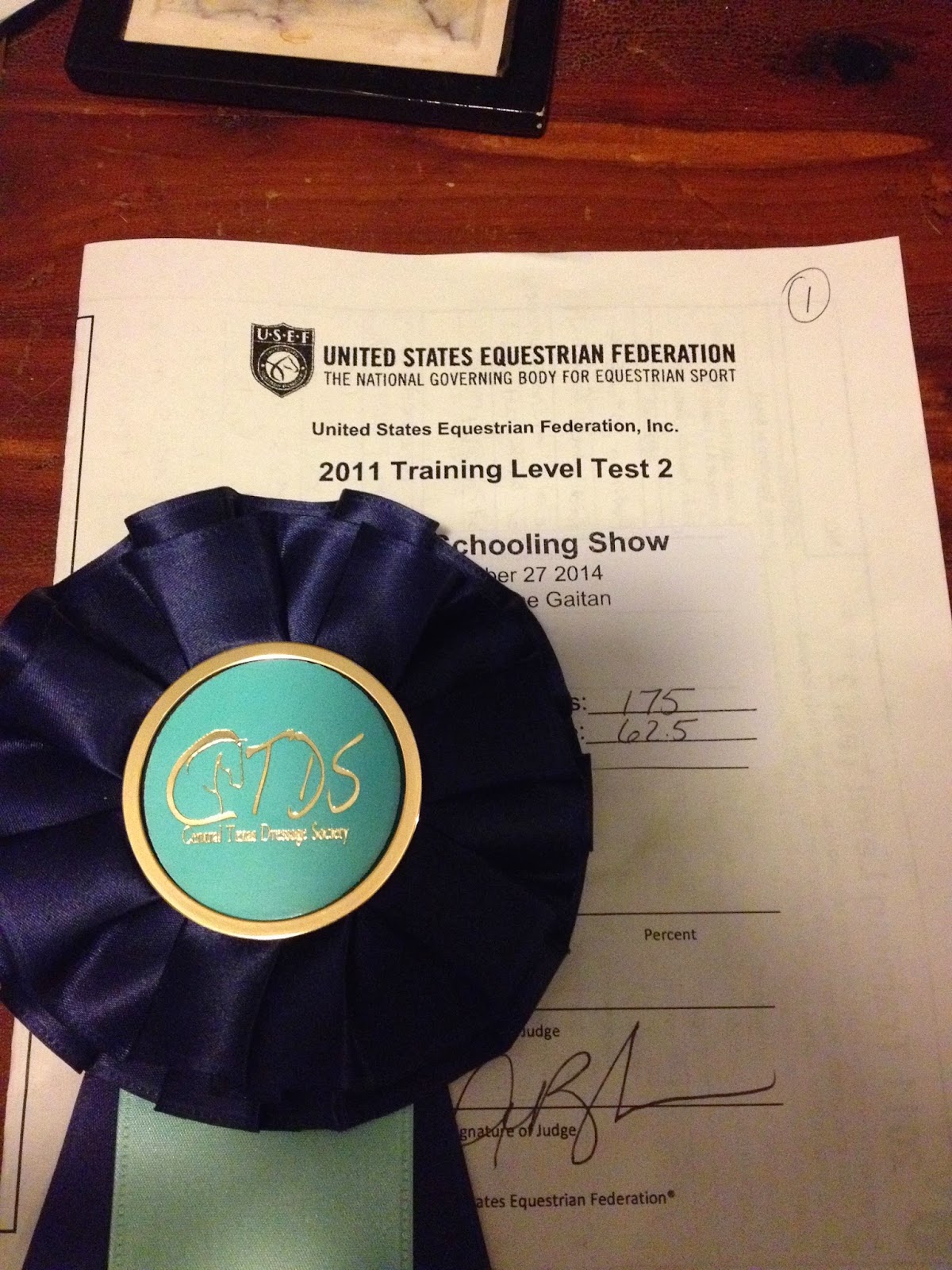 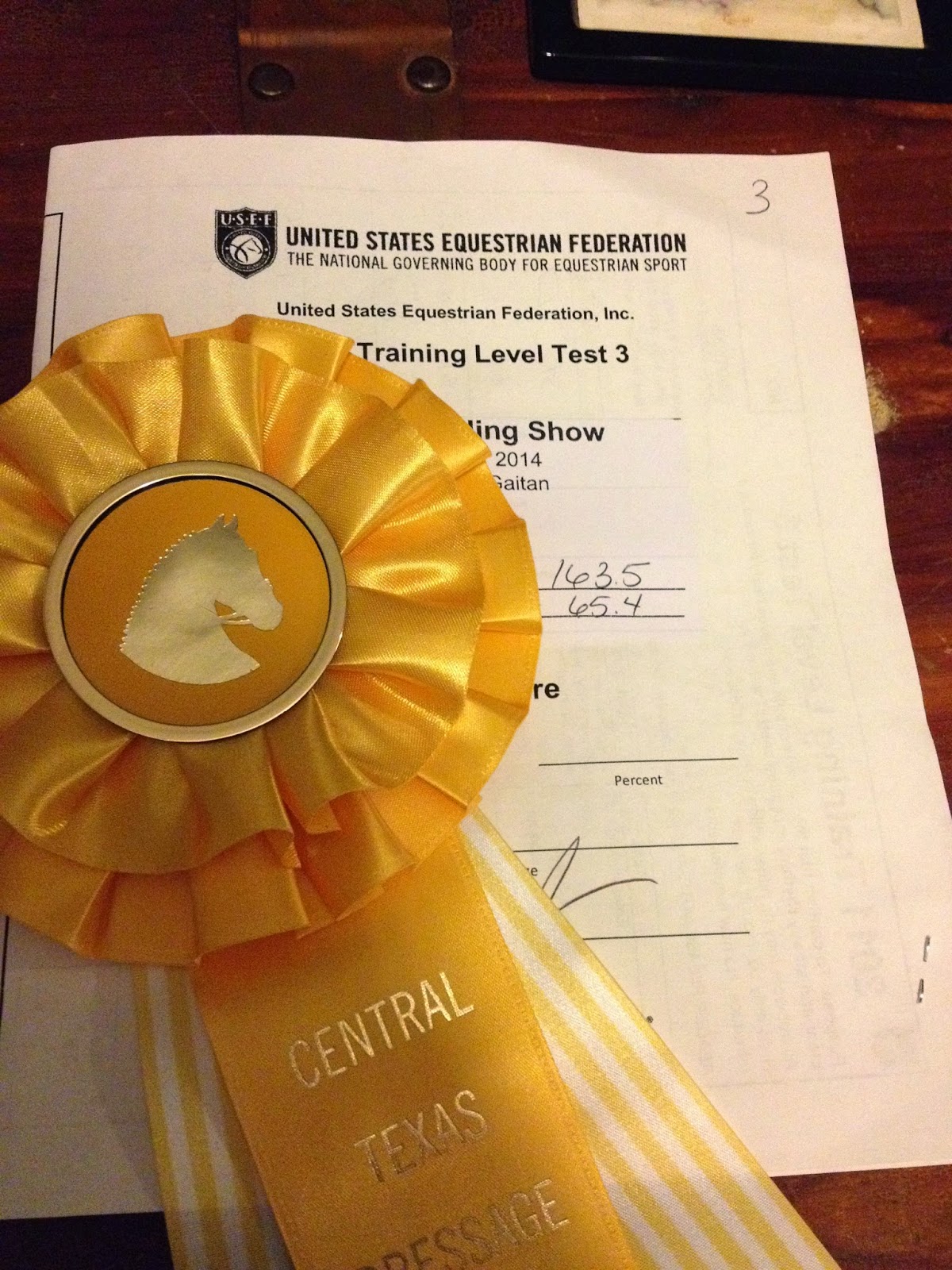 
I am still not sure how our second test managed to score a 65.4%, but since that score means that we get to attend the local championships in November, I'll take it! I guess it didn't look as bad as it felt? I get the videos tomorrow, so it will be interesting to watch them and compare the judge's scores.

I'll admit, though, I'm kind of thrilled. This is the first time I've ever qualified for any sort of year-end anything. Granted it's only a schooling show, and it's quite likely we won't have scores that will be competitive enough to place well, but I'm OK with that. WE QUALIFIED AND WE'RE GOING!!! 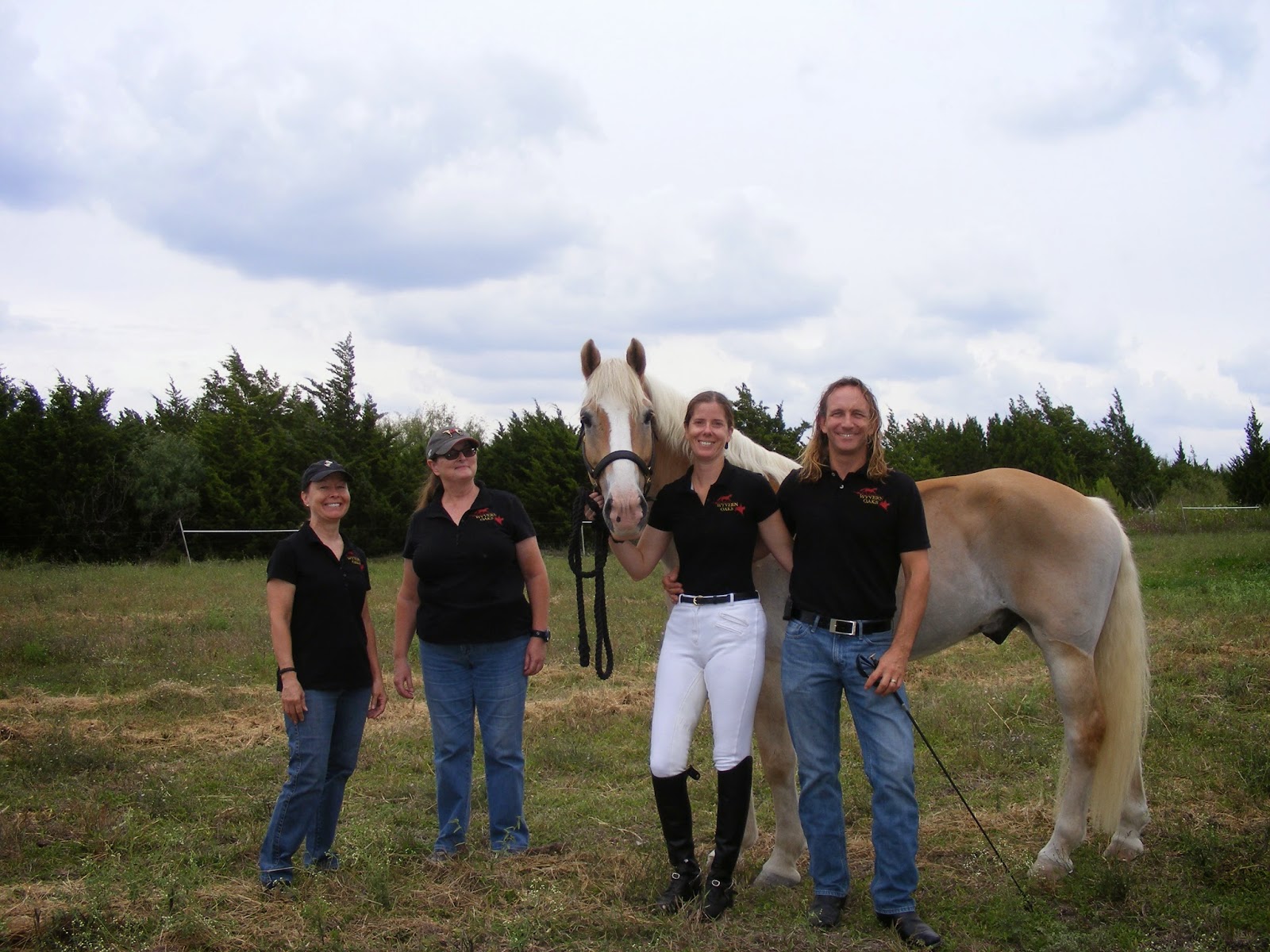 As always, thanks to the all the amazing Wyvern Oaks family for their help and support. Fuzzypony (aka "The Reader"), MC (aka "She Who Makes Things Tidy"), Paddy "The Poser" Haffington, and Hubby (aka "Mr. Moral Support").