On Saturday, we went to a very small dressage/CT schooling show. I hadn't expected to go to the show - it was Thanksgiving weekend and my parents were in town, plus we were a (very very) late entry. But the very nice folks at Rolling Ridge Stables found room for us in the schedule, so we went!

I was kinda excited about it for a couple of reasons. First, since we didn't get to go to the local GMO's championship show, I hadn't gotten to get all fancy with the new coat and braids and such. I decided that even though this was a teeny schooling show, I was gonna deck Paddy and myself out to the nines. Secondly, our lessons have been going REALLY WELL. We have tons to work on (SO MANY THINGS), but each ride is so much better than the last, and I was curios to see how it would go at a show. Finally, it was on my secret bucket list this year to show first level, even if we sucked. I figured that this was as good a venue as any to pretend that we could do a first level test, lol!  I picked 1-2 instead of 1-1 because there's less canter in 1-2 (and we all know that canter is not yet our strong point) and because there's leg yield in 1-2, which we're pretty good at if we have it together. 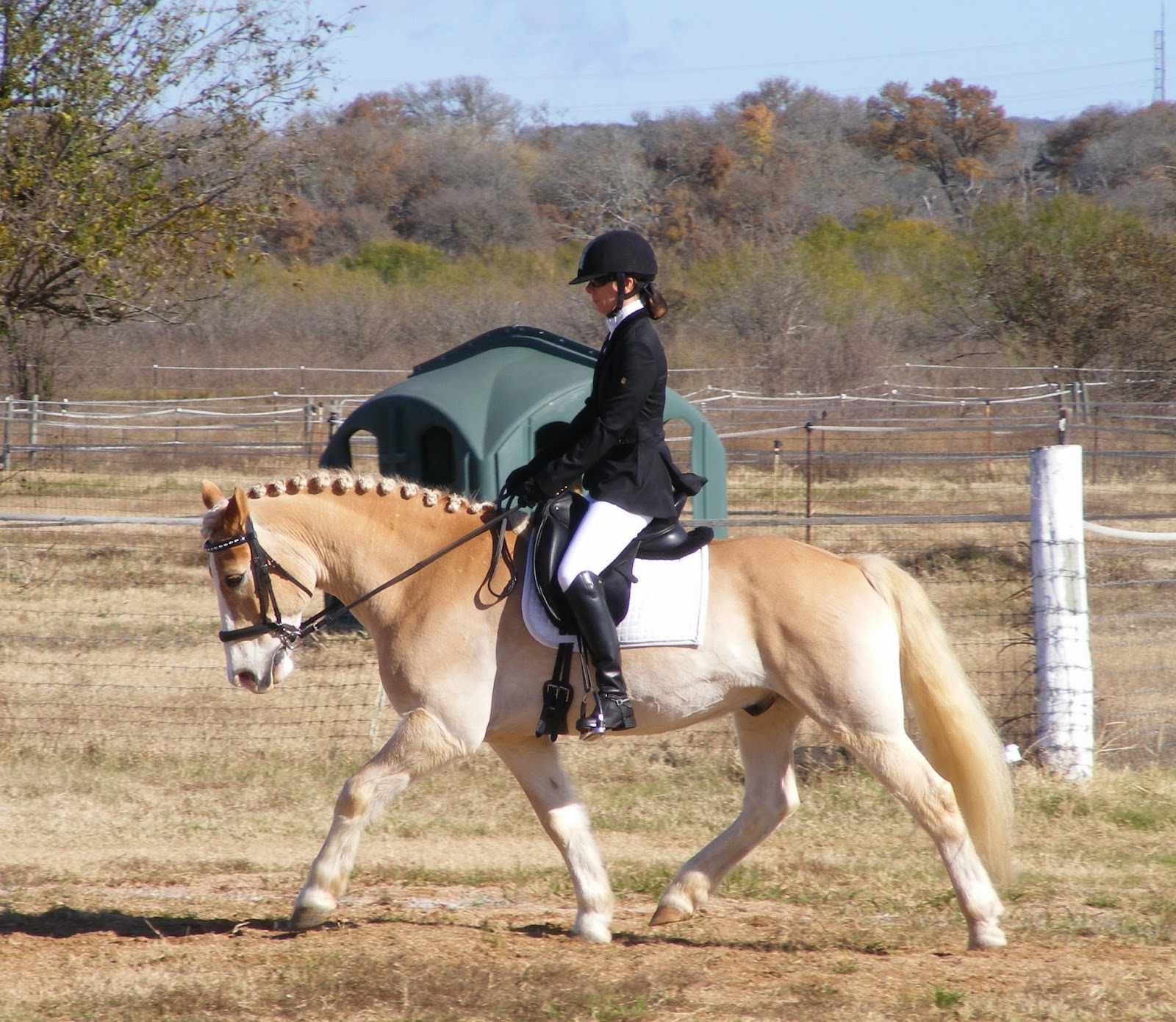 Warmup. We only looked this good part of the time... 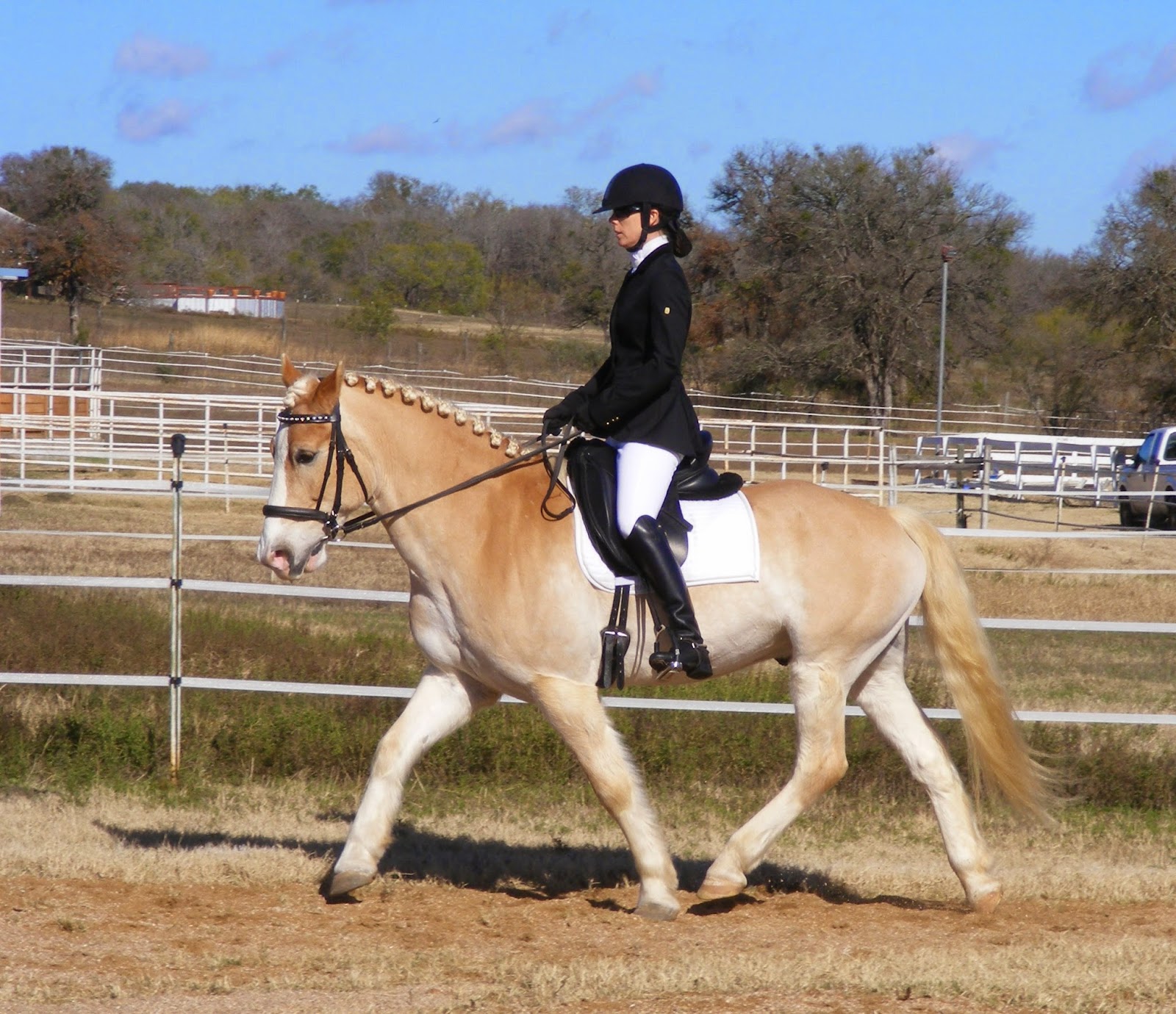 
For our first test, we did Training 3. The wind was whipping and there was some stuff to look at, but for the most part he was pretty focused on me. As you can see in the video, he's not relaxed over his topline or through in this test. That's still a huge struggle for us, and if I start pulling, he pulls back and it just goes downhill from there. You can see I'm riding pretty defensively, BUT! I felt like overall I did a better job of applying more leg and less hand than in many of our previous tests, even if it didn't necessarily look as pretty. We also had some really nice canters, which I am very proud of, although you can see where he starts to fall on his forehand and race. As always, a work in progress.

We scored a 62.4 - the scoring was stiff but very fair and accurate, and honestly I prefer harder scoring at a schooling show. In the comments we got "Rider needs to more effectively keep horse on the aids." LOL! So tactful, but yeah - ride with your seat and legs and STOP PULLING ON YOUR HORSE.

We had one test (Fuzzypony on Taran) before First-2, so I went and tried to get Paddy more on my seat aids and remind him about laterals. As usual, our second test was much better, and I am SUPER PROUD of this test. It wasn't an amazing debut into first level or anything, but he was SO obedient and tried SO hard for me.  I really could not have asked for any more.

You'll see that I'm still too strong with my reins, but I did try to let go when I realized what I was doing. You'll also see the bobble in the right lead canter circle, where he broke. That was unfortunate, but he just couldn't hold it together so we took a few trot steps and fixed it. Our trot lengthenings were quick instead of forward, but since he wasn't truly over his back, it was all he could do. Our canter lengthenings... well, we survived, even if we did careen around the end of the arena after! We did get really good scores for our canter departs and our trot half-circles, and even 6s on our leg-yields, although I totally lost his haunches on the leg yield left. Getting him off my right leg is a struggle - we can do this movement well, but only if he's balanced and on my aids. And I just can't get him there consistently - yet. :) 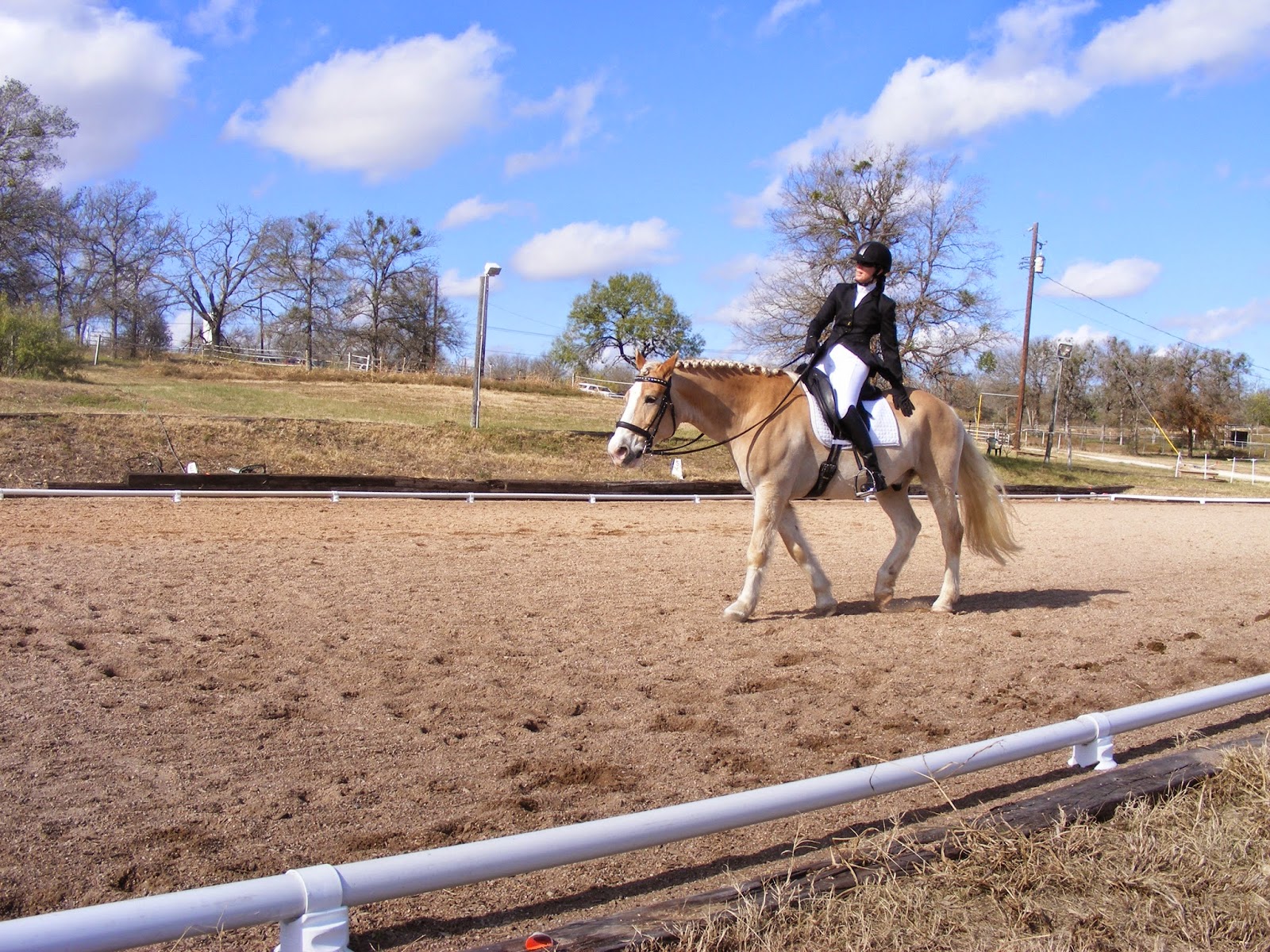 Still, he is the Best. Haffie. Ever.

We ended up with a 61.3, which I am super extra happy with! We had some 4's and 4.5 on coefficient movements (stretchy trot fail, anyone?), but he tried so hard on everything else, and those points are rider error anyway. The judge commented that he wasn't strong enough for some of the movements today, and she's absolutely right. He's not strong enough to be balanced all the time, and I'm not together enough to help him, which makes the laterals and lengthenings difficult to perform. It will come in time, though! We were the only ones to ride 1-2, so we got a blue "participation" ribbon.

After, we tried to get some pictures, but Paddy wouldn't have it. I think these are the ONLY pictures I have where his ears aren't pricked at the camera. 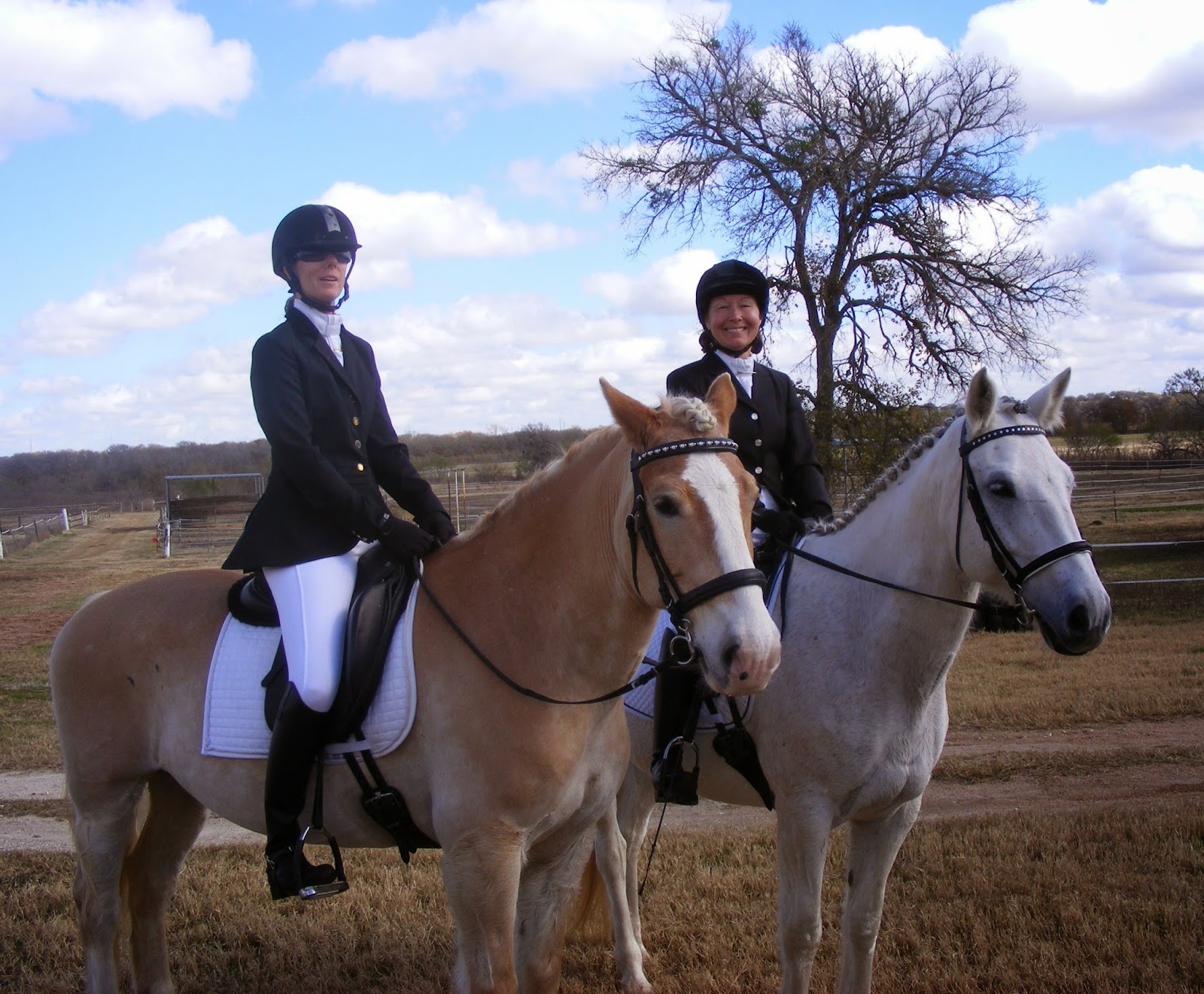 Haffie not interested in pictures with cousin Taran after ride. Haffie want to go back to trailer and eat. 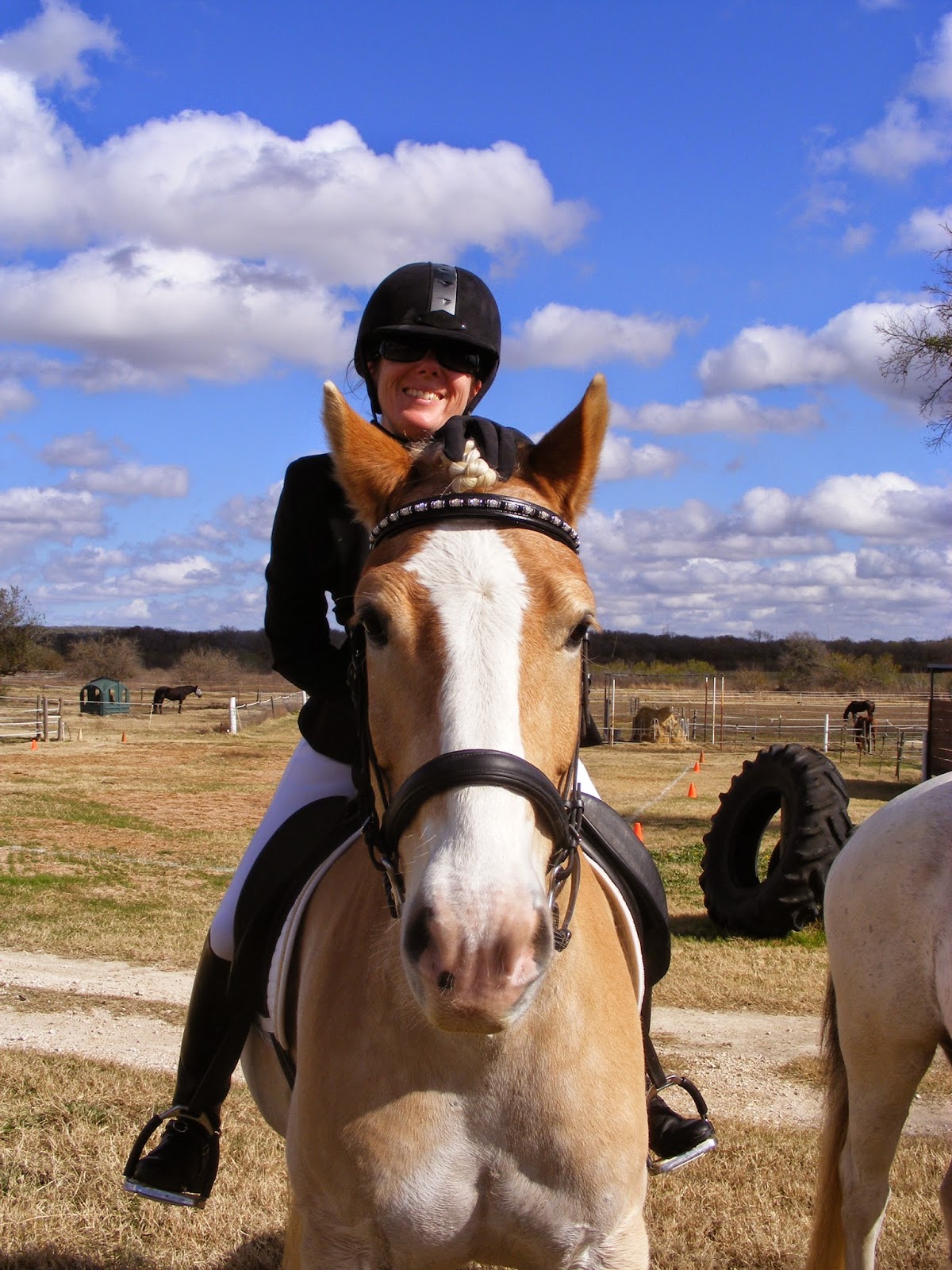 Haffie not amused by mom holding up earz. 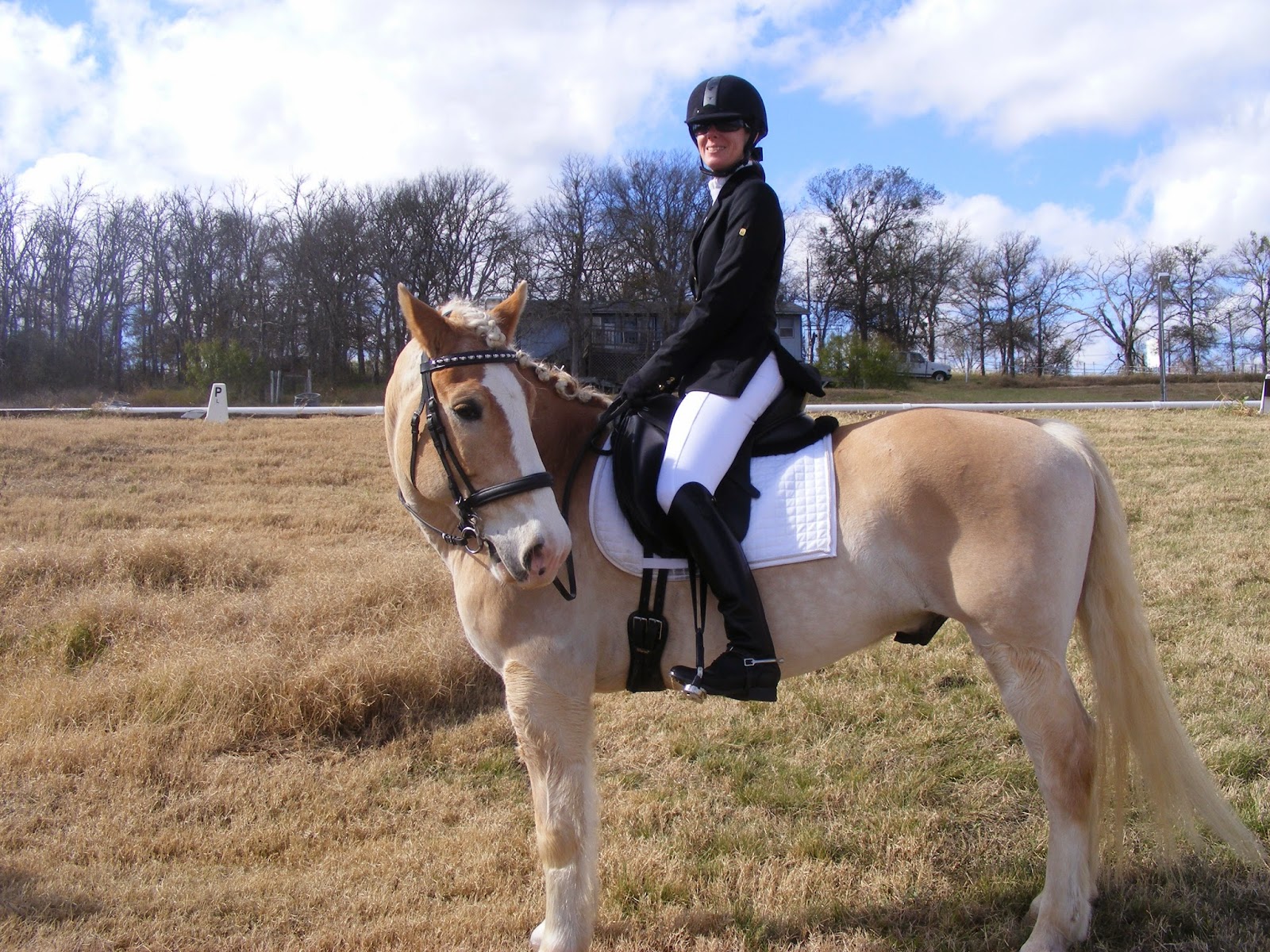 Trailer is that way, mom.

OKAY FINE I PUT MY EARZ UP HAPPY NOW?

* All photos and video courtesy of Otter Tails Photography (a.k.a. MC)
Posted by jenj at 11:17 AM