If you've ever met a Pyr before, you'll know that their obedience skills are almost nil. Our first Pyr, Anie, didn't sit, come when called, or walk on a leash.  Pyrs are also not known for fetching. Most of them will just stand there and look at you like you're an idiot if you throw something for them, and they most definitely do NOT pick up toys. Basically they're good at guarding, full stop.

However, Pyrs are known to learn behavior from other, older Pyrs. This is why you're supposed to match a young Pyr with a established guardian dog so they can learn the ropes of guarding. Apparently Pyrs also learn from certain Malamutants, because Gus has learned from Elias how to sit, lie down, walk on a leash, and come when called (Gus actually has better recall than Elias, which is a miracle). However, the concept of fetching seems to elude him. Elias LOVES to play fetch, but Gus just bounds after whatever you throw, pounces on it, then comes bounding back to you... without the toy. He squashed it, he killed it, problem solved. Guardian dog logic at its finest.

We've been trying to encourage Gus to actually pick things up when playing fetch, which sort of works... but the concept of bringing it back to the person who threw it is a whole 'nother challenge.

Hubby and I have learned to start with a big pile of toys, toss them till he fetches them all, then collect them and go again. At least it tires him out when it's raining outside, and it's sort of hilarious to watch a 115-lb dog bounce through the house. 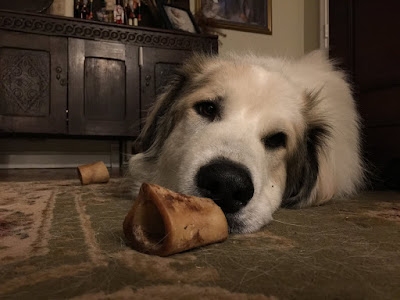