Things I do when I’m not riding (aka “hobbies”)

Someone started a blog hop about non-riding hobbies a while ago, but as usual, I'm late to the game. Plus it seems like all of our hobbies are horse-related – foxhunting, jousting, trail riding… so what’s left?

Laundry
You’d think we wouldn’t have much since there’s only two of us we wouldn’t have much laundry, but the reality is that we go through 2-3 outfits per day. Plus there’s horse laundry and dog laundry (omg how do horses and dogs make SO MUCH LAUNDRY???). I do at least one load per day, and often more. So I’m pretty sure this counts as a hobby. 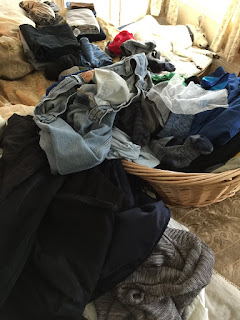 This was load #4 on Saturday. Note useless dog snoozing in the background.

Manure management
One of the challenges of owning horses on small acreage is what to do with all the manure. I spend a great deal of time mucking, then turning the pile, then spreading the “cooked” manure back on the pastures. At least I stay fit? 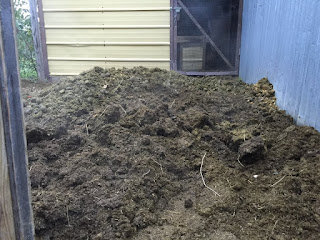 When they say steaming, they aren't joking. This pile gets HOT.

Cooking and baking
In the summer we tend to eat a lot of raw foods, just because it’s so hot out and turning on the oven sounds like a horrible idea. But in the winter, I basically want to bake everything and make roasts and soups and stews. I make most of our bread (I cheat with a bread machine), plus pizza crusts, focaccia, kolaches… ALL THE CARBS. I tend to keep ingredients simple and will go out of my way to find a recipe that doesn’t use processed ingredients (do you know how hard it is to find a recipe for caramels that does NOT use corn syrup? Or one for pumpkin pie that does not use condensed milk???). I’m pretty good at substituting when baking too. Not enough eggs? Add more milk. Don’t want to use that much butter, or hate putting oil in?  Use applesauce instead. It's kind of like a chemistry experiment. 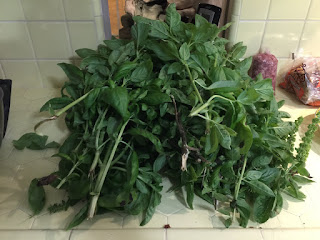 This giant pile of basil (from our garden) got turned into five jars of pesto.

Gardening
We have two gardening seasons here – spring and fall/winter. Our spring season starts around Feb 15 and I usually pull everything up around June 15 – after that it’s just too hot for everything except peppers, cucumbers, and squash. Oh and okra, which I hate. The fall/winter season is great though – Sept 15 through early February. We watch the weather pretty carefully so we know when to cover the plants, but usually the lows are above freezing so we don't have to worry too much. Right now we have broccoli, lettuce, kale, spinach, and a bunch of herbs. We generally get veggies for 3-4 nights per week out of our garden when it’s growing well. 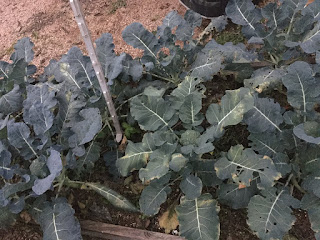 Broccoli! Did you know the leaves are edible too? You saute them like kale or spinach, with a little oil, garlic, and salt and pepper. Delicious!

I also can our tomatoes (whatever we can't eat fresh), and make jam out of the plums and peaches we get from our fruit trees.

Sewing
I used to sew a lot for our medieval reenactment and jousting, but now that we’ve got a decent wardrobe, I tend to sew in binges (like when husband needs a third gambeson because we’re going to a week-long joust with no chance to do laundry, or the week before a new nephew is born and I seriously have to get that baby blanket done). I’m pretty good at reverse-engineering something, and typically make my own patterns. Interestingly, I’ve never made anything “mundane” to use or wear – only clothing for medieval reenactment. I’ve never made a quilt (I get that question a lot), and I can’t knit or crochet, only sew. 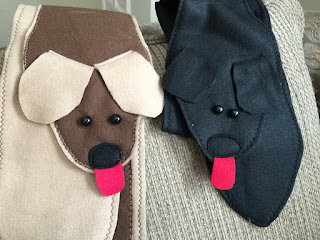 Scarves for my nephews - I found some pictures of a fox scarf online, and then designed these guys.

Some of my favorite pieces are this saddle pad... 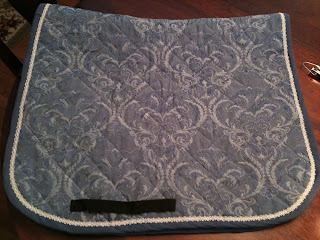 I made this back in 2013 and it still looks new. It's also everyone's favorite pad, so it sees a lot of use.

... and hubby's heraldic trappings, which are based on the trappings of Ulrich von Lichtenstein from the 13th century Manessa Codex. The trappings took over 200 hours to make and were a birthday present one year. I’ve told hubby to take care of them because he’s never ever EVER getting another set like them. EVER. 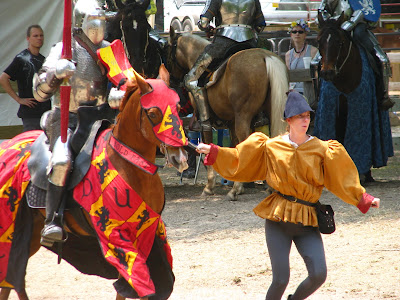 The solid squares have Gothic letters appliqued on them (it spells out Hold Fast Macleod, and the rein covers also say Hold Fast). The parti-colored squares are pieced together and each one has a wyvern appliqued on it. 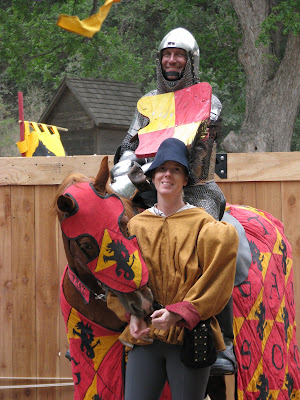 I think there are something like 41 wyverns on that sucker, each of which I traced on black fabric, cut out, ironed on, then appliqued over. NEVER AGAIN.

Reading
I’ve always got a book going, although these days the only time I have to read is right before bed, so I’m lucky if I get more than 5 pages in before passing out. I love historical fiction, but occasionally dabble in sci-fi and fantasy because hubby reads those and sometimes I'm desperate for a book. I try not to read anything too exciting because it will keep me up at night. I just finished Cryptonomicon by Neal Stephenson, which fits into none of those genres but was excellent nonetheless. Currently I’m re-reading Shogun by James Clavell, because it’s Shogun.

Working on the house
We bought this place 6 years ago and I'm embarrassed to say it's still a construction zone. Currently we're working on the trim in the hallway (ok, we've been working on it for like a year, whatever).  At least I have something to do when it's too hot to ride in the summer or too dark to ride in the winter! 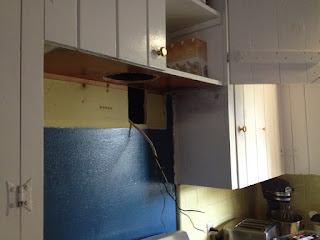 That day we decided to replace the vent hood in the kitchen (note the chai in the overhead cabinet).

Complain about the weather
This is a time-honored tradition around here. In the summer, it's too hot. Below 50? Too cold. If it hasn't rained, we're in a drought, and if HAS rained, there's flash flooding. Basically, we can't win, so we just whine instead. 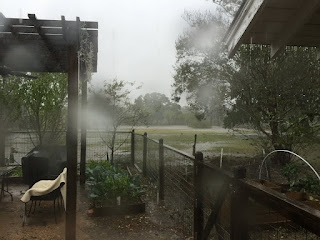 That one time when most of the back pasture was quite literally under water.