With Paddy and Brego laid up for some unknown amount of time, I considered taking up golf. I mean, I've only ever played mini-golf and I suck at it, but I've gotta do something, right?

(OK, kidding, golf is basically the last sport I'd take up. Like ever. Sorry if you love playing golf.)

Since BFF hasn't been riding much lately, and I'm desperate to get into the saddle, I volunteered to get Taran going again. He's got plenty of training and is generally sensible (when he's not looking at stupid stuff), but he's seriously out of shape. 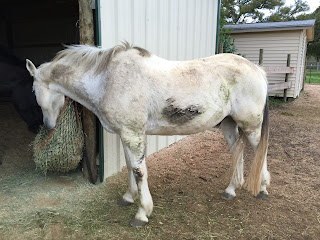 A bit of a rough customer. The green marks and black mud are where he *fell down* while galloping like a lunatic out in the pasture. Horses, I swear.

Since it's been wet for a while, rides have been limited to our road. For Taran, the road is a field full of dangerous things that eat horses. See those tar stripes? SO MUCH DANGER. 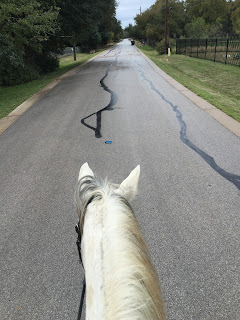 Also the trash can up ahead. And those little blue reflectors are terrifying. So are mailboxes. Bundles of sticks people have put out for trash day.  But you know what's not even the least bit concerning? The UPS truck driving by at 30 mph.

We've been working mostly at the walk, doing difficult things like keeping the hind end engaged and the shoulders up and not racing around and falling over his front end. I swear, just keeping track of those those things is a full-time job. Keeping his nose between his shoulders is also a challenge, because it's so much easier to just crane your neck left 30 degrees and throw out your right shoulder than it is to go straight. 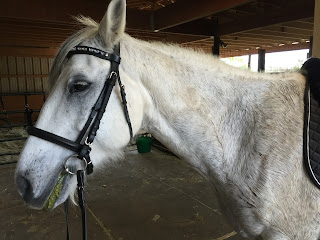 45 minutes of walking was exhausting. And yes, his topline really is that non-existent.

Riding Taran *correctly* is a challenge, but one that - for the first time in my riding career - I feel able to handle. Thanks to riding Paddy, I have a better feel for keeping a horse straight from nose to tail, and having him truly bend through his body instead of craning his head around and/or breaking at the shoulder. I know what it feels like when Paddy gets quick and falls over his front end at the walk, so I know when that happens with Taran I need to Slow. Way. Down. to let him think about his feet and allow him to find his balance. I know what it's supposed to feel like to have a change of gait that starts at the hind end - so when he flings his front feet up into a trot, it's because I didn't actually have his hind end engaged so he couldn't do it correctly. Conversely in the downward, if it feels like he's stopping his front end first and then his butt catches up, I know I need to work on slowing his hind end FIRST with my core and not pull back even the slightest bit, and so that he must sit down and allow his shoulders to come up into the transition.

We're making progress, despite Taran's best efforts to get out of work (trust me, he's got a lot of tricks up his sleeve). We've got a lesson soon and I'm looking forward to it. Taran's a fun ride and while he's definitely keeping me on my toes, I feel like I'm really making progress with him and that his evasions are nothing I can't handle. 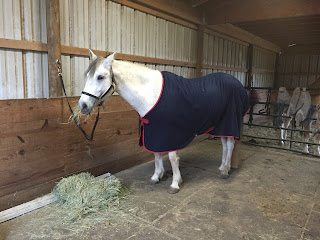 Except the spooking at the tar lines on the road. *That* is starting to drive me nuts!
Posted by jenj at 1:20 PM