Brego's death has cast a bit of a shadow on Wyvern Oaks. You never quite realize how much a presence affects everyone until it has gone. The whole place somehow feels a bit quieter, a bit emptier. Taran is despondent, and Paddy still occasionally calls for his big BFF.

And yet, life goes on without him.

This weekend, we had a schooling show where I did 2-1 and 2-2. Coming into it, I had high hopes that we were much more prepared than we were a few months ago. Taran is more through, better balanced, and has moments where he really shines in the movements. We'd had a lesson Thursday where his w/c/w transitions were really spot on. His counter-canter is stronger, and his transitions from medium to collected canter are actually starting to look like transitions instead of hopes and prayers. I'd even accidentally put on too much outside leg in the canter and he did a few strides of half pass (OMGOMGOMG). Plus, I'm trying out a new saddle that puts my leg in a MUCH better place, and really lets me sit around him.

Naturally, we nailed the warmup and then we both ran out of steam in the tests.

I find that it takes an incredible amount of core strength to ride a collected canter, and Taran doesn't yet the strength to do much collection, so I have to work really hard to help him. You simply cannot hold collection together with your hands, you HAVE to ride it forward and up from your seat and leg, and I just couldn't do it for very long in either test. The sloppier I got, the sloppier and less balanced he got. We had a lot of breaks, and a lot of very poor w/c/w transitions, despite the fact I know we can do those well. I also let him get very quick in the trot for 2-1, in part because I was soooo tense and that caused him to shorten up. 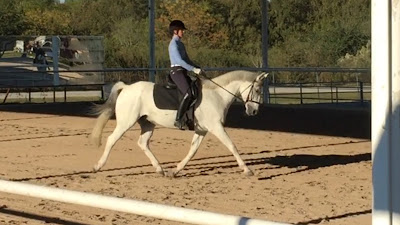 Like this was supposed to be a medium trot. Whoops. 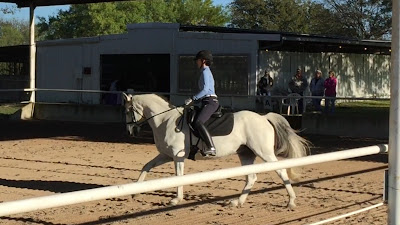 If that canter were any less collected it would be a medium. 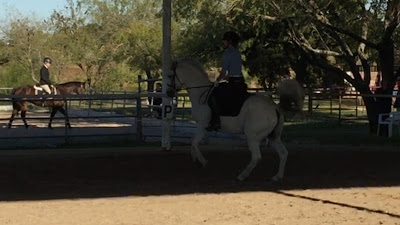 One of our more... expressive... walk/canter transitions. At least I know he can rock back on his haunches?

For 2-2, I realized that I didn't have the stamina to ride a tense test, so I made a conscious effort to relax and sit and slow down, and I think it helped. It was still a messy test, but it felt slightly less hurried and rushed. 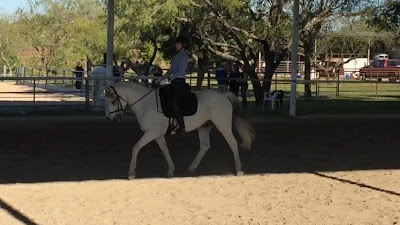 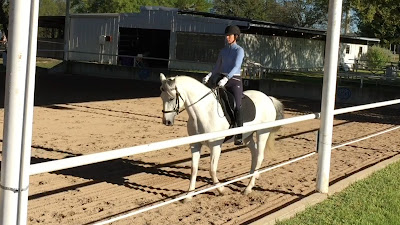 It's a shoulder in, can't you tell? 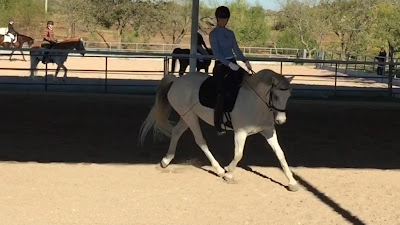 He can really step under himself if I ride him right and let him use his back.

When we were crossing centerline to do our two walk pirouettes, Taran took a HARD look at the shadow made by the covered arena. There's not much you can do when your horse has a moment except smile and kick on. Rather funny but we scored a 6.5 on both pirouettes. 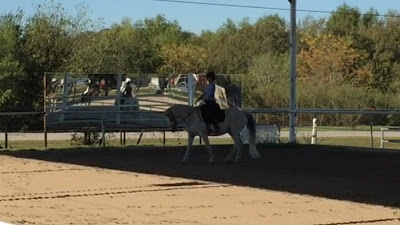 OMG WHO PUT THAT THERE!!!


The judge's comments on both tests can be summed up to "Needs balance and collection and SLOW DOWN." Totally, 100% accurate. Sure, we can do certain things really well at home some of the time, but this is a whole new thing for us both and it's upping the game significantly. I feel like the tests were overall better than the one we did in June (really? June? Damn, that was AGES ago) but we scored about the same (57.7 on 2-1 and 58.4 on 2-2). So while certain aspects of our rides are better, we have a long way to go before we can really put in a solid test. Fortunately we have all winter for me to get into shape so I can ride better!