Upate 5 of 5: A fairytale ending

No, I'm not dead. This blog might as well be, but everything at Wyvern Oaks is kind of awesome.

In case you're wondering where updates 1-4 have gone, I'm writing this in reverse order because I'm months behind. Whatever, you get the most fun stuff first.

If we're friends on Facebook, you know that the big news for me this year is that Taran and I qualified for and went to the US Dressage Finals in Lexington, Kentucky. Not only that, but we came away with something I didn't even dare to really hope for: a gorgeous, big-ass neck ribbon. That's right, T is top 10 in the nation for AA 1st Level Freestyle. 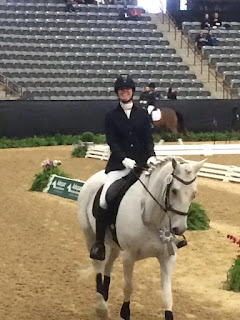 Victory lap in the Alltech arena. I only cried a little.

The entire experience of finals was like nothing I've done before. First off, before you show in the regional qualifiers, you have to "declare" your intent to go to nationals if you qualify for an invitation. There are two ways to qualify - you can either get 1st or 2nd place in your class, or you can get a wildcard score, which for freestyles is over a 66%. We qualified with a wildcard score of a 68.5%, with was 7th place.

Once you qualify, USDF sends you an email "invitation," whereupon you log into their website and pay the class fee for whatever you were invited for. In our case, this was not only the freestyle, but we were also "in line" to ride in the 2nd Level AA championships, because we were 3rd place at regionals. If 1st or 2nd place had declined the invitation, we would have been allowed to compete (note, this did not happen).

After that it was a matter of signing up for the show. Kentucky Horse Park is a little weird because you get your classes through one site, your RV reservations through another, and stall/shavings/hay through a third. Normally all these are included when I sign up for a show online, so I found it a little challenging the first time round. Luckily, things were all in order when we arrived after a long-ass, two-day drive with an overnight stop in Little Rock (also, hell hath no traffic like I-35 northbound from Austin to Dallas when a semi overturns and closes the Interstate for 2.5 hours).

Unfortunately, our first ride was at 8:40 a.m. on Friday, only 14 hours after we arrived. It was 30 degrees and quite windy, and poor T and I were both frozen. We had trouble finding the arena (it was a 20 minute walk from the barn and there were no signs) and so our warmup time was cut short. Luckily my trainer (who didn't go to Finals) had put me in touch with a good friend of hers, and he was on hand to help me warm up. Given that it was the first time he'd ever seen me ride (and uh, let's just say I'm pretty sure we didn't make a great impression), he did a great job jumping in and getting the job done. We rode a very stiff, uninspired, inattentive test for a 60.854, which was our lowest score to date. T stayed with me though and tried his best, but between the long haul, lack of warmup, and cold, I really didn't set him up for success. Lesson learned though - we really DO need a day to settle in if we're going to be competitive. 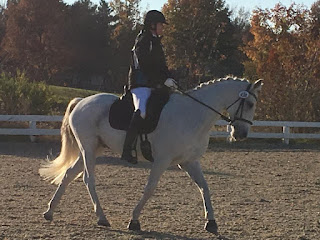 After our ride, I noticed that T was not very warm under his 200 gram blanket, BOT sheet, and neck cover. I tried to find him something warmer at the show, but none of the vendors had blankets, so we ended up going to a local tack store and picking up a 400 gram turnout with neck cover and belly wrap. Within a few minutes of bundling him up in that, he toasted right up and started eating and drinking more normally. Note to self: Texas gear is insufficient for Kentucky temps. Also Taran prefers warm water. 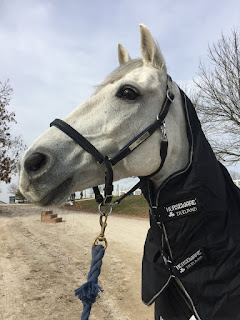 Why yes my fully clipped Texas horse is bundled up to his eyeballs. Not shown: me also bundled up in my ski pants and parka. It was 23 degrees, don't judge.

Day 2 had us riding 2-3 again at 4 p.m. It was much warmer, and I was own my own for warmup. Well, except for my awesome husband who kept reminding me to let T go forward and turn my thumbs up. I was determined to put in a more forward, uphill, and relaxed test this time, so took plenty of time to warm up and really focused on breathing and staying loose in the tack so T could actually move. We got into the ring and every time I felt him get stuck I let out my breath, relaxed, and put my leg on... and he started moving again. Lesson learned! We had our absolute best mediums to date, and our canter work was SO balanced and round.

Does anyone remember when we could barely even canter on the left lead?

Uhhhnnnfortunately, we also put in more mistakes than we ever have before. We had a break in the canter, someone fluffed a giant plastic trash bag next to the arena so we bolted in a 10m trot circle, we did a reining spin instead of a TOH, and he was super convinced I wanted to canter down centerline. So our new score was ALSO the lowest ever... 60.061. But we squeaked the 60 and completed his 2nd level performance award, which was why we were riding it. Besides, it was probably the best test quality-wise we've ever done (he also offered 2 piaffe steps in warmup), and I was super stoked about that. 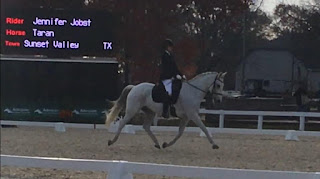 Seriously wish the pro photographer had gotten this one... alas, it's only a blurry screen cap of a zoomed-in video.

Our final ride was the Championships on Sunday morning. We were 4th to last in order of go (they do a draw by computer), so I had a fairly relaxing morning to prep. We had another good warmup (with coaching this time, woohoo!) and there was a scratch so we got to go a bit early. Overall the quality of the ride was not nearly what we had the day before for 2-3, but it wasn't bad either. We had two mistakes - we missed the first change in our line of 3 but managed to make it up, and he spooked at A when a hoof hit the arena wall (driver error, whoops). We got a little behind the music after those mistakes and I had to scramble a bit to catch up, but it worked out mostly OK. It definitely wasn't the super brilliant test I wanted it to be, but we got around and kept it together.

I had my back to the arena and was talking to my coach about how it went when his eyes lit up, and I turned around to see the scoreboard: 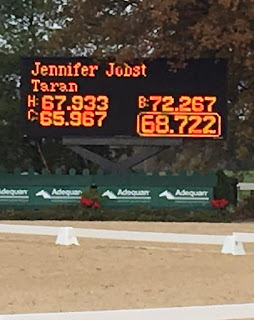 Hell yes I will take that. Also judge at B, I love you.

There was much frantic scrambling for phones to check how my score compared with the others (aside... did you know that iphones will brick when it's too cold? Just FYI), and I was sitting in 8th, with 3 riders to go.

And we managed to hold on for 9th. 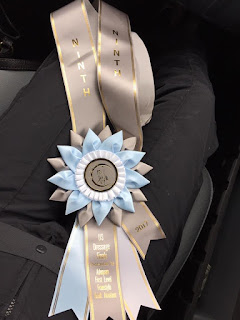 I am so proud of this piece of satin it's kind of ridiculous.

I know we had mistakes, and I know it's only 9th place. But that damn ribbon couldn't mean more to me than if it said Champion on it and came with a fancy cooler. I am riding a tiny 15.1 homebred pony cross against warmbloods imported from Germany and holding my own. I've been told more than once that I'd need a fancier horse to be competitive... and yet, here we are. We have come so far in the last two years, and worked so hard for it, and we are not done yet. 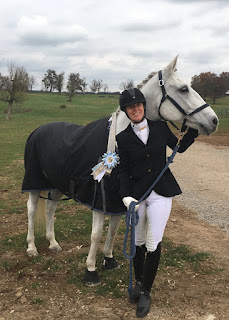 Taran not care about fancy ribbon. Taran care about friends OVER THERE.
Posted by jenj at 12:04 PM